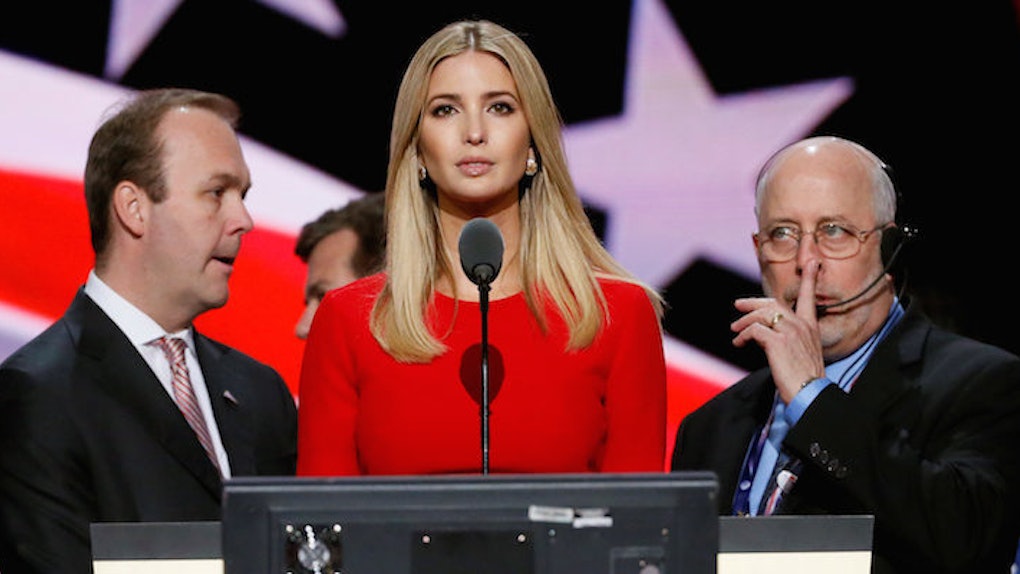 Ivanka Trump, daughter of Donald, has been continuing her work as a businesswoman through her father's campaign.

Most recently, her work included tweeting this:

This tweet really pissed people off for a handful of reasons. Let us count the ways.

First of all, Trump (or, realistically, whoever is handling Trump's social media) chose to use an emoji of a black or brown woman. She could've kept it neutral with the standard yellow emoji but instead went with an emoji of color.

In addition to that, Trump used #nomoneynoproblems.

This is especially ire-inspiring given the topic at hand.

Unpaid internships are ventures that systemically help the privileged rise while holding the non-privileged back.

The only people who can reasonably get unpaid internships are those who can afford to not work for money in the summer. More often than not, it's people who have something like family support.

Unpaid internships favor those who come from money and live in or near major cities, which is awful because internships really can provide great opportunities for career growth.

But by not paying interns, companies participate in a system that actively stunts underprivileged young people.

Bulin acknowledges this is her third unpaid summer in New York City -- apparently indicating Trump does not pay interns.

As someone who herself benefitted from being born into privilege, Trump is perpetuating a harmful cycle by only opening certain opportunities for those who can afford it.

Meanwhile, as many pointed out on Twitter, it's highly unlikely Trump even comes close to empathetically understanding what it's like to struggle on no income, without a rich family to support you. That makes this tweet extra insulting.

The tips Bulin and her fellow interns provide in the post are all quite useful. They say you can save up during the school year, work a part-time paid job, set budgets and ask for reimbursements.

These are all great pieces of advice for anyone, except unpaid interns. I mean, living in New York City is insanely expensive, stressful and costly, even with a full-time salary.

And on top of that, unpaid internships are struggles companies shouldn't be perpetuating: They're damaging to class mobility.

Back at the Republican National Convention in Cleveland, Trump gave a speech supporting things like equal pay for equal work, paid maternity leave and affordable childcare.

Ivanka, to stand up and give that speech at the RNC, you've clearly got some benevolent leanings and want to help people survive and thrive. If you really want to practice what you preach, though, you have got to pay your interns.