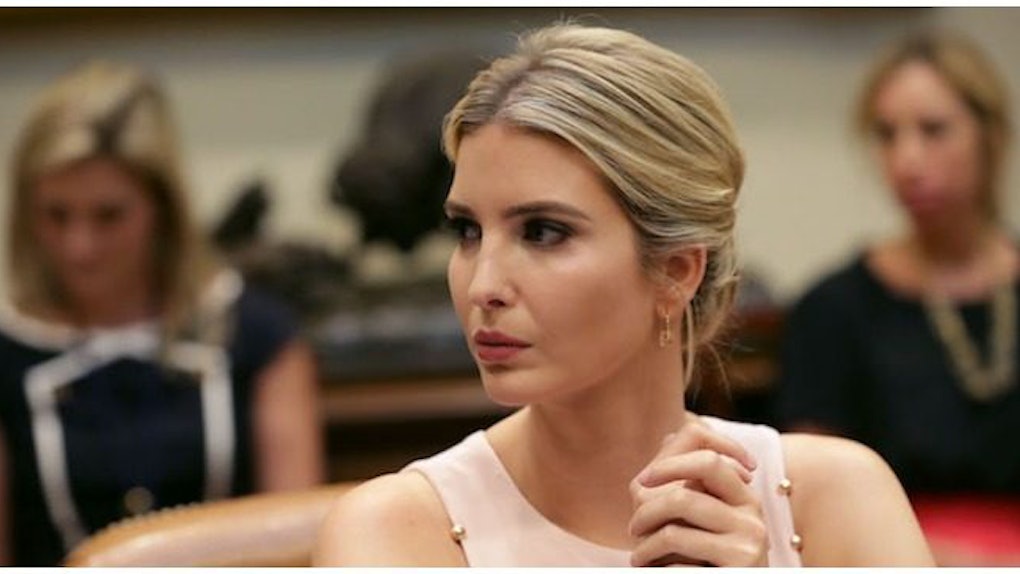 Ivanka Trump Quote About Working With Donald Trump Is Strange

In a rare interview with Financial Times published on Sept. 14, Ivanka Trump said that critics have "unrealistic expectations" of her relationship with President Donald Trump and that she doesn't criticize her father because she's "part of a team." Despite the fact that daughter Trump is an official adviser to her father and famously positioned herself during the campaign as someone who can influence the president, she says people should stop asking so much of her. Um, OK.

Let me repeat that: she says that it is unrealistic to expect a White House adviser to, you know, advise.

In the interview, she said,

Some people have created unrealistic expectations of what they expect from me. That my presence in and of itself would carry so much weight with my father that he would abandon his core values and the agenda that the American people voted for when they elected him. It's not going to happen. To those critics, shy of turning my father into a liberal, I'd be a failure to them. ... I think it benefits the president to be able to hear from people who both agree and disagree with him on any given issue. And then, ultimately, the president makes his own decision.

While it's true that it would be ridiculous to expect any of President Trump's advisers to have singular influence over him, this seems to be an instance of Trump trying to rewrite history. After all, as recently as late April, she said in interviews that she intended to be a "moderating force" on her father's administration, per The New York Times. At the 2016 Republican National Convention, she said of her father, "He will fight for equal pay for equal work, and I will fight for this too, right alongside of him."

Which is why people become borderline apoplectic when stories like Trump's "blessing" of her father's decision to end an equal pay rule come out.

It is her view on public criticism of the president that can perhaps give us insight into how she views her critics' demands. She told the Financial Times,

But there is a stark difference between voicing public dissent and undermining your own team. Especially when, again, people are looking to her to become the moderating influence she painted herself as. When she remains silent on her father's decisions -- like the trans military ban -- she makes herself seem utterly ineffective and even borderline apathetic to the people for whom she said she would advocate. Even former presidential candidate Hillary Clinton says that Trump must be held accountable if she is truly a member of her father's administration.

And the FT interview tells a different story from the one Trump wants so desperately to push. Behind the scenes, according to the publication, she often uses her relationship with her father to outflank her rivals and leverage her influence to fight for passion projects which "will help define her legacy." So that doesn't exactly sound like someone who thinks her own presence lacks "so much weight."

Rather, it sounds more like someone whose voice isn't as influential as she would like. Take, for example, the Paris Climate Accord. Trump and her husband, fellow advisor to the president Jared Kushner, reportedly fought for President Trump to stay in the agreement. But, according to Politico, once President Trump announced the U.S.'s withdrawal, Trump moved on quickly, having "taken the defeat in stride."

She also took over for her father at the G20 Summit in early July, attending at least one session in the president's stead. That she is apparently influential enough to sit in the stead of a head of state among leaders from the world's 19 most powerful countries and the European Union doesn't quite jive with her assertion that people are asking too much of her.

So if Trump keeps peddling this narrative that she's really not the person she positioned herself as, perhaps she should go back to the controversial shoe game.