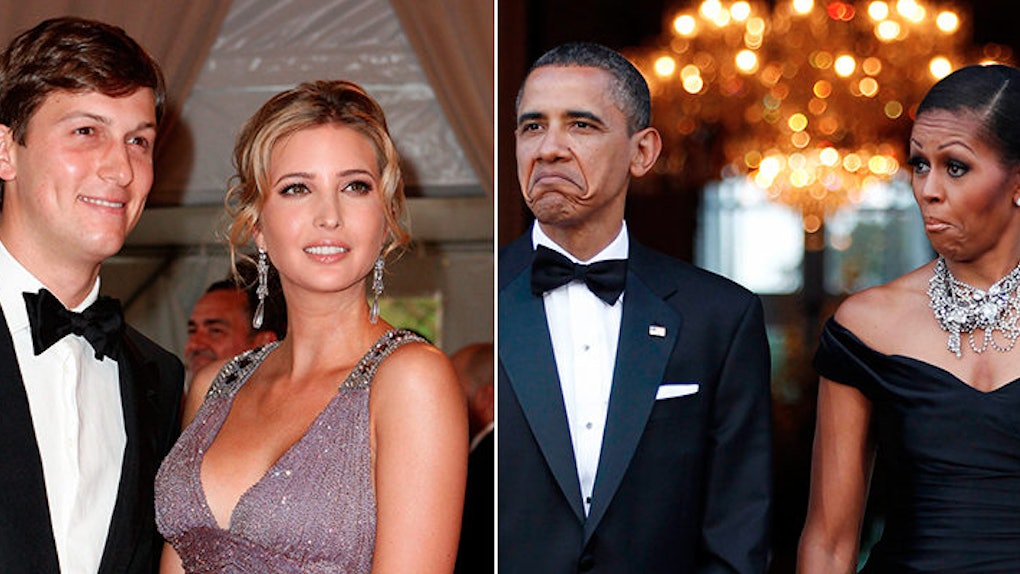 Ivanka Trump's New Home In DC Is Right By Obamas

It looks like Ivanka Trump's new home just happens to be very close to her old foes, Barack and Michelle Obama.

After her family contentiously campaigned for months against Hillary Clinton and, by extension, the Obama administration, Ivanka and husband Jared Kushner will live less than two blocks away from the new home of the current president of the United States, according to Washingtonian.

Washingtonian cites Washington Fine Properties co-owner William F.X. Moody as their source, reporting that Moody confirmed to the publication Ivanka had completed a deal for a new house in Washington, D.C.

And though Washingtonian reports Moody did not disclose the location of the deal, the magazine cited "multiple real-estate sources" saying the Trump heiress and her husband chose their own white house: the six-bedroom, 15-bath home pictured below.

The listing for the home on Redfin.com, says the three-story, 6,666 square-foot structure was sold on December 22 for $5.5 million, though Washingtonian points out it's unclear whether Trump and Kushner purchased the place itself or will rent from the buyer.

The listing also shows the home is in D.C.'s Kalorama neighborhood, the same community where the Obamas reportedly purchased a $4.3 million home for their post-White House lives.

That deal landed Barack and Michelle a nine-bedroom, 8,200 square-foot house, which the commander-in-chief says was purchased so the family could stay in the D.C. area while their daughter Sasha finishes high school.

We're going to have to stay a couple of years in DC probably, so Sasha can finish. Transferring someone in the middle of high school? Tough.

Though it's unclear how much time Ivanka and Kushner will actually spend in D.C., the deal for their new house does welcome questions about conflict of interest for a Trump White House.

Ivanka has long been touted as the one who would oversee President-elect Trump's business interests going forward -- a fact that welcomes its own ethical issues.

But now, a new home in D.C., away from Trump headquarters in New York, begs the question of whether or not Ivanka and her husband will be more involved in her father's policy-making.

The answer, according to an Ivanka ally? Not really. People reported a source close to Ivanka as saying,

Everyone is adjusting to these new circumstances during the transition period, and while Ivanka has no intention of taking a formal role in the administration, she plans to be an advocate for issues she cares deeply about.

Good luck getting everyone else to believe that.

Citations: Ivanka Trump Will Move into a House in Kalorama (Washingtonian), Ivanka Trump Is Moving to Washington, D.C. – and She'll Have the Obamas for Neighbors (People), Peek inside Obama's post-presidential pad (CNN)