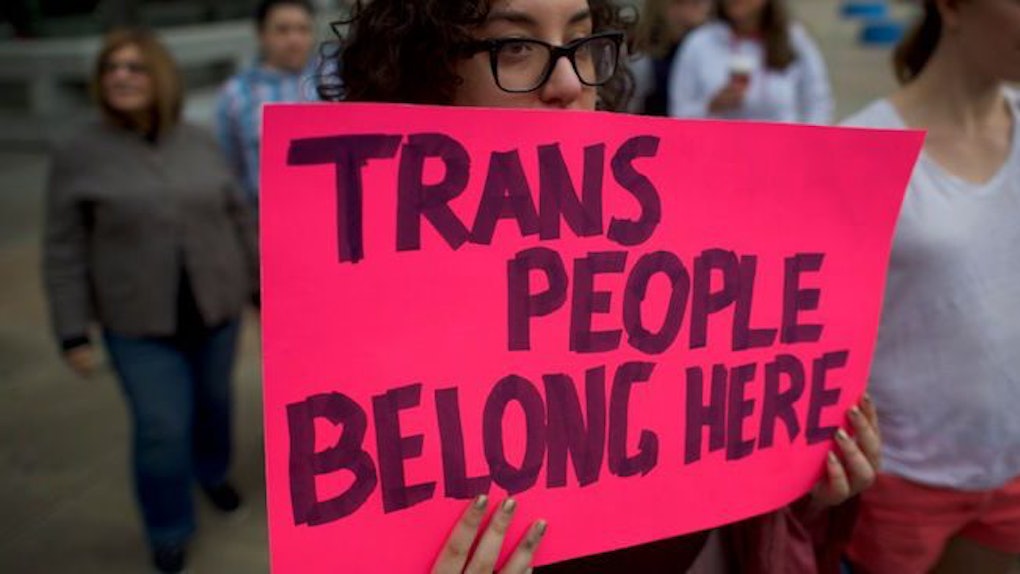 The 85th session of the Texas legislature has come and gone, and it's one that will be widely remembered as one of the most harmful sessions in modern history for the Lone Star State.

The 140-day session saw Texas become a "show me your papers" state, targeting undocumented immigrants, the passage of yet another anti-abortion law, and fighting between legislators that culminated in death threats on the final day they met.

The session will stand out in Texas history in another way, too: as the one that embroiled Texas in a bitter fight over whether transgender Texans should be allowed to use restrooms and locker rooms that match their gender identities.

SB 6 would have banned transgender Texans from using restrooms and locker rooms in state-owned buildings and schools if the facilities didn't align with the gender on the student's birth certificate.

If schools did not comply, they would have been forced to cough up thousands of dollars. It was one of 25 bills that specifically targeted the LGBTQ+ community, including one that would allow foster care service providers to refuse to serve LGBTQ+ foster children and parents based on their religious beliefs. That bill, HB 3859, is headed to the governor's desk.

Thousands of advocates, myself included, breathed a sigh of relief on May 29, the final day of session, when the legislature adjourned without passing any "bathroom bills," even knowing that there may be a special session on the issue this summer.

This was the fourth session I'd participated in, having started on this journey back in college as a student advocate, and culminating in my role as Government Relations Manager at Equality Texas this session. I know better than most that to have defeated SB 6 and 23 other anti-LGBTQ+ bills should absolutely be considered a victory.

The problem is, even if all 25 bills were defeated, merely introducing anti-LGBTQ+ legislation harms LGBTQ+ youth.

Why Introduction Of These Bills Harms LGBTQ+ Youth:

It has always been dangerous to be transgender in Texas, and public restrooms have always been a source of anxiety for our community.

The safety net that existed before SB 6 rested in the fact that most Texans had no idea they were sharing a restroom with a transgender person, or simply allowed themselves to be momentarily confused by a cohabitant's gender — before walking away and going about their own lives.

That safety net is gone.

I myself identify as genderqueer and genderfluid, and what that looks like on my body is a meticulously kept androgyny that gets me an equal amount of "sirs" and "ma'ams" from strangers. Before SB 6, using a public restroom was an experience marked by double takes and confused glances, but it was lacking in aggression or ill-will.

I had the privilege of being relatively safe in my visibility, and could turn these experiences into moments of amusement for myself. That privilege has evaporated before my eyes, and with it a sense of self-assuredness I used to have in these spaces.

After SB 6 Was Introduced, That Safety Net Changed.

The double takes and confused glances from strangers have morphed dramatically into punctuated glares and attempts to block me from entering public restrooms, especially those designated for women.

Even after whomever I offended and I have both exited the restroom, if we are both staying for a while in a restaurant, the glaring continues and the loud complaints about my existence lasts until one of us leaves. I'll always try to pretend I can't hear or see them, but the entire time my anxiety is bubbling up with thoughts of a shouting altercation in a room full of strangers.

I'm Not Alone In This, But My Experience Would Be Considered On The Tamer Side.

Parents of cisgender schoolchildren have learned to start looking for transgender children and interrogating schools about any that may attend their child's school.

Transgender children who have come out or been outed since SB 6 have faced levels of bullying by their peers intense enough for their parents to begin homeschooling them to protect them.

Transgender teens who simply wanted to use the restroom at a movie theater or restaurant have faced increasing amounts of harassment, misgendering, and threats.

I know this because I've met them in the fight to defeat these types of bills, as part of my job. Their parents tell me every time I speak with them that it was never as bad as it is now. We all know it.

And SB 6 is just one bill of 25. Every time an anti-LGBTQ+ bill is introduced, I've watched as lawmakers become "inspired" to create newer, crueler ones.

For example, last session, there were a small handful of bills that targeted LGBTQ+ Texans through religious refusals, meaning businesses could have refused to serve LGBTQ+ Texans on the basis of their own religious beliefs.

One of these few bills, HB 3864, targeted LGBTQ+ foster children and parents. Not only did that same bill come back this year with enough support to pass, but it was one of 17 religious refusal bills. These new bills included religious refusals for therapists and doctors, two breathtakingly cruel new ideas that would have placed members of our community in dangerous situations.

The harm of anti-LGBTQ+ bills doesn't just come from within the state, either. It's easy to track the progress of North Carolina's HB 2, a bill that rolled back civil rights and targeted transgender public restroom use, and to observe how it inspired the birth of Texas' SB 6.

The two were compared and contrasted for the entirety of Texas' session, both with horrifying consequences for LGBTQ+ youth.

Throughout this nightmare, I've seen the fear, anger, sadness, and confusion in the eyes of the targeted children. I've been in closed-door conversations about how to reduce the risk of suicide for these children, in the wake of the continued attack on them carried out by a few unhinged legislators.

What I've learned is that defeating hateful legislation can only be the first goal.

We still have work to do there; the governor could call a special session on the bathroom bill anytime, and HB 3859, the foster care religious refusal bill, is headed to his desk.

Texans who are concerned and against these laws should call Governor Greg Abbott at 512-463-2000 and tell them they oppose a special session on bathroom bills and the passage of HB 3859.

The end goal must be reaching the session where there are no attacks on LGBTQ+ people, as soon as possible.