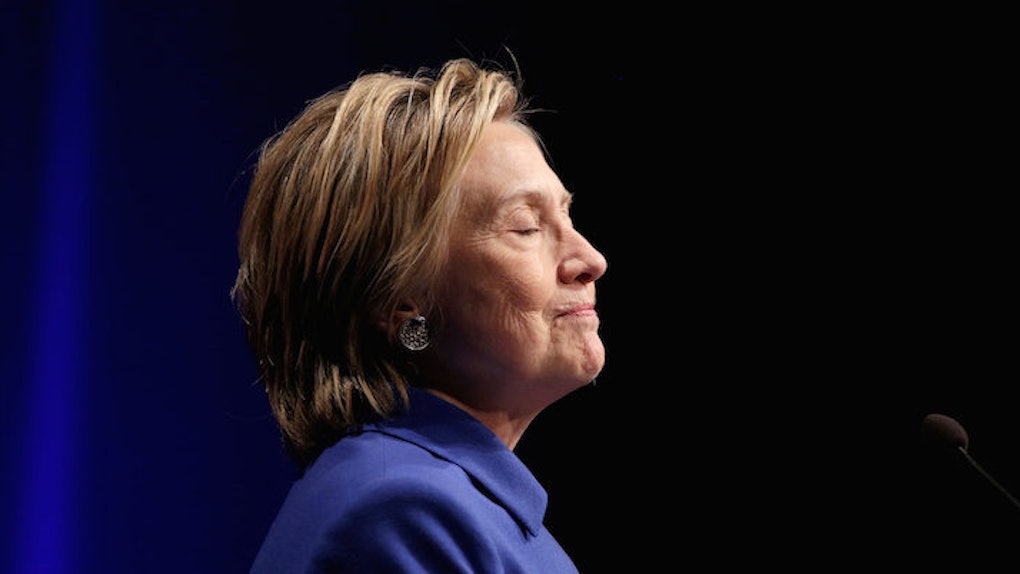 Hillary Clinton still has a chance of winning the presidency.

Mind you, it's a very, very slim chance -- but still a chance.

This conversation is still going around because Donald Trump won the election with the electoral college, but lost the popular vote.

Many Americans are not happy with how things are going.

At the moment, she's beating him in the popular vote by 1.7 million as votes are still being counted (mostly from California). That lead is expected to grow.

There are two crazy factors she would need in order to flip the election.

It would involve an electoral college mutiny and a recount.

Clinton lost the electoral college, thanks to close calls in Wisconsin, Michigan and Pennsylvania.

Wisconsin and Pennsylvania's electoral college votes are currently going for Trump. Michigan's are currently not going anywhere as the race there is too close to call.

Six members of the electoral college have agreed to not vote for Trump.

Although electoral college members are supposed to vote for the candidate their state population voted for, not all states have laws requiring them to do so.

So these six folks have decided they will not vote for Trump.

The electoral college is crazy, but this is actually kind of exactly why it was created. Alexander Hamilton wrote it's meant to make sure "the office of President will never fall to the lot of any man who is not in an eminent degree endowed with the requisite qualifications."

A man like, you know, a reality TV star with no political experience.

(Like most things in America, this seemingly well-intentioned idea was later co-opted by racism.)

People have been calling politicians' offices like crazy begging them not to give electoral votes for Trump.

But those six "faithless electors," as they're called, couldn't flip the election on their own.

This is where a recount comes in.

Experts are apparently telling the Clinton camp to demand a recount in Pennsylvania, Wisconsin and Michigan.

They think they've found evidence of manipulated or hacked results in those key states, according to New York magazine.

So their analysis is based just on this data, not any proof of hacking or manipulation.

Mind you, this is not at all foolproof analysis. Other experts are already saying it makes sense she'd do worse in electronic-voting counties, which are ones that wouldn't demographically vote for her anyways.

The Clinton campaign would have to challenge this election within the next few weeks.

Should Clinton get one or more of those states flipped and get some rogue electoral college voters, she could win.

I mean, let's be real, this is probably not going to happen.

But in a bizarre campaign year, I don't even know anymore. No rules! Anything is possible! Keep dreaming!