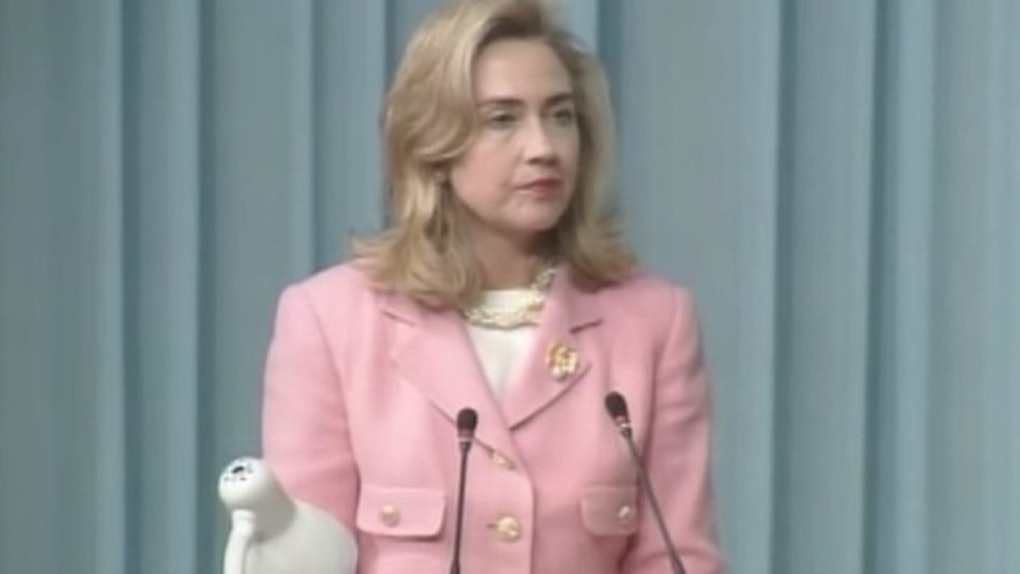 Remember That Time Hillary Clinton Was A Super Revolutionary Woman?

It's easy to forget that Hillary Clinton is a pretty revolutionary woman.

Back in 1969, for instance, she graduated from Wellesley College and was chosen by her classmates to be the first student commencement speaker. Republican Senator Edward Brooke spoke first and dissuaded the graduates from protesting against the Vietnam War.

When Clinton got up to the mic, she went off-script, saying,

We're not in the positions yet of leadership and power, but we do have that indispensable task of criticizing and constructive protest and I find myself reacting just briefly to some of the things that Senator Brooke said... Part of the problem with empathy with professed goals is that empathy doesn't do us anything. We've had lots of empathy; we've had lots of sympathy, but we feel that for too long our leaders have used politics as the art of making what appears to be impossible, possible.

Clinton kept up this spirit for decades. She became the first female chair of the board of the Legal Services Corporation, a non-profit that provides legal assistance to the poor, in the 1970s. She was the first woman to make full partner at Rose Law Firm.

When Bill Clinton was elected president, Hillary became the first first lady to have had a full-time career outside of her husband's political career before he became president.

When Hillary was elected in 2000, she became the first female senator of New York and the first and only first lady to seek and win an elected public office position.

In addition to walking the walk of female leadership, Clinton talks the talk. Back in 1995, when she was first lady, she gave a major speech at the United Nation's Fourth World Conference on Women in Beijing, China.

There, wearing a pink suit, she made her famous proclamation, which is being used in her campaign this year:

Clinton was encouraged to be nice in the speech, but she stood up against rights violations committed within China itself.

She called specific offenses, such as dowry deaths, rape, domestic violence, restricted family planning and genital mutilation, violations of human rights. She refused to have them set aside as anything less important than that.

After the applause died down following her proclamation of women's rights as human rights, she said:

Among those rights are the right to speak freely and the right to be heard. Women must enjoy the rights to participate fully in the social and political lives of their countries if we want freedom and democracy to thrive and endure.

Clinton fought for every woman to have the ability to lead her own life free from discrimination, threats and violence.

As long as discrimination and inequities remain so commonplace everywhere in the world, as long as girls and women are valued less, fed less, fed last, overworked, underpaid, not schooled, subjected to violence in and outside their homes, the potential of the human family to create a peaceful, prosperous world will not be realized.

This was a huge moment for women's rights, with Clinton's forceful recognition ringing across the globe.

Should Clinton become the Democratic presidential nominee, which she is on-track to be after Tuesday (sorry, everyone), she would become the first female nominee for a major party.

For a woman with the potential to break major gender barriers, it's comforting to know, historically, she's pushed for the rights, equality and empowerment of women.