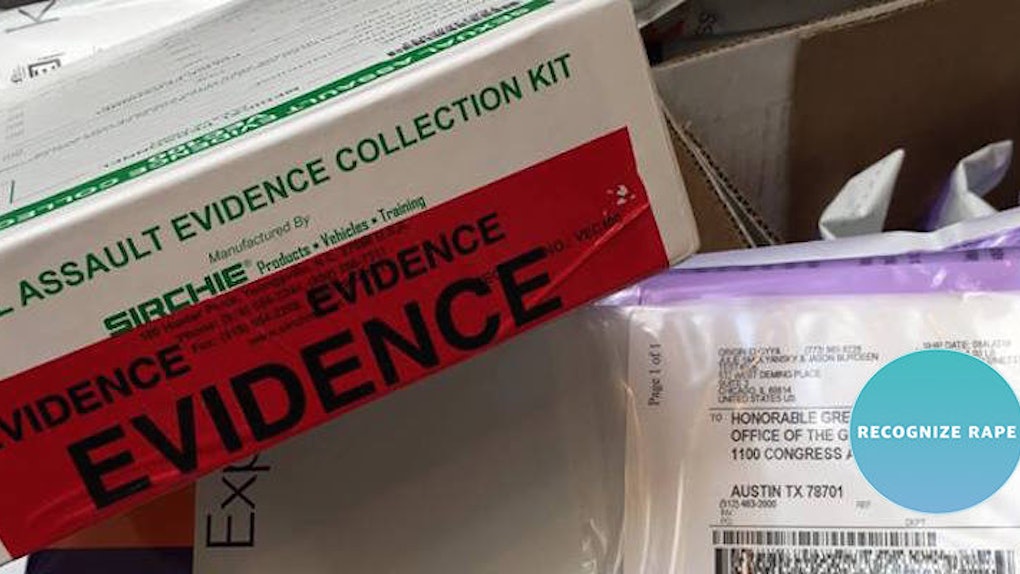 US Governors Receive Rape Kits In Mail From TEST400k

The rape kits started appearing in governors' offices in August.

They were sent as part of the “Just Track It” campaign by TEST400k, an organization dedicated to getting the estimated 400,000 untested rape kits in America tested.

Kits are performed by health care providers and SANE nurses within 72 hours after a person is sexually assaulted. Getting the kit done can take up to seven hours.

These kits collect evidence, including signs of an assault and DNA samples. When kits are tested, they can save millions of dollars for communities and prevent serial attackers from finding another victim.

But a devastating amount of kits sit untested in storage – sometimes for decades – creating a massive backlog. Survivors often are not told about the status of their kit, which could be untested or destroyed.

A new federal act called the Sexual Assault Survivors' Rights Act is trying to change that.

With relatively simple changes to the testing process, the organization believes, the backlog can be lessened.

One of these changes is using updated testing technology. In California, for instance, new technology allows kits to be processed within 20 days. It used to take six months.

Julie Smolyansky, co-founder of TEST400k and CEO of Lifeway Foods, told Elite Daily that in Louisiana, kits are now tested within 30 days due to a change in the workflow process.

Some states have instituted laws requiring police to send kits to labs within a certain amount of days, which lessens the amount of kits left in police storage.

TEST400k sent rape kits to governors with one simple concept in mind.

The organization was thinking about tracking.

You know how when you order something online, you can track exactly where it is?

That's exactly what they want to do with rape kits.

It raises a serious question about why we have not taken modern technology and these advancements to the next level when it comes to rapes and sexual assault.

So they mailed kits to governors – and tracked the status of the kits through the mailing process just to prove the simplicity of the concept.

Co-founder Jason Burdeen said in a statement when the initiative launched,

Our mission with 'Just Track It' is to bring awareness to politicians and the public about the enormous backlog of untested rape kits and how technology, such as an online tracking system, can streamline the testing process, establish accountability and make all of our communities safer.

The feedback from governors was mixed.

The packages from TEST400k included a request for governors to endorse a TEST400k National Call to Action. It called for three things:

Some, like Washington State Governor Jay Inslee, were immediately on board with the idea.

Washington state had already decided to create a tracking system for rape kits, leading the country in that innovation.

Other governors, like Phil Bryant of Mississippi, endorsed the call to action while acknowledging there's room for improvement on testing in their states.

While several governors heartily agreed to the pledge, many others did not.

The first was a simple agreement, like from Washington state. The second were governors, like John Hickenlooper of Colorado, who declined to endorse the pledge, but said they supported the mission.

At most, ten governors signed TEST400k's pledge in some way, Benos said.

And then there were the governors who said they wouldn't sign the pledge because they have no control over rape kit testing. In some states, governors do not have much reach over the crime lab budget.

But Benos said this demonstrated that some governors "don't see the power of their voice behind a pledge."

She mentioned that politicians who don't have budget control have still called for drug testing of addicts and welfare recipients.

TEST400k was troubled by that realization, but they plan to move forward. Benos said,

It showed us how much work we have to do. It is unacceptable that rape appears to be a second-class crime.

Testing of rape kits is all about the prioritization (and lack thereof) of survivors' justice.

It's very telling that when you have that tool... that actually is proven to identify predatory rapists, and it's not being used – there's nothing abstract about that. It's in your face. It's saying that these women have been raped, this is a tool that can prevent it, and you are not placing a priority on it.

TEST400k has not been deterred from its work, especially given the incoming national administration of Donald Trump, who has been accused of assault by about a dozen women.

We saw how society responded to sexual assault this year. More than ever, we owe survivors our commitment to making needed changes wherever and whenever we can.

There's definitely leaders across the country really doing incredible work, and that has been really a true benefit to add to the momentum of common sense and humanity that drives this movement.