On Thursday, Senate Republicans voted against a measure that would keep guns and explosives out of the hands of individuals on the FBI's consolidated terrorist watch list.

Republicans also voted against another measure that would expand background checks to gun shows and online firearms sales and increase the sharing of information between states and the national background check system.

If you need proof that Congress is a hostage to the gun lobby, look no further than today’s vote.

Indeed, it appears the GOP cares more about gun rights than the safety of Americans.

This all occurred just one day after at least 14 people were killed and 21 more wounded in San Bernardino, California -- one of the deadliest mass shootings in the past several years.

On Friday afternoon, the FBI announced the shooting will be investigated as an act of terrorism. We also know the shooters used legally obtained weapons and there's evidence at least one of the alleged perpetrators pledged allegiance to ISIS.

Moreover, even before the FBI's announcement, this incident was characterized as "terrorism" by some of the same people who voted against the terrorist watch list measure. This includes Republican presidential candidate Senator Ted Cruz, who said after the shooting,

Our prayers are with the families of those who were murdered and those who were shot. And all of us are deeply concerned that this is yet another manifestation of terrorism, radical Islamic terrorism here at home. This horrific murder underscores that we are in a time of war.

If we're at "war," as Cruz says, it appears he doesn't care if the people suspected of being the enemy are able to obtain arms.

Republican Senate Majority Whip John Cornyn claims his party opposes such measures because of the notion of "due process," in the sense people shouldn't be denied their constitutional rights simply because they've been placed on a list by the government.

But this standpoint is inconsistent. People on the federal terrorist watch list aren't even allowed to fly on planes, but it seems the GOP is fine with them owning dangerous weapons like those used in recent mass shootings.

They talk tough on terrorism, contending we must do everything we can to thwart future attacks, but apparently this doesn't include keeping firearms away from those who might commit terror attacks.

Between 2004 and 2014, FBI data shows more than 2,000 people on the terrorist watch list bought a handgun, sports rifle or assault weapon.

What's more, it seems terrorist organizations are aware of what's been called the "terror gap" and how easy it is for essentially anyone in this country to purchase guns.

America is absolutely awash with easily obtainable firearms. You can go down to a gun show at the local convention center and come away with a fully automatic assault rifle, without a background check, and most likely without having to show an identification card. So what are you waiting for?

Senate Republicans also voted to defund Planned Parenthood on Thursday, less than a week after one if its clinics was attacked in Colorado Springs.

The GOP claims be pro-life, but it's far more pro-gun. As the New York Times editorial board puts it,

[Republicans] are more worried about the possibility that someone might be turned away from a gun shop than shielding the public against violent criminals.

Calling for common sense gun reform does not mean repealing the Second Amendment or confiscating all guns or punishing responsible gun owners for the violent actions of others. It's a matter of finding substantive ways to prevent future deaths from firearms.

The US has more guns per capita than any other country worldwide, and the highest homicide-by-firearm rate in the developed world.

To put this into perspective, America makes up around five percent of the world's population but possesses around 42 percent of all the world's privately owned firearms.

Meanwhile, there are around 30,000 gun-related deaths in the US annually. Around 10,000 are a consequence of gun violence and around 20,000 are suicides.

Research shows where there are more guns, there is more death. They do not make us safer and Americans very rarely, if ever, use them in self-defense. 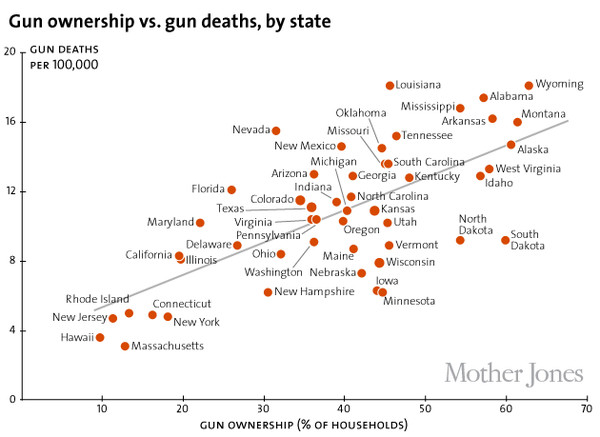 More gun control will not completely eradicate gun-related deaths, but inaction in the face of thousands of deaths every single year is counterintuitive, counterproductive and inexcusable.

More like this
Here’s What To Know About The Hijab Protests In Iran
By Annie Lin
Here It Comes: A National Abortion Ban May Be In The Works
By Rhyma Castillo
Harry Styles Wants To Give You Free Harryween Concert Tix If You Register To Vote
By Rhyma Castillo