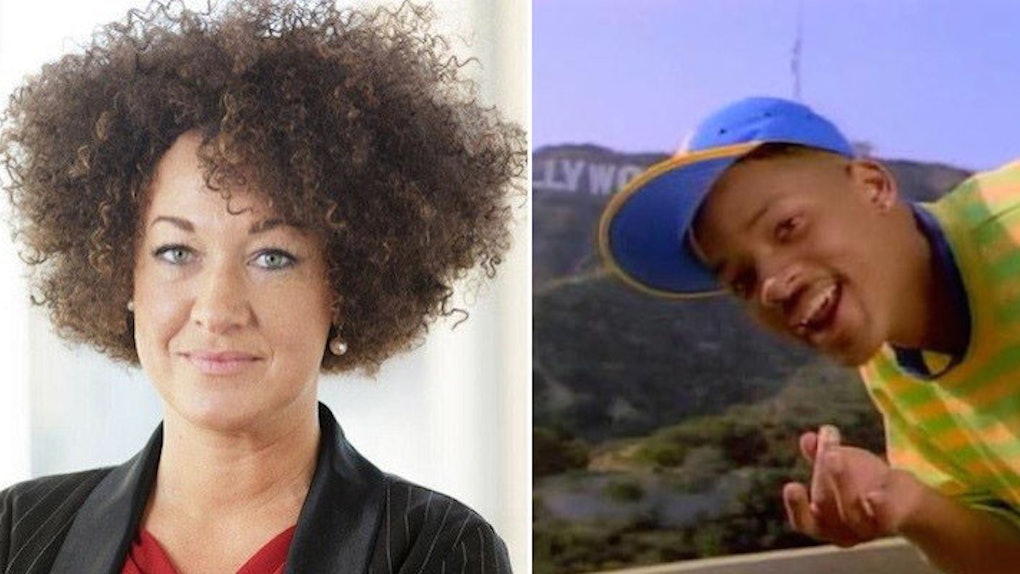 How 'Fresh Prince' Can Help Us Understand Rachel Dolezal And Race

The "Fresh Prince of Bel-Air" was a revolutionary show in so many ways. It not only made us laugh, it also taught us about the complexities of racial identity and illuminated the subtle but deeply ingrained nature of racial stereotypes in American society.

The premise was genius: Will, a young black male from the inner city, moves in with his aunt and uncle in one of the most affluent neighborhoods in America.

The contrast between them, in both outlook and demeanor, revealed so much about how we view race in America, a topic that is particularly pertinent in the complex conversation surrounding Rachel Dolezal (a subject we'll get into momentarily).

In particular, the disparity between Will and his cousin Carlton is what made the show such a success. Their dynamic was not only humorous, it was poignant and insightful at times.

This was especially evident during an episode from season four entitled "Blood is Thicker than Mud," which aired in 1993. At that point in the show, Will and Carlton were in college and attempting to get accepted into an all black fraternity.

In the end, Will is told by the fraternity president he's been accepted, but Carlton hasn't because they "don't need a brother like him."

Simply put, the fraternity president was contending Carlton didn't embody traditional notions of what it means to be black, ergo wasn't worthy of acceptance. He was implying Carlton was a "sellout" who'd adopted a white lifestyle.

When Carlton finds out, instead of getting upset, he states:

Being black isn't what I'm trying to be, it's what I am. I'm running the same race and jumping the same hurtles as you are. So why are you tripping me up? If you ask me, you're the real sellout.

The scene couldn't be more relevant this week as the controversial story surrounding Rachel Dolezal continues to provoke both puzzlement and anger.

Up until Monday, Dolezal was the president of the Spokane chapter of the National Association for the Advancement of Colored People. She resigned under controversial circumstances after being accused of lying about her race.

In the past, Dolezal has claimed to be black and the victim of hate crimes. But last week, her biological parents revealed she is white, providing a birth certificate to back it up.

Since that time, Dolezal has endured a hailstorm of criticism, which is what prompted her to step down from her position at the NAACP. She is also under a city ethics probe for identifying herself as African-American on an application to serve on the local police ombudsman commission.

The entire situation is rather unprecedented and difficult to comprehend.

On Tuesday, Dolezal told Matt Lauer she's almost always identified as black, ever since she was a child.

In this context, Carlton's line, "Being black isn't what I'm trying to be, it's what I am," comes to mind especially.

Carlton didn't have a choice about being black: Society would view him that way regardless of his demeanor, personality or preferences. This is the point he was trying to make to the fraternity president who suggested he wasn't black enough.

Comparatively, Dolezal has actively been "trying to be" black, or a notion of blackness she identifies with, deliberately changing her appearance and even lying on applications about her race.

What this all reveals is that race is a social construct, a human invention created and perpetuated by society. It's led to the enslavement, oppression, discrimination and disproportionate imprisonment of minorities.

We've made progress in regards to some of these issues, but we've still never been able to fully break down racial barriers. This is partially because, historically, it's served to benefit the majority. But it's also due to the fact many of us continue to assume roles associated with our designated races, often subconsciously.

Thus, racial identity is inherently convoluted, but none of this excuses Dolezal's actions.

Dolezal's self-perception, albeit relevant, does not validate the immense deception she committed, particularly as a leader within a historic and respected civil rights organization.

Identifying with black culture is not the same thing as being black, and it certainly doesn't mean you fully understand the struggles of minorities.

But as Jelani Cobb contends in a masterful piece for the New Yorker:

In truth, Dolezal has been dressed precisely as we all are, in a fictive garb of race whose determinations are as arbitrary as they are damaging. This doesn't mean that Dolezal wasn't lying about who she is. It means that she was lying about a lie. Dolezal was dishonest about an undertaking rooted in dishonesty, and no matter how absurd her fictional blackness may appear, it is worth recalling that the former lie is far more dangerous than the latter.

Race is the biggest lie of all, a complicated fact both the above scene from "Fresh Prince" and Rachel Dolezal help divulge.

The scene is over two decades old, yet still topical, which further proves we still have a long way to go in conversations surrounding race.

With that said, recognizing and understanding race as fraudulent is crucial in the continued effort to eradicate endemic racism, discrimination and oppression, both in America and around the world.

But in doing so, we can't forget the detrimental impact racial divisions have had throughout history, or we risk falling into the very same trap in the future.