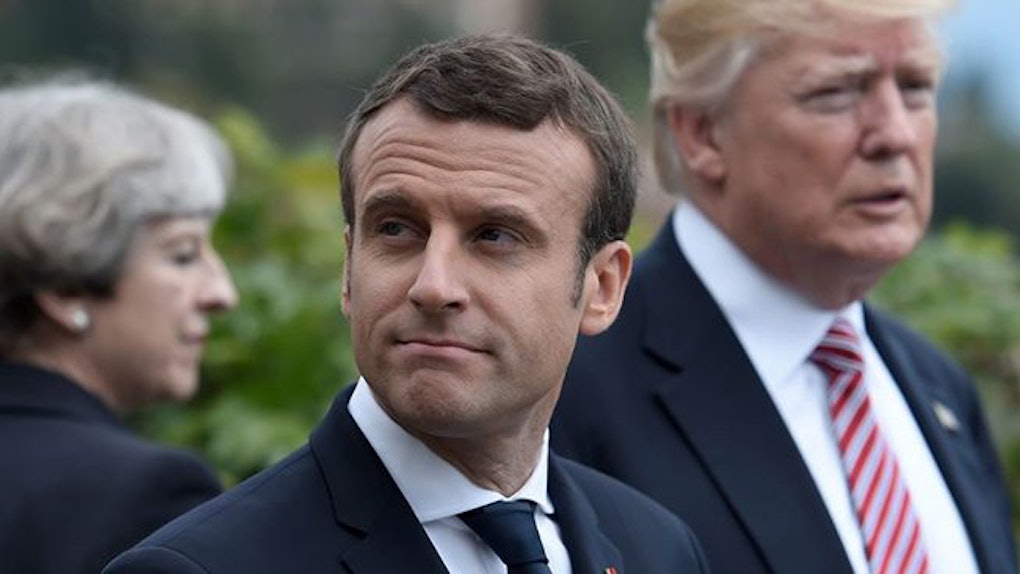 The Differences Between Macron and Trump

If you're an opponent of the U.S. withdrawal from the Paris climate agreement, then you're likely to have been more encouraged by the words of French President Emmanuel Macron than the President of the United States.

In a televised speech on Thursday night, delivered from the Palais de l'Élysée, the newly elected leader switched from French to English to deliver a parting message to Americans.

Wherever we live, whoever we are, we all share the same responsibility: Make our planet great again.

And then Macron tweeted out this:

It's not the first time the French president has made a gesture that directly contradicted the actions of President Donald Trump, and you can be sure it won't be the last.

That's because the two politicians are simply different, in ways both big and small. In case you weren't watching, here are a couple of moments over the past few months that made that fact obvious.

Their treatment of Vladimir Putin

From his presidential campaign to his tenure in the White House, Trump has continued an uncommonly friendly rhetoric towards a known U.S. adversary, Russian President Vladimir Putin.

Regardless of why Trump has done so (he's argued "getting along" is strategically advantageous for the United States), you can be sure about one thing: Macron does not share such a view.

One event that made that clear occurred on Monday, when Macron — while standing next to Putin — called the Moscow-based media outlets Russia Today (RT) and Sputnik "propaganda" arms of Putin.

Regardless of how accurate his characterization of the media organizations may be, the moment made the contrast between Macron and Trump's approaches to Putin pretty clear.

On one hand, Macron and Trump's marriages are actually similar. Both men have an age difference of about 25 years between them and their wives.

On the other hand, the way their marriages are viewed is different.

One finds its way into the conversation and the other does not. You can take your guess as to why, while Macron gives you his own opinion. He said "homophobia" and "misogyny" drive the questions.

Their relationships with Europe

Trump's "America first" mantra has disposed him to being tough on Europe and using aggressive rhetoric that led to public back-and-forths with leaders that are U.S. allies, such as German Chancellor Angela Merkel.

In contrast, Macron is one of several leaders who are now becoming the faces of NATO in place of a U.S. president who has been reluctant to fully embrace the alliance.

A brief -- perhaps innocuous -- moment during the president's trip to Brussels, in which Macron appears headed towards Trump, only to greet Merkel first, seemed to imply a lot about the two leaders' respective relationships with Europe.

Their relationships with Barack Obama

One spread a conspiracy theory that Obama wasn't born in the United States.

The other was endorsed by Obama.

Not much more needs to be said.

Their effects on different faiths

After France elected Macron in May, La Grande Mosquée de Paris released a statement that said,

The statement was a sign that Macron's election was a preferable outcome for the majority of the Muslim voting bloc in France.

In contrast, the election of Trump has prompted stories of Muslims increasingly fearing and doubting their place in the United States, with policies such as the travel ban on seven majority-Muslim countries doing little to assuage those fears.

Macron and Trump stand on different sides of the political spectrum. Trump may have flip-flopped from affiliating with the Democratic party over time, but he successfully ran his campaign through the conservative-leaning Republican party.

Macron, on the other hand, has had no problem labeling his agenda as "progressive" and "liberal," as the call with Obama shows.

Both politicians weren't politicians at all for most of their lives and entered public service via business backgrounds.

However, while Trump did win an election without ever serving in government, Macron does have experience serving within a presidential administration, as he was the deputy secretary general for former French President Françoise Hollande.

And then there's the most obvious point. Emmanuel Macron has yet to even enter his 40s -- and won't until December. Trump, on the other hand, will turn 71 in mid-June.

So yeah, it's not at all surprising that they're just a wee bit different.