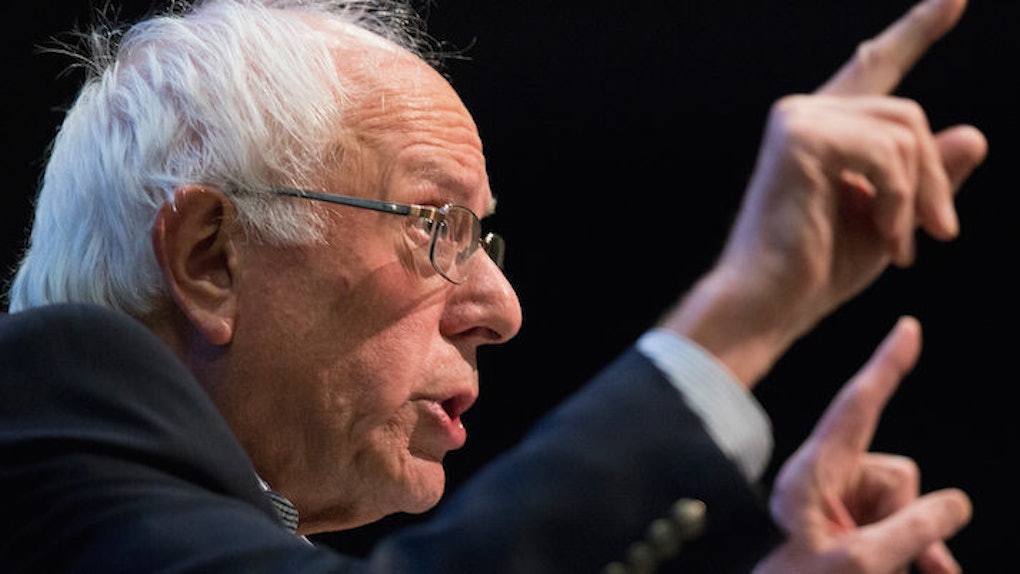 #FeelTheBern: You're Crazy If You Think Hillary Won That Debate

It was decidedly different than what we've seen in the Republican debates so far, given it was far saner in tone and there was generally less xenophobia, racism, homophobia and misogyny.

In other words, it was nice to hear a debate without Donald Trump, Ted Cruz and Mike Huckabee, among others.

There were some spectacular moments, such as Senator Bernie Sanders saying what we've all been thinking about Hillary's emails.

"The American people are sick and tired of hearing about your damn emails." Bernie with line of the night. — Nicholas Thompson (@nxthompson) October 14, 2015

Hillary also had some great one-liners and was very composed throughout.

"I can't think of anything more outsider than being the first woman president." -Hillary #DemDebate — Hillary Clinton (@HillaryClinton) October 14, 2015

But there were also some fairly awkward moments, or rather Lincoln Chafee's entire performance (poor guy).

"I'd like to finish my question... uh... my answer." - @LincolnChafee #DemDebate Worst public speaker since... pic.twitter.com/7dyPPMXqTO — Elite Daily (@EliteDaily) October 14, 2015

Hang in there, dude.

But who won the debate?

If you take much of the media's word for it, Hillary Clinton was the clear victor.

Even Donald Trump complimented Hillary and argued she won.

The debate last night proved that Hillary is running against the “B” team. She won't be so lucky when it comes to me! — Donald J. Trump (@realDonaldTrump) October 14, 2015

You can't deny Hillary had a solid night: She was poised and well-spoken. But she's getting way too much credit. It's ridiculous to say she had a decisive victory.

Let's be honest, while Hillary's performance was impressive, Bernie Sanders was the true winner of last night's debate. He was intelligent, articulate and assertive. But more than anything, he was consistent, a characteristic that's typified his political career.

Comparatively, Hillary, who was admittedly more authentic and less scripted than she usually is, still exhibited her greatest weakness during the debate: a propensity for flip-flopping.

Anderson Cooper, who did a fantastic job moderating the debate, called Clinton out for it in his first question, stating:

Secretary Clinton, I want to start with you. Plenty of politicians evolve on issues, but even some Democrats believe you change your positions based on political expediency. You were against same-sex marriage. Now you're for it. You defended President Obama's immigration policies. Now you say they're too harsh. You supported his trade deal dozens of times. You even called it the 'gold standard'. Now, suddenly, last week, you're against it. Will you say anything to get elected?

Even though Hillary defended herself against this assertion, she proved him right in many ways in terms of the flimsy stances she offered on various issues during the debate.

As FiveThirtyEight put it:

Clinton was far from perfect. She gave ambiguous or evasive answers on several questions, such as on marijuana legalization and health care benefits for children of immigrants who entered the country illegally. On other questions, she gave answers that might have played well to liberal Democrats but which might not be received as favorably by general election voters (such as saying she'd 'make the wealthy pay' for paid family leave and other welfare programs).

Hillary didn't win the first debate at all, she simply exceeded expectations by not being quite as underwhelming as she's been throughout her campaign thus far.

Perhaps people were just happy to finally see her put on the spot in public, given she's made a habit of evading journalists.

Those who think she won are confusing improvement and increased accessibility with an actual victory.

Bernie, on the other hand, was solid on essentially every issue other than guns (which, to her credit, Hillary rightfully challenged him on). He's been this way throughout his career -- Sanders doesn't care what's popular, he's more concerned with standing by his convictions. This quality, combined with his feisty personality, shined brightly last night.

When Hillary made an arguably off-color and unsettling comment about being proud of making "Iranians" her enemies, seemingly vilifying an entire people, Sanders named big pharma and Wall Street as his greatest rivals.

When asked about what America's "greatest threat" is, Hillary gave a generic answer about nuclear weapons, while Bernie kept it very real by noting the national security threat climate change poses (something the Pentagon agrees upon).

It is clear to me that Bernie has grown and also that he learned a lot from the #CampaignZero team regarding institutional racism #DemDebate — Shaun King (@ShaunKing) October 14, 2015

Additionally, Sanders said he'd support the legalization of recreational marijuana, making him the first and only candidate in the 2016 presidential race to do so.

He exhibited a great deal of common sense on this issue, stating:

And I would vote 'yes' because I am seeing in this country too many lives being destroyed for non-violent offenses. We have a criminal justice system that lets CEOs on Wall Street walk away, and yet we are imprisoning or giving jail sentences to young people who are smoking marijuana. I think we have to think through this war on drugs, which has done an enormous amount of damage. We need to rethink our criminal justice system, we've got a lot of work to do in that area.

Clinton, on the other hand, said she would not support the legalization of recreational marijuana, something a majority of Americans (especially Millennials) have expressed support for.

Are you ready to take a position on legalizing marijuana? Hillary Clinton: “No." — Matt Viser (@mviser) October 14, 2015

In a Facebook poll with millions of unique votes, over 75% of voters said they thought Bernie won the debate. Racism was the #1 issue. — Shaun King (@ShaunKing) October 14, 2015

This is a big sign America is waking up to how credible and impressive Bernie Sanders is.

Would Hillary Clinton make a good president? Absolutely. She's experienced, intelligent, strong-willed, rational and caring. But that doesn't mean she won the debate last night, nor does it mean she's a more sound candidate than Sanders.

The media needs to stop writing Bernie Sanders off as some crackpot socialist with no chance in hell of winning this race.

Sanders' rallies have brought in massive crowds, thousands upon thousands of people, outdoing other candidates. He's raised $26 million in small-dollar contributions from an astounding number of donors.

And, to top it all off, he won the first debate (and it looks like he raised $1.3 million as a result of his performance).

It's undeniable -- Bernie Sanders is an extremely viable candidate for president. Not only that, he has a legitimate chance of winning.

He's the real deal, and it's about time people start taking him seriously. They need to #FeelTheBern.