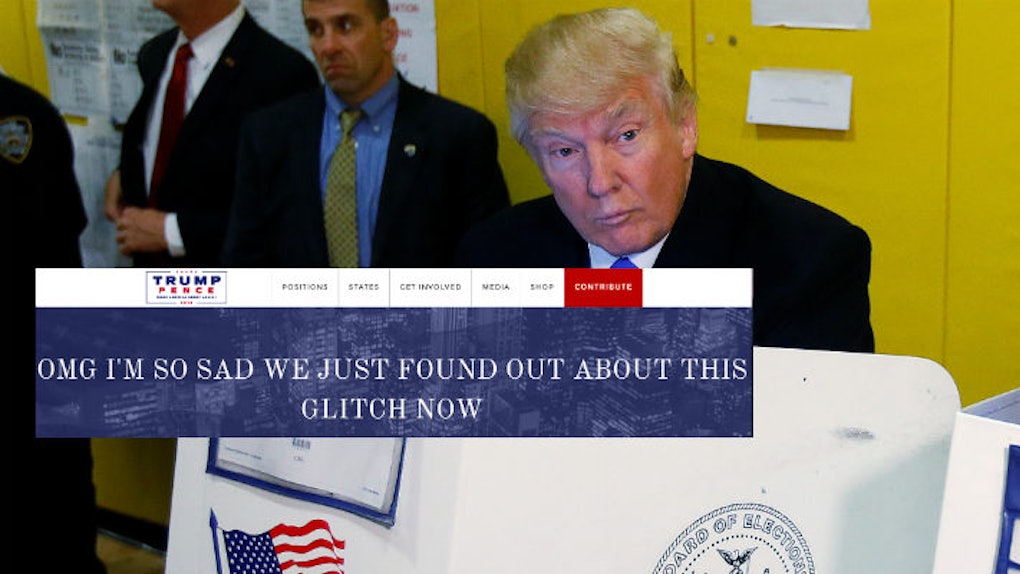 As it turns out, Donald Trump was right.

A part of the election was rigged.

But it didn't have anything to do with voting. The rigging going on Tuesday was all about a technical glitch in Trump's campaign website.

Hours before polls closed across the country on Election Day, people figured out that whoever made the Trump campaign site made one crucial error.

LMAO. Trump's official website has a glaring XSS vulnerability. You can write in any text to the header. pic.twitter.com/Ef6oRBKTYB — Izzy Galvez (@iglvzx) November 8, 2016

Namely, it was that you could literally type whatever you wanted into the header. Like, you could have gone ahead and written a poop emoji in the Trump website header...

Or, you know, expressed your political feelings in the Trump website header.

It was a simple edit. All you had to do was change the URL to whatever message you wanted to spread.

And oh boy, did people have fun with it. Once the secret of the glitch spread across social media, people went in on it.

Unfortunately, the Trump website glitch was only publicly recognized for a fleeting amount of time before someone apparently hopped in and plugged that coding gap (can you tell I have no idea how coding works?).

And so the fun was over, and the Trump website was back to having a boring, empty header section.

When this whole thing started, people were under the impression that Trump's website had been hacked. But it was the sweetest kind of hacking -- one that went to pure humor, not evil.

But then people realized it wasn't any sort of hacking at all. It was just yet another thing the Trump camp overlooked in running this ridiculous campaign.

This is the latest in a series of Election Day embarrassments for Trump, which included getting booed when he went to vote Tuesday morning in New York City.

With any luck, this entire campaign will actually for real be done come Wednesday morning. We'll see!!!

Citations: You Can Apparently Leave a Poop Emoji—Or Anything Else You Want—on Trump's Website 861 0 41 (Slate)