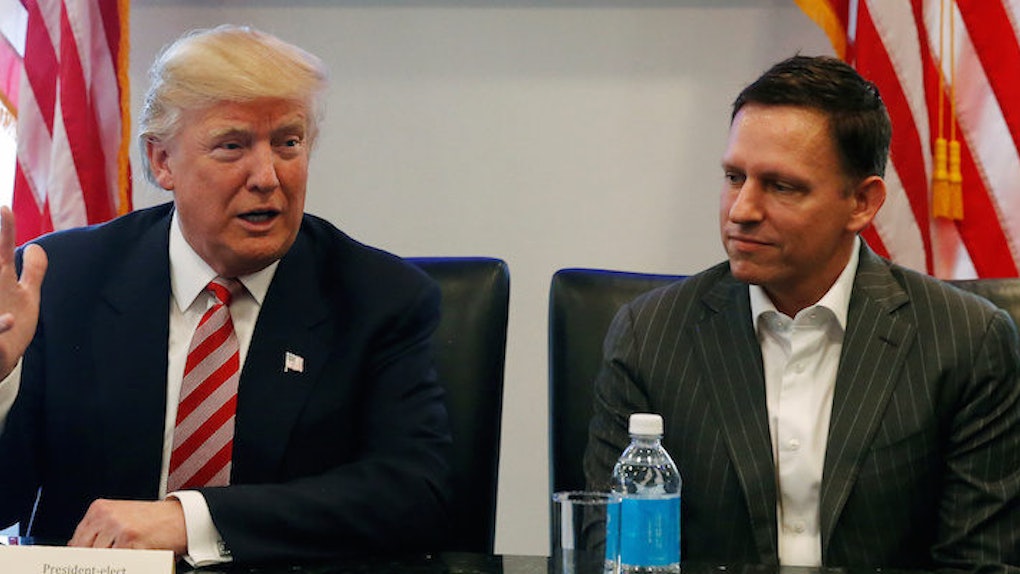 Trump Kicked Twitter Out Of Meeting Because Of Emojis

The leaders included Tim Cook of Apple, Jeff Bezos of Amazon, Sheryl Sandberg of Facebook and Elon Musk of Tesla. It was organized by Peter Thiel, known for petty vengeance and scientific vampirism.

But among the table of tech giants, (and Eric and Donald Jr., who are supposed to be running Trump companies in a blind trust completely unrelated to the presidency, and in no way involved with Trump's presidential work, such as meeting with tech giants to discuss policy issues) there was one notable person missing.

That person was CEO of Twitter, Jack Dorsey. Neither Dorsey, nor any other representative from Twitter, was invited to the Trump summit.

It seems a little strange to have a tech meeting without Twitter, no? This would be true for any organizer, but especially for Trump, who arguably won the presidency in large part thanks to Twitter.

Well, according to Politico, this all came down to a fight over an emoji.

The Trump campaign wanted Twitter to give them an emoji. Dorsey said absolutely not.

You know how when you type a big hashtag in a tweet, like #Olympics, a cute little emoji symbol shows up next to it?

That's what the Trump campaign wanted.

They wanted it on #CrookedHillary.

The Trump campaign wanted some visual representation of a person taking money to be added to the #CrookedHillary hashtag.

Gary Coby, director of digital advertising and fundraising for the Trump campaign, detailed the saga last month on Medium.

A source told Politico that Sean Spicer, spokesperson for the Republican National Committee, decided to not invite Dorsey, or any other Twitter representative, to the Trump tech summit.

It's not like everyone at the table was a big Trump supporter.

Apple withdrew its support of the Republican National Convention because of Trump, and Bezos said he would send the president-elect into space, Business Insider recalled.

Sandberg, meanwhile, was rumored to be in consideration for Hillary Clinton's cabinet back in the pre-11/8 days.

Sounds like a super-fun and not at all awkward meeting that I'm sure Jack Dorsey regrets not being invited to.