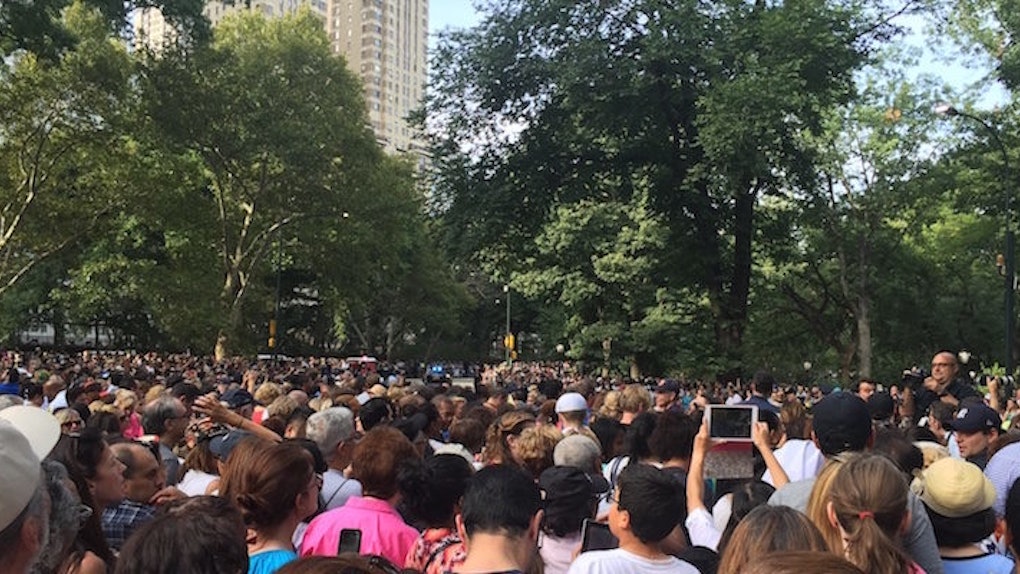 I'm A Conflicted Catholic, But I Went To See The Pope In Central Park

I lost my faith in the Catholic church in the middle of a confirmation class.

I was 14 years old and had spent the last few days trying to comfort a friend whose classmate had just committed suicide.

Sitting in a pew as a nun forcefully insisted that, per church doctrine, everyone who kills him or herself goes directly to Hell, I fought the urge to storm out.

That was what turned me off from the institution of the Catholic church. I’m far from the only Millennial to have had this “nope” moment with Catholicism, whether it was in confronting the church’s sex abuse scandals, patriarchal system or its stance on sexuality, marriage, divorce, birth control or abortion. There’s quite a bit to choose from.

Like many friends I’ve spoken to about this, I’m still religious. I’m #blessed to have a great relationship with a Greek Orthodox church, but you can absolutely be religious without a church. Faith wasn’t my problem, the strict Catholic institution was.

The number of Christians in America, particularly young Catholics and Protestants, has been declining, according to the Pew Research Center.

But Pope Francis may have the potential to change this trend. Since he took over the papacy in 2013, people have been speaking about his appeal to Millennials like me who grew up with conflicting views of the Catholic church.

Pope Francis is often referred to as “the people’s pope” as he speaks somewhat more inclusively on topics like homosexuality, climate change and economic inequality.

The pope slightly updated church rules on abortion and divorce. Yesterday, he met with victims of child sexual abuse and acknowledged some bishops have covered up abuse cases.

In this month's most recent New York Times/CBS News poll, 53 percent of people said the church is in touch with the needs of today’s Catholics, compared to 39 percent when Pope Benedict announced his resignation.

Pope Francis’s first US visit was to an American Catholic church in flux. Apart from his more stately visits to Congress, the United Nations and the 9/11 Memorial, people had the chance to personally see the pope in churches, schools and in a procession through Central Park.

With a pass from the Catholic Medical Mission Board, I attended the Central Park procession on Friday.

It was a long, hot day spent waiting on a massively crowded line to get into the park. Once inside, we packed in and continued standing, anxiously awaiting the pope’s drive-by.

A young woman stood on a stool and shouted to the crowd about what was happening on the road the popemobile was supposed to appear on because most of us couldn’t see behind rows of people holding up iPads. After several false alarms, she shouted:

We all cheered and held up our phones as the popemobile drove by. After hours of waiting, it all went down in under two minutes.

In the end, I didn’t even see the pope, just tips of the popemobile between gaps in the crowd.

What I saw instead was the hope and positivity the pope’s presence inspired in moments of levity.

I listened in as two young men spoke with an older woman about how Pope Francis was opening up the Catholic church for them by making it clear he’s not only interested in the specific prescriptions of the institution, but in goodness, community and at least some amount of faith.

Inside the park, 20 minutes before Pope Francis came, the crowd turned around and gasped in unison as we saw a rainbow over Columbus Circle.

While waiting, we fawned over an adorable 3-month-old baby whose mother hoped could be blessed by the pope.

Looking at the baby, all I could think about was the optimism the mother had for her future -- that her child would grow up into a welcoming world of opportunity and togetherness.

I was sure the mother would do anything to ensure that, and bringing the baby to the pope was part of her commitment and love.

I talked to my own mother, who is Catholic, after we left Central Park.

I know you have your problems with the church, but the pope’s not really about all that. He’s a symbol of hope for a lot of people.

Although I’m still not comfortable with certain institutional doctrines, in a vaguely biblical way, I can’t deny what I saw: a diverse group of people coming together amicably seeking hope for a brighter future for themselves and their loved ones.