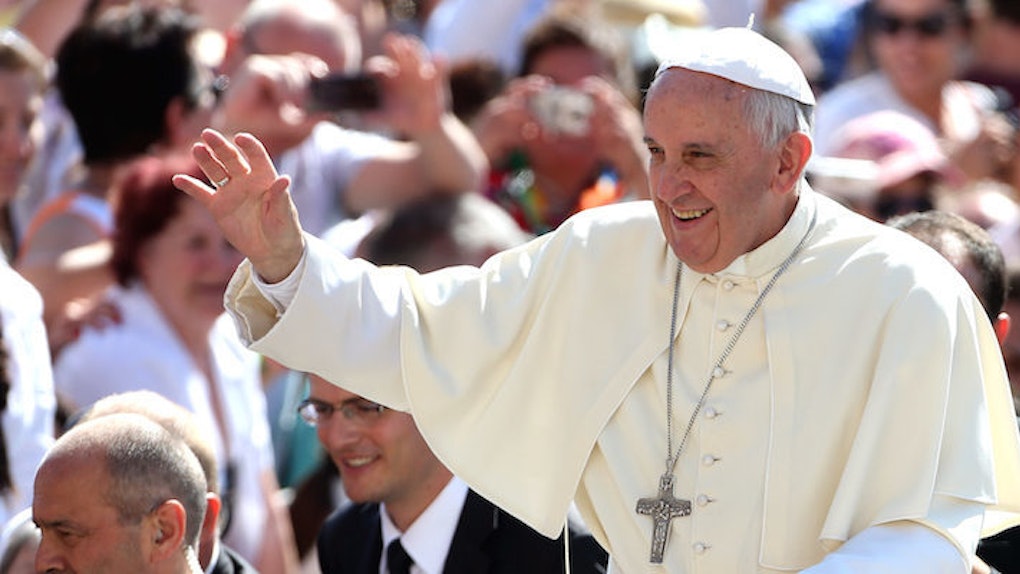 What Catholic Candidates Can Learn From Pope Francis

Jeb Bush, who converted to Catholicism 20 years ago, is reportedly excited about Pope Francis’s first visit to the US. As he stated in a CNN op-ed on Monday:

The church has grounded me and my beliefs in a deep way of thinking about mercy, penance and the dignity and potential of every life, young and old, rich and poor, born and not yet born.

Despite his current enthusiasm, Bush spoke against listening to the pope on certain issues in June:

I don’t get economic policy from my bishops or my cardinals or my pope… I think religion ought to be about making us better as people, less about things [that] end up getting into the political realm.

Regardless of the ostensible separation of church and state, the two are still intertwined. Politicians frequently use religion to support their causes and have selective hearing when their religion doesn’t line up with their political beliefs. Meanwhile, many voters are influenced by politicians’ religions, often leading to ugly discrimination.

Pope Francis’s US visit hits at an important point in the 2016 election.

There are six Catholic Republican presidential candidates, including Bush, Chris Christie and Marco Rubio. On the Democratic side, candidate Martin O’Malley is Catholic, as is Joe Biden -- though he hasn’t said whether or not he will run.

The pope spoke in a joint session of Congress this morning for the first time ever and touched on climate change, immigration and income inequality.

On specific American policies, the pope has spoken about the Iran nuclear deal and opening relations with Cuba. Pope Francis also has strong feelings on prisons and will be visiting one during his time in Philadelphia.

While the Catholic Church is traditionally fairly conservative, Pope Francis has been adopting more liberal perspectives, forcing some Republican politicians to confront conflicts with his stances.

Everyone agrees income inequality exists, but how do you address it?

The pope (and the International Monetary Fund) said trickle-down economics -- decreasing taxes for the wealthy to increase investment -- don't work. The pope has strong views against capitalism and believes working for profit is idolatry.

Bush, Rubio and Christie have all proposed tax plans that, though different in the details, analysts say ultimately benefit the wealthy.

On Friday, Pope Francis will visit a Catholic school in East Harlem and meet with immigrants -- including some who are undocumented -- to show his support for more inclusive immigration policies.

Bush and O’Malley agree with the pope and are supportive of paths to citizenship.

Other candidates are not quite as welcoming. Christie said he wants to track immigrants like FedEx packages to see what they’re doing and make sure they don’t overstay visas.

Rubio said he supports creating a path to citizenship, but a very slow one that wouldn’t take place within his theoretical presidency.

The pope issued an encyclical in June saying climate change is real and developed countries need to limit use of nonrenewable energy and help poorer countries create sustainable development.

This was the point on which Bush, who has questioned how much humans affect climate change, said the pope should not be commenting.

At the last GOP debate, Rubio basically said the opposite of what the pope called for:

We are not going to make America a harder place to create jobs in order to pursue policies that will do absolutely nothing, nothing to change our climate, to change our weather, because America is a lot of things, the greatest country in the world, absolutely. But America is not a planet.

Christie acknowledges the reality of climate change but said at the debate there's no need for major government intervention.

Everyone agrees on prison reform.

The one thing everyone can agree on is the criminal justice system needs reform. Pope Francis will be meeting with prisoners in a penitentiary in Philadelphia this weekend.

Similar to President Obama, the pope has commented “there but for the grace of God go I” regarding  prisoners while supporting the Catholic ideal of mercy.

The pope is clear on Cuba and the Iran nuclear deal.

Pope Francis came to the US after stopping in Cuba. The pope played a direct role in opening relations between the two countries last year.

Bush, Christie and Rubio have all firmly stated opening the relationship with Cuba is a bad idea. Christie addressed the pope’s role, saying:

I just think the pope was wrong... The fact is that his infallibility is on religious matters, not on political ones.

Rubio, whose parents were born in Cuba, wrote an op-ed in CNN last week on the subject of the pope’s visit to Cuba. Last month, he addressed Pope Francis’s help in opening the relationship, saying:

The pope has a different job than I do. … I do not believe it is in the national interest of the United States to have a one-sided agreement with an anti-American, communist tyranny 90 miles from our shores.

But how much do Pope Francis’s comments really matter?

Regardless of what Pope Francis actually says during this visit, the presidential candidates will hear what they want to hear and write everything else off as something the pope shouldn’t be commenting on as a religious figure.

It’s unlikely any of the candidates will change their stances based on the pope’s comments -- as much as we hope his visit moves Congress to do something about climate change.

At the end of the day, politicians are going to do what they’ve always done: Spin the situation in the way that works best for them.