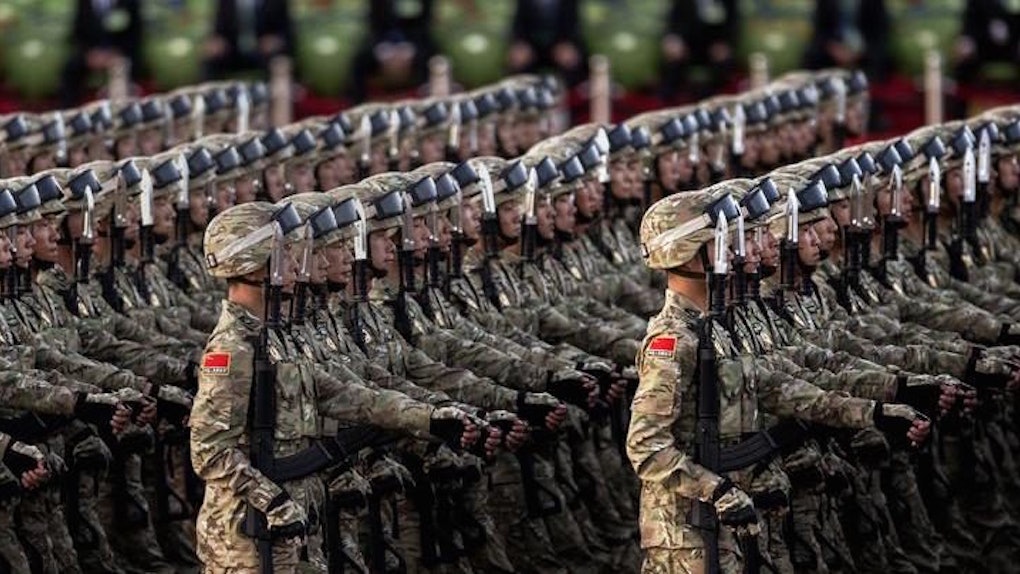 On Thursday morning, September 3, I awoke early and threw back the golden curtains of my dorm window to a big, beautiful, open sky of blue. Opening my window, I could hear in the distance the marching and shouting, “Yi, er, san, si!” from the required military training of all freshmen entering Tsinghua University’s campus.

I turned on classical music and cut up some fruit before sitting at my laptop. It was a beautiful day in Beijing.

September 3 also happened to be the day China showed off its military might to the rest of the world with an elaborate parade at Tiananmen Square, honoring the 70th Anniversary of Victory Day, or the end of the World War II.

Watching it live via my computer on CCTV, I found the parade to be an impressive spectacle by all accounts, with 12,000 synchronized Chinese troops marching, 200 military aircrafts flying overhead and tanks rolling down the street with anti-ballistic missiles.

In fact, an estimated 84 percent of the military hardware in the parade was being unveiled for the first time to both the Chinese public as well as the international community.

I'm sure this mental picture I'm painting makes many of my fellow United States citizens uneasy, which was also my initial reaction, in spite of all the joyous Chinese people surrounding me.

For the past couple of weeks, I have been analyzing my disquiet, recognizing there is much more to the Victory Day Parade than what meets the eye. First of all, it's important to recognize that if we are uncomfortable with China’s military display, it is not because we do not have a comparable or even superior military might.

Our military budget consists of over 20 percent of the entire United States federal budget at around $601 billion, in comparison to China’s estimate of $157 billion.

The United States is currently at war; China is not. In the United States, we do not have public demonstrations of our military prowess, proving a strong military does not have to advertise its capabilities to gain respect from the international community.

So, why then did China invest so much in a military parade? And what does it mean in the realm of international relations, especially with Chinese President Xi Jinping’s visit to the United States this week?

China is one of the oldest and most advanced empires in the world. It was the first civilization to print on paper, create paper money, invent gunpowder and develop the compass.

With a history spanning over thousands of years, China’s territory at its peak reached into modern-day Russia, Mongolia, Myanmar and India. China encompassed one-third of the world’s population, and it boasted the world’s largest economy.

I delve so far into ancient history in order to describe the crisis that China has found itself in modern history, following its interaction with the West. China was defeated by Britain in not one, but two Opium Wars (1839 to 1842 and 1856 to 1860), in which China was forced to give up Hong Kong.

China was forced to give up territories and influence, including Taiwan and Korea, to the Japanese in the Sino-Japanese War (1894 to 1895). China was defeated by a coalition of eight industrial powers, including Britain, the United States, Russia, France and Japan in the Boxer Rebellion (1899-1901). And finally, China was invaded by Japan in World War II, as Japan sought to expand its empire in continental Asia in the 1930s.

All of these defeats, within a mere 100 years of each other, contributed to an overall sense of “national humiliation” among the Chinese. This phrase, which has been adopted by government and civilians alike, alludes to the shame that such a great historical empire could be conquered and marginalized by so many foreign forces.

Out of all the foreign intrusions, that of Japan is the most present in China’s mind today. In fact, World War II is often referred to as the “War of Resistance Against Japanese Aggression” or the “World Anti-Fascist War.”

Filled with violence, this occupation lasted the longest by far; minor battles began in 1931, and the war lasted until 1945. According to President Xi Jinping’s Victory Day speech, there were an estimated 35 million Chinese civilian and military casualties in the war, accounting for one-third of all of the deaths in World War II.

Notably, China suffered the Rape of Nanjing at the hands of the Japanese, many Chinese women subjugated as “comfort women” or forced prostitutes to the Japanese troops. Poisonous gases were also used against Chinese.

While the atrocities of World War II are basically behind us in the West, in the East, they are still very present in the hearts and minds of citizens. One of the major differences between the war in the West (Germany-Austria) and the war in the East (Japan) is the lack of admission of guilt for the atrocities and a lack of compensation for victims.

Apologies from the Japanese have fallen short, particularly in the Chinese and Korean minds. In August, Japanese Prime Minister Shinzo Abe said his country would not apologize any further, as Japanese citizens should not continue to take responsibility for the actions that their country took before they were even born.

It might catch readers by surprise that the Chinese rhetoric about the parade was not that of military might or government authority. The official rhetoric was actually based on peace, achieving development and maintaining world order.

Before the parade began, President Xi Jinping made a speech in which he announced a 300,000 troop cut to the Chinese military (an estimated more than 10 percent reduction of its current size). In this speech, he attempted to define the Chinese national ambition to both his people (peaceful development) and to the world (by working within the pre-established international framework):

"In the interest of peace, we need to foster a keen sense of a global community of shared future. Prejudice, discrimination, hatred and war can only cause disaster and suffering, while mutual respect, equality, peaceful development and common prosperity represent the right path to take. All countries should jointly uphold the international order and system underpinned by the purposes and principles of the UN Charter, build a new type of international relations featuring win-win cooperation and advance the noble cause of global peace and development. "In the interest of peace, China will remain committed to peaceful development. We Chinese love peace. No matter how much stronger it may become, China will never seek hegemony or expansion. It will never inflict its past suffering on any other nation."

To visibly represent the theme of peace and international cooperation following World War II, China extended invitations to other nations not only to attend, but also to allow representatives of their militaries to participate in the parade, as well.

Auspiciously among those not in attendance was the North Korean President Kim Jong-un. It is worth noting the Western powers, including the United States, boycotted the parade. They sent their ambassadors or dignitaries to attend the event, instead of current heads of state or high government officials.

The parade itself incorporated over 1,000 individuals from foreign militaries, the first time China had ever given foreign troops such a distinction.

The releasing of 10,000 doves at the end of the parade was also a universal sign of peaceful goodwill. However, a sign that was equally important to the Chinese, yet generally overlooked by the West, was that the parade honored both People Liberation Army (PLA) veterans, as well as Kuomingtang (KMT) veterans of World War II.

Prior to Japanese invasion, these two groups had been at war for the political future of China, with the PLA under Mao Zedong and the KMT under Chiang Kai-Shek. Following the liberation of China from the Japanese, these two groups began battling once again in the Chinese Civil War, ending in 1949 with Mao Zedong gaining control of mainland China, and Chiang Kai-Shek retreating to the island of Taiwan.

To have veterans of both forces celebrated and honored in the parade was of great importance.

The Public Was Engaged

The Victory Day military parade was only open to about 40,000 elected invitees, a very small number compared to the 10 million-plus people who live in the capital city of Beijing. However, just because people could not physically attend the parade, it did not mean the celebration lacked public engagement.

In the weeks leading up to the parade, Beijing was transformed with billboards and signs that were set in nearly every possible place, heralding the upcoming Victory Day celebration. Its logo with the Great Wall and a dove was omnipresent in the vast city.

Chinese flags were flown everywhere that had a flagpole. Parks had manicured and colorful flower displays celebrating the event. A huge number of Chinese families photographed themselves in front of these arrangements, giving smiles and peace signs.

Although all of these initiatives were government-sponsored and not individually inspired, it definitely engaged the public. Now that the parade has passed, its highlights are played nonstop on metros and buses in between the normal, regularly scheduled clothing and iced coffee commercials.

Needless to say, the parade is still a constant source of conversation of public transportation goers, from old men to young girls. While this was an opportunity to show the world China’s capabilities and power, it has become increasingly obvious this parade was just as important, if not more so, for China’s national audience.

Talking to one of my Chinese classmates after the parade, she exclaimed to me:

"I cannot tell you how proud I am of my country and what we have accomplished. I have seen two military parades in my life, and each time, I am in awe."

Her sentiment has been echoed constantly over the past few weeks in Beijing.

There is no doubt China wanted to show off its military power and strength to the rest of the world when it dreamed up the 70th Anniversary Victory Day parade. China is a rising power, has the largest standing army in the world and is the world’s second largest military spender.

The desire to assert itself and demand its seat at the “grown-up” table is understandable of any country in China’s position. At the same time, we are doing ourselves a disservice if we simplify China’s motivations and objectives of this parade and define them by what meets our (Western) eye.

Yes, a military parade with missiles is a bit intimidating to us, but was the primary purpose to scare us Westerners? No, not by a long shot.

The parade was extremely complex and multifaceted, containing a deep historical narrative, a rhetoric of peace, the incorporation of (at least some members of) the international community and venues and initiatives to allow the Chinese public to participate.

It is yet to be seen how the Victory Day parade will play out in a geopolitical context, particularly in Sino-Japanese relations (already strained because of territorial island disputes). Surely, the Japanese will not view the flexed military muscle of China in a favorable light.

Over the past few months, Shinzo Abe has been talking about changing the Japanese Constitution to allow a partial rearmament. Will the Victory Day parade deter or accelerate Japan to do so? And how will the United States respond to Japan’s reaction?

Only time will tell the answers to these questions, but one thing is for sure: China’s Victory Day parade will have a significant impact on the upcoming dialogue of the region, and its echoes will be ringing through President Obama’s and President Xi Jinping’s meetings this week.