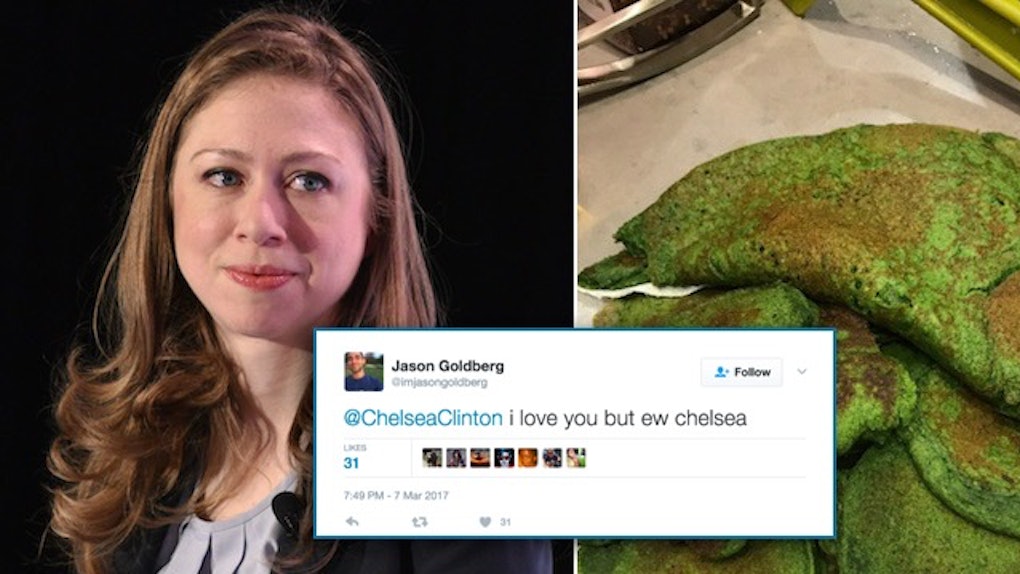 Chelsea Clinton loves a hefty stack of pancakes just as much as the rest of us do.

In fact, she loves 'em so darn much she decided to actively participate in National Pancake Day on Tuesday, March 7.

(If you forgot about the yummy holiday, I'm sorry. You certainly missed out.)

She didn't sizzle fluffy golden cakes and douse them in gooey syrup like a majority of the pancake-loving population did.

For the record, I get it. I'm all about the spinach life and I'm probably going to try this recipe when I get home. Don't judge me.

On the other hand, the rest of Twitter is pretty much insulted Chelsea would ruin a pancake by adding spinach to it, and they definitely weren't afraid to voice their opinions about the green treat.

"I love you but ew Chelsea."

People are drawing the line here.

"They should not look like they were cooked in a nuclear reactor."

Well, it looks like not too many folks are drooling over Chelsea's healthy spinach pancakes.

She doesn't seem to care, though. In fact, she tweeted the recipe for her green-lovin' followers to enjoy.

To concoct the fluffy spinach cakes, all Chelsea did was purée the spinach, blend it all up, add it to her regular pancake recipe with a little less mix and then, voila!

If you're one of the few people who actually find this meal the slightest bit appealing, try the recipe out for yourself. It'd surely be a cute green treat for St. Patrick's Day.

If you're completely repulsed by the idea, stick with the fluffy golden pancakes and avoid the greens at all cost.

Citations: Chelsea Clinton made spinach pancakes and people got pretty angry about it (Mic)