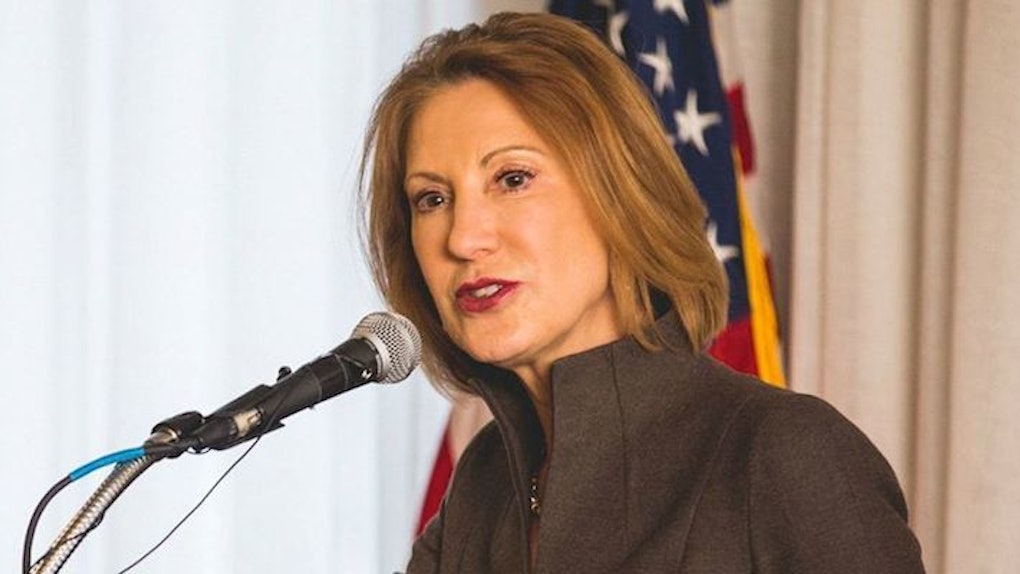 Why Carly Fiorina Misses The Mark On The Feminist Discussion

We are a year away from the 2016 general election for president of the United States of America and I can't say I'm excited.

The field of candidates is a giant stinking hot mess. Democrats and Republicans both are spending too much time criticizing one another, and not focusing on the issues at hand.

Debates are often out of control and the Republican party is a fractured and splinted group. They behave like petulant children, and the presidential race has become somewhat of a disgrace.

My political views are a mix of both sides, so as an educated voter, I'm looking for a candidate who speaks to me and my needs in the next four years.

What I'm given is not much to work with.

The biggest offender of all is Carly Fiorina.

I'm all for equality, and I'm all for women taking charge. Society has been a patriarchal one for quite some time and quite frankly, it hasn't worked out how we all had hoped.

Carly Fiorina is a much more sophisticated and well-versed candidate for the Republican ticket compared to past options (i.e. Sarah Palin and Michele Bachmann), but that's where the compliments end.

During the second debate (Honestly, why bother watching them live anymore when they get national coverage the next day and Twitter is always a great source of commentary?), Mrs. Fiorina stood up at the podium and argued why Planned Parenthood (services include: sexual health, birth control, cancer screenings, etc.), should have its funding revoked.

It's safe to say Fiorina would not be where she is today if it wasn't for the women's suffrage movement, the Civil Rights movement and the pioneers in women's equality, so it's a bit strange to think she's trying to cut off public aid to women.

She is denying the right of both men and women to get access to health services they might not be able to afford at general practitioners.

Furthermore, Fiorina's statement about how many women lost their jobs during Obama's first term to play up her "woman fighting for other women" turned out to be horribly false.

She is no better than the other politicians she is competing with by repeating incorrect rhetoric at her bully pulpit.

She blames her fumbles on the "liberal media," in order to take the heat off herself.

The most galling thing about Fiorina is that when Trump was getting into it with Megyn Kelly during the first debate, as a woman she didn't even come to Ms. Kelly's defense or bring up how misogynistic Trump was. She missed her opportunity to truly be a champion for women.

Continuously, her need to set herself apart from Clinton and put down her accomplishments are not surprising.

Instead of focusing solely on what makes her better than her female Democratic counterpart, she focuses on Clinton's flaws.

Yes, Hillary and Carly are on opposite ends of the political spectrum, but they should at least be able to come together for those they are undoubtedly representing: women.

Fiorina is in the news now because of her challenge to the women of "The View," over comments they made about her appearance.

While I do agree that catty commentary, especially of another woman has no business in a political arena, Fiorina herself does nothing of the sort to show she's better than the nonsense.

She wants to engage with people who troll her, and who insult her to prove she's better than them. That in and of itself is a problem with Fiorina.

Her need to prove she's deserving and that she should be taken seriously gets railroaded the second she opens her mouth and goes off about the liberal media and its agenda against conservative women.

If Fiorina was smart, she'd look at the Palin and Bachmann campaigns, truly understand where each of them went wrong, and correct her course for the remainder of the primary season.

That way, she can come out ahead of her male counterparts and show America that a woman -- especially a conservative one -- can serve as commander in chief.