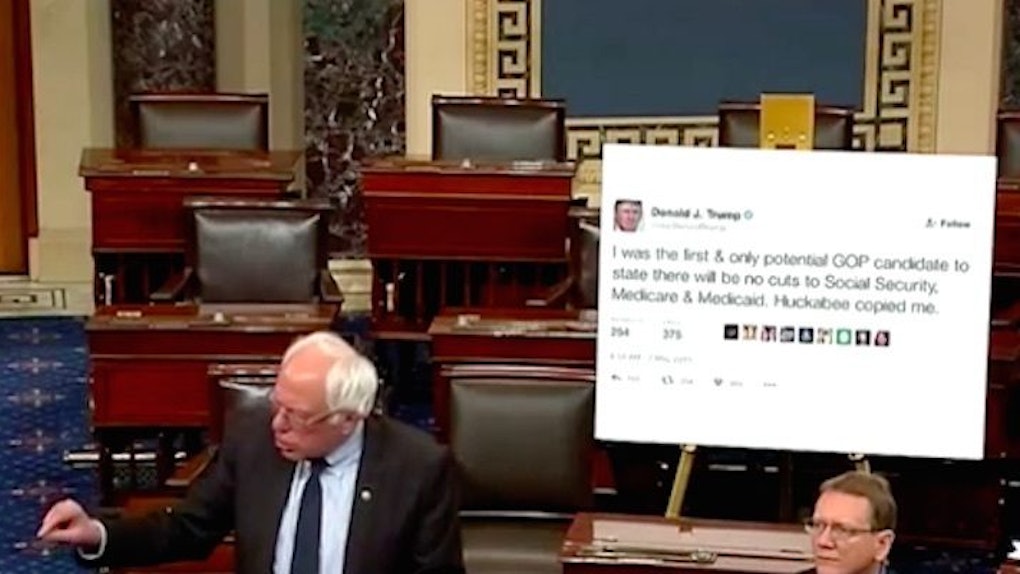 Bernie Sanders Calls Out Trump In Senate With Printed Tweet

Senator Bernie Sanders, who is the perfect mixture of grumpy and inspiring, printed out a giant Trump tweet and brought it to the Senate floor on Wednesday.

His deputy communications director Mike Casca tweeted a photo of Sanders and this abnormally large Trump tweet (so much tweeting).

Why did he do this? You ask.

For one, because he DGAF how ridiculous it looks. He cares about the welfare of the American people.

More specifically, the Senate is currently debating over repealing Obamacare, which Republicans have obsessively attempted to dismantle for years.

I was the first & only potential GOP candidate to state there will be no cuts to Social Security, Medicare & Medicaid. Huckabee copied me.

Bernie Sanders is demanding Trump stick to his word.

This is why he printed out the tweet from the former reality TV star, who is soon to be America's new president.

At a press conference that followed a meeting between Democratic congressional leadership and President Obama, Sanders stated,

Right now, before Congress wastes an enormous amount of time, Donald Trump has got to come forward ― maybe through a tweet, one of his tweets ― and say clearly that Donald Trump will veto any legislation that cuts Medicare, that cuts Medicaid or that cuts Social Security. And if he makes that clear to his Republican colleagues, we can save us all a whole lot of time and start getting to work doing what this country desperately needs to have done.

Sanders said if Trump fails to make a promise to veto any cuts to Medicare, Medicaid or Social Security, it would be evident the president-elect "simply lied to the elderly and the working people of this country and just made campaign promises that he had no intention of ever keeping.”

It seems the Vermont senator and former presidential candidate's New Year's resolution was to be a huge thorn in Trump's side.

Sanders did promise to be a "nightmare" for the president-elect shortly after Election Day, and it seems he's keeping his word.

This also seems to be even more proof all important political battles occur via Twitter.