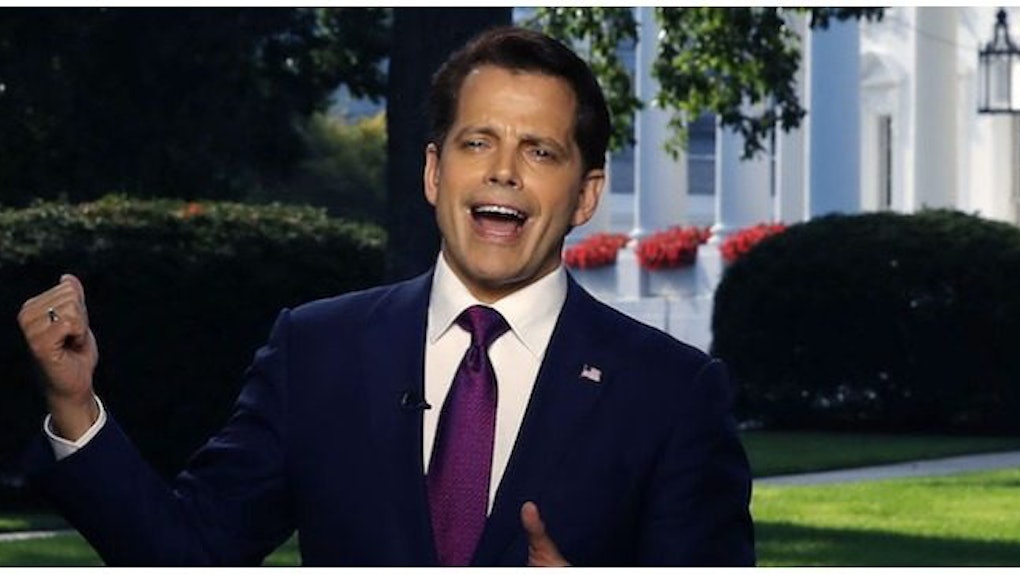 Tweets About The Scaramucci Post News Site Are Hilariously Skeptical

As if this timeline couldn't get any weirder, news broke earlier today, Sept. 27, that former White House Communications Director and foul-mouthed interview subject Anthony Scaramucci is the man behind new media venture Scaramucci Post. "What is that?" you may ask. "Who is that?" Oh, don't worry. These tweets about the Scaramucci Post will enlighten you in due time, my friend. In due time.

The Mooch is apparently launching a news website (I think???), according to a Twitter video posted to @ScaramucciPost on Sept. 27. And he seems to be capitalizing on his name recognition in order to get the ball rolling, hence the eponymous title of "Scaramucci Post." But the level of name recognition he actually has is another matter all together.

If you can't quite place the name, I don't blame you. Scaramucci's summer romance with the White House Communications Department began and ended quicker than a middle school relationship.

Basically: Scaramucci was hired on July 21 to take over as White House Communications Director -- which had been maintained by then-White House Press Secretary Sean Spicer after Mike Dubke vacated the post in May. The day Scaramucci was hired, he gave an, um, enthusiastic press conference, where he professed his love for the president, and it was all downhill from there.

His tenure had no shortage of controversy: he threatened mass firings, reportedly had a hand in the tweeted dismissal of former Chief of Staff Reince Priebus, threatened Priebus in a now-deleted tweet, and had an on-the-record conversation with the New Yorker's Ryan Lizza wherein he called Priebus a "paranoiac" -- among other accusations.

Unsurprisingly, he was gone from the White House by July 31, but not from our hearts.

That's a good question -- and one that hasn't quite been answered, despite today's announcement. While a Twitter account called @ScaramucciPost was created in August 2017, the person behind the account was anonymous. In fact, Scaramucci denied having anything to do with the account. Kind of.

But, it turns out that The Mooch himself is actually behind Scaramucci Post, which, despite supposedly being a news outlet, thus far has posted surveys asking who the account should follow and emojis. Lots of emojis. It kind of makes sense. I mean, communications, public relations, and news all feed off of each other.

Today, Sept. 27, he made an announcement -- complete with an understated yet graceless, wrinkled t-shirt advertising his venture -- finally explaining what we can expect. Kind of.

Mooch's announcement was met with confusion.

After all, it was a meandering statement full of mixed metaphors, and it lacked a coherent vision. What, exactly, will Scaramucci Post be? Well, that's a good question. From what I can gather, it's a news venture that will attempt to be more... nonpartisan in its reporting? I don't know. He mentioned being the center lane in a two lane highway, which isn't a thing, so take from that what you will.

Apparently. I mean, Scaramucci could just be pranking everyone, but that doesn't seem likely from the man who called a journalist and unloaded an on-the-record tirade that included the quip, "I'm not Steve Bannon, I'm not trying to suck my own c*ck."

When I first saw Scaramucci Post on Twitter, I thought it was a joke, a well-crafted spoof. I mean, when you have an account, connected by name to a former White House official, tweeting surveys about whether or not people think eggs are good for you, I think a little suspicion is warranted.

The Mooch's new media venture also holds contests for who they'll follow next.

OK, honestly, I wouldn't blame you if you're not excited about this like I am, because he lasted for a hot second and July is, like, years ago based on the breakneck speed of this timeline. But you, my friend, are not paying attention if you don't think mainstream media could use tons of emojis and an erratic media personality at the helm.