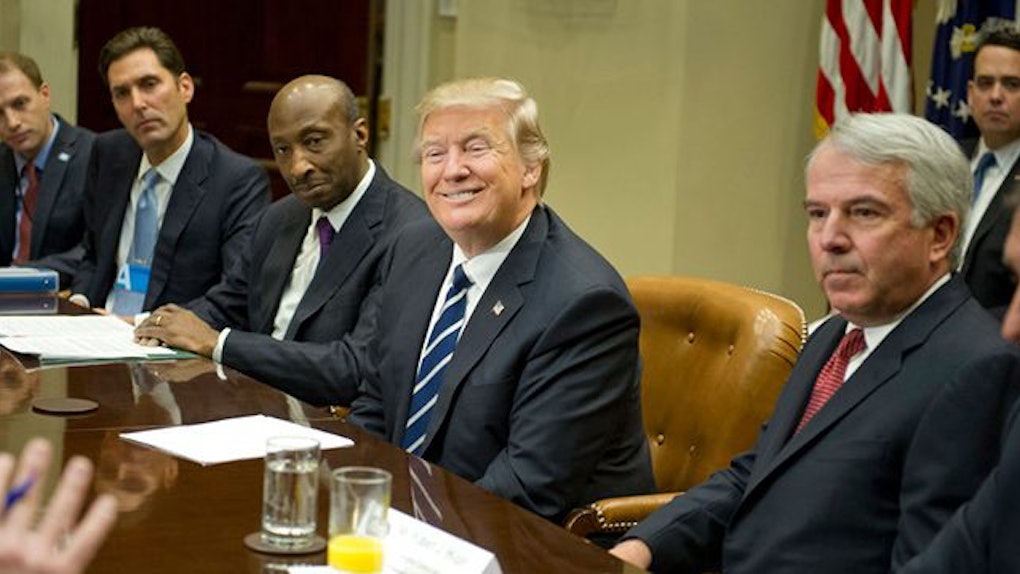 Since Donald Trump sparked a wave of negative press after avoiding a specific condemnation of white supremacy in the immediate aftermath of violent protests at Charlottesville, the president has seen three members resign from a panel business leaders he formed shortly after his inauguration. On Tuesday, Aug. 15, the number exits continues to grow as Scott Paul leaves Trump's American Manufacturing Council. Paul, the president of the Alliance for American Manufacturing, announced his decision on Twitter, where he wrote,

I'm resigning from the Manufacturing Jobs Initiative because it's the right thing for me to do.

For every CEO that drops out of the Manufacturing Council, I have many to take their place. Grandstanders should not have gone on. JOBS!

The trio of CEO's who resigned on Monday includes Under Armour CEO Kevin Plank, Intel CEO Brian Krzanich, and Merck CEO Kenneth Frazier - the only black executive on the panel, per Business Insider -- who was the first to resign after Trump's much-criticized response to the protests in Virginia.

The council was designed to advise Trump on creating more jobs in the manufacturing.

Paul -- who is a unique member in that he works for an advocacy group and not as chief executive of a company, did not offer any additional comment on his resignation, besides his tweet.

Krzanich, on the other hand, wrote a blog post explaining his decision to leave the council. The Intel CEO wrote,

Politics and political agendas have sidelined the important mission of rebuilding America's manufacturing base. I resigned to call attention to the serious harm our divided political climate is causing to critical issues, including the serious need to address the decline of American manufacturing.

So far, Trump's only response to the resignations have been criticisms of the departing members of the council. On Monday, the president issued a secondary response to the protests, during which Trump offered a specific condemnation of white supremacist groups.