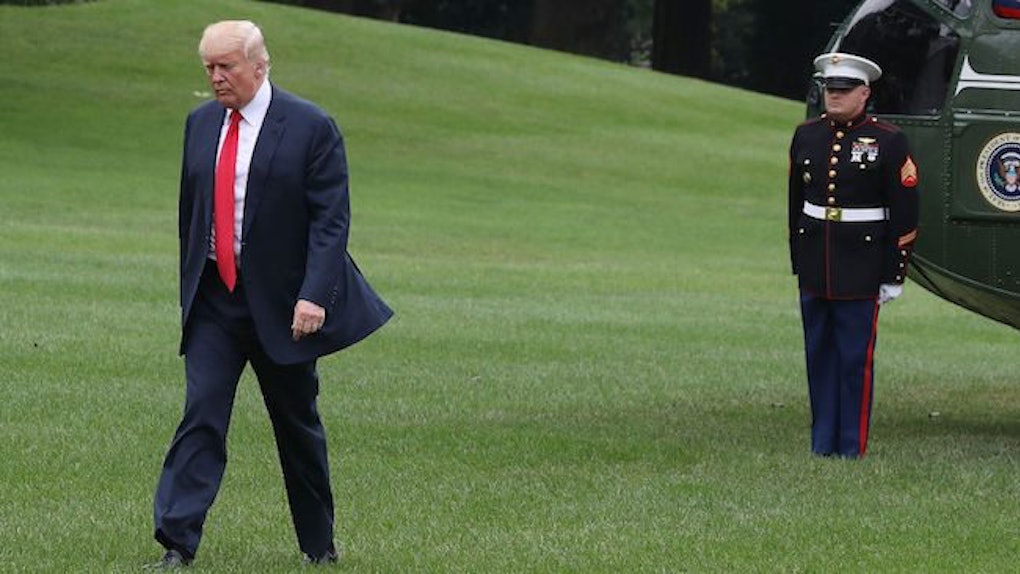 Tweets About Trump's Charlottesville "White Supremacist" Speech Show It Was Too Little, Too Late

On Monday, Aug. 14, President Donald Trump finally offered a forceful response to the awful events that transpired in Charlottesville, Virginia, on Aug. 11 and 12. While speaking from the White House, Trump said, “Racism is evil. And those who cause violence in its name are criminals and thugs, including the K.K.K., neo-Nazis, white supremacists and other hate groups that are repugnant to everything we hold dear as Americans.” Tweets about Trump's "white supremacists" Charlottesville speech show his response might be too little, too late. According to The New York Times, Trump's advisers pressured him to make these remarks after widespread criticism over his initial response to the events in Charlottesville, in which the president blamed "many sides" for the violence that ultimately led to one death.

After his initial remarks on Saturday, Aug. 12, people were furious with Trump over his apparent unwillingness to explicitly single out the hate groups that participated in the march in Charlottesville, including the Ku Klux Klan and neo-Nazis. Many felt Trump should've been far less vague in denouncing white supremacy. This helps explain why so many have taken to Twitter to express their lack of satisfaction with Trump's latest comments on Charlottesville.

Many on Twitter seem determined to let Trump know they won't forget his initial response to Charlottesville.

It also didn't help Trump began his remarks about Charlottesville by bragging about the economy.

Many are also calling for people in Trump's administration to resign or be fired over what happened in Charlottesville.

This is especially true in relation to White House Chief Strategist Steve Bannon, who ran the controversial publication Breitbart News before working for Trump. Bannon once referred to Breitbart as the "platform for the alt-right," which also happens to be the group that organized the march in Charlottesville. People feel individuals in Trump's administration, like Bannon, among others, have helped embolden white nationalists.

Trump's overall response to Charlottesville arguably reveals to us he's not a person we can truly count on to lead us at moments like this.

In failing to swiftly and firmly condemn white nationalists who proudly marched through the streets of a historic U.S. city, Trump emboldened these hateful individuals. The neo-Nazi publication The Daily Stormer actually praised Trump's initial reaction due to its lack of specificity: “Trump comments were good. He didn't attack us,” the publication said. “Nothing specific against us.”

So, here's the awful truth: We have a president who was endorsed by the KKK's official newspaper during his campaign and who drew applause from neo-Nazis less than a year into his tenure. Moving forward, it's incredibly hard to believe Trump will ever offer us the leadership we need at this point in our history. We have arguably reached a time where we will have to look to each other for guidance during times of tragedy and hardship instead of the individual who inhabits the White House, as we have in the past. Hopefully, the silver lining in all of this will be that Trump's apparent inability to lead strengthens the character and willpower of the American people.