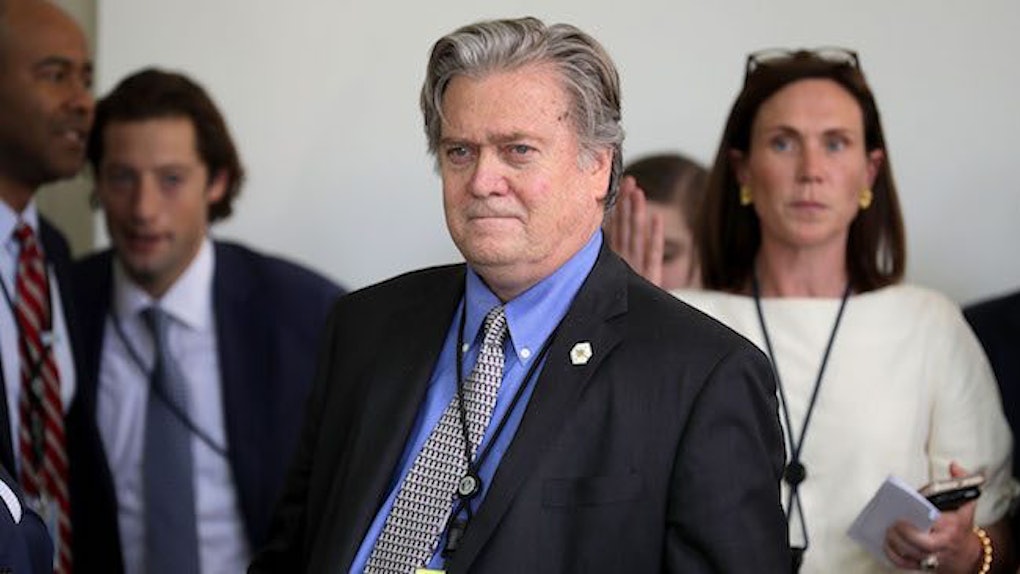 Barely 24 hours have passed since the violence at a white nationalist rallyin Charlottesville, Virginia ended with the tragic death of a 32-year-old woman. The nation is shocked and horrified, and all the more so because President Donald Trump refused to denounce white supremacy in his remarks on the violence. And now, as anger seethes, Twitter is demanding that White House chief strategist be dismissed, as Fire Steve Bannon tweets took over social media on Sunday afternoon.

Bannon, the former editor for right-wing website Breitbart, is a focal point at the White House for white supremacists, and is closely tied to the alt-right movement.

When Bannon was tapped as White House chief strategist shortly after the November 2016 election, he was praised by white nationalist leaders. Former Ku Klux Klan leader David Duke told CNN that Bannon was “basically creating the ideological aspects of where we're going.” He continued, “and ideology ultimately is the most important aspect of any government."

So, yeah. When Trump refused to denounce white nationalism after a rally in Charlottesville, VA left a woman dead, people thought of Bannon.

When Trump refused to condemn white nationalism in his remarks, it got worse. And by Sunday, people started calling for Bannon's dismissal on Twitter with the hashtag #FireBannon.

Bannon has repeatedly, consistently, and convincingly been accused of supporting white supremacy and racist ideologies.

At Breitbart, he oversaw the publication of stories attacking women, Muslims, and other groups, according to the Anti-Defamation League. He's rumored to be the driving force behind certain of Trump's more outrageous policy decisions, such as the Muslim ban. And he's been outright denounced by anti-hate group the Southern Poverty Law Center (SPLC).

In July, Bannon boasted that Breitbart News was 'the platform for the alt-right.' The alt-right, as we know, is simply a rebranding of white nationalism and is the energy behind the avalanche of racist and anti-Semitic harassment that plagued social media platforms for the entire presidential campaign. Once the news of Bannon's appointment hit white supremacist websites last night, forums like Stormfront erupted in celebration.

Miller is a nationalist hardliner who recently said that the poem on the Statue of Liberty (the one about those "huddled masses yearning to breathe free") was "added later." And Gorka, a former Breitbart employee, has been seen wearing Nazi-associated iconography and has said that white supremacy isn't a problem. So, appropriate.

But the real ire was reserved for Bannon.

Some pointed out that if the White House was really and truly against white supremacy, then the path was clear.

And the NAACP was just plain unequivocal about it.

Rumor has it that Bannon's days are numbered anyway, as new Chief of Staff John Kelly takes the reins in the White House. Sources told CNN that Bannon's agenda doesn't "mesh" with the current power structure in the administration, and he's seen as pursuing his own agenda.

If so, maybe the anger and fury that thousands of anti-white supremacy protesters are shouting will be the last straw. And wouldn't that just be a kick in the pants?