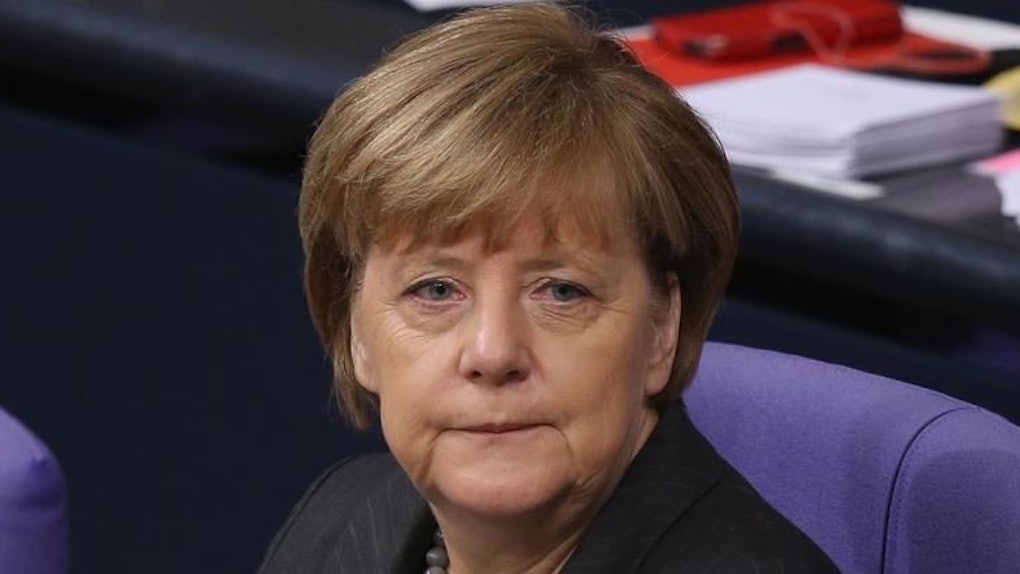 Chancellor of Germany Angela Merkel was named Time Magazine’s “Person of the Year” for 2015 on Wednesday.

In a week that’s seen Donald Trump say he would ban all Muslims from entering the United States, Time’s choice of the German leader is especially poignant.

Merkel is a strong, steady leader who has singly stood up to economic and humanitarian crises this year, despite political backlash. She is an excellent choice to represent 2015.

Merkel is Time’s first female “Person of the Year” in 29 years.

Ignoring the obvious problem Time has for not picking a solo woman in 29 years, Merkel is no stranger to being the first.

Merkel became German chancellor in 2005 -- becoming the country’s first female chancellor. She’s also Germany’s first chancellor to have grown up in East Germany. In 2000, she became the first female leader of her party.

She knows her science.

Merkel got a master of science, studying physics, and went on to get a doctorate in quantum chemistry.

While she was doing her undergrad, she worked as a barmaid at disco parties.

She spent the 80s working as a quantum chemist at the East German Academy of Sciences -- where, true to form, she was the only woman in the theoretical chemistry section.

Merkel seriously held sh*t down in 2015.

This year, Merkel had to contend with an economic crisis for the European Union, Russian attacks on Ukraine and the refugee crisis.

In each case, she served as the Western leader. She made strong statements and took important stances, becoming an example for her peers.

First, she stood up to Vladimir Putin.

While Russia was inching on Ukraine, grabbing at more and more land in Crimea, Merkel went to Russia.

At a news conference in May, Merkel said:

We have sought more and more cooperation in recent years… The criminal and illegal annexation of Crimea and the warfare in eastern Ukraine has led to a serious setback for this cooperation.

She didn’t back down to the Russian leader, voicing her stance on their actions loud and clear.

Then, she steered the European Union through an economic crisis.

Throughout the first half of the year, there were fears that the European Union would break apart as Greece faced deadlines they could not meet to pay debts.

Newly-appointed Greek Prime Minister Alexis Tsipras faced off with Merkel in the summer. There were threats of a “Grexit” -- Greece leaving the EU.

Merkel stood strong through it all, navigating the EU in negotiations for a bailout. Some said she was being too hard on Greece, essentially punishing the country, but eventually Greece was given a bailout approved by the German parliament, on strict terms.

At this point, even an economics major of Greek descent like myself has to admit Merkel’s hardline negotiations with Greece were necessary to keep the European Union intact and the Western economy stable.

Finally, she stood up in the midst of the refugee crisis.

This fall, when leaders from countries like Hungary were saying cowardly, xenophobic bullsh*t about refugees and taking measures to keep them out of their countries, Merkel stood up to them.

In October, she said:

It's not acceptable that we have free movement of goods and of people, but that some countries say 'This we can't do, and that we can't, and we can't take in Syrians because we're not ready yet.’

When someone says ‘This is not my Europe, I won't accept Muslims,' I have to say, this is not negotiable.

Merkel criticized her fellow European leaders for putting up walls and fences and trying to keep refugees out. She said refugees need help and it is their responsibility to be there.

Merkel said all this despite the political backlash she faced from people thinking extremists would come in with refugees and saying the influx would strain Germany.

Germany has registered 964,574 refugees, as of this Monday. To contrast, in September, President Barack Obama said America would accept 10,000 Syrian refugees over a year.

After the Paris attacks in November, Merkel faced renewed criticism for admitting so many refugees. She still held strong in her policy, saying:

We owe that not only to the victims but also to security in our countries and to the refugees, a large number of whom are fleeing terrorism.

Basically, Merkel is a committed badass who refuses to stand down.

Merkel has been a major player in several of the world’s crises this year and has consistently come out on the side of effectiveness and humanity.

Regardless of what you think of her policies, you can’t deny that she stands by them. She views issues calmly and addresses them with thought-out reason. It’s hard to reject the power of that.