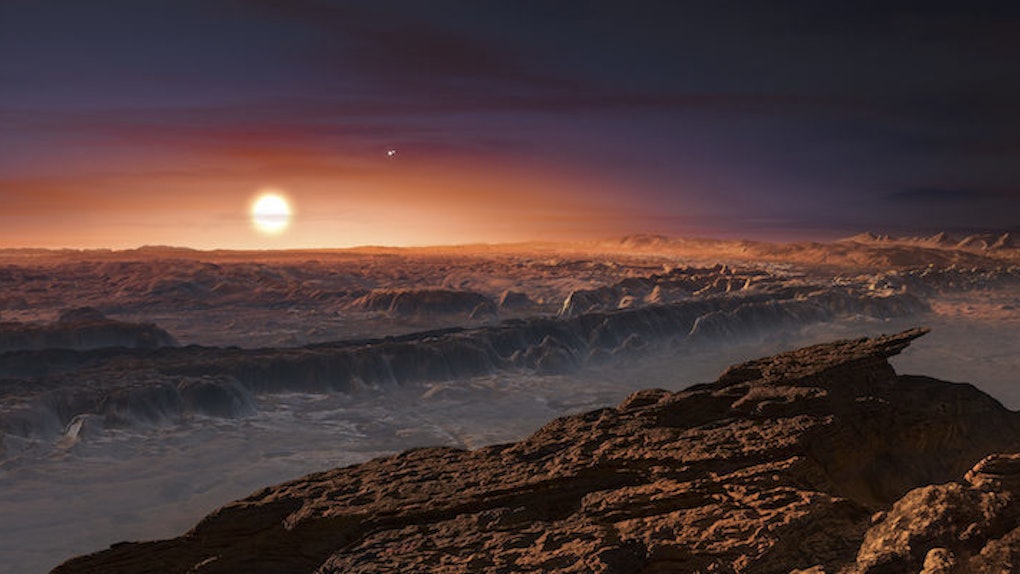 Pack your bags, people. There may be a new Earth-like planet not too far from our wretched world. Well, kind of, so maybe you shouldn't start packing just yet. Either way, this is good news.

Scientists may have discovered a planet just four light years away from Earth with similar qualities to our planet.

According to Mashable, a recent study published in the journal "Nature," conducted by a group of 31 scientists at the Queen Mary University of London, recaps the discovery of a new planet nicknamed "Promixa b."

The planet is located near the gleaming Proxima Centauri, the closest red dwarf star to our sun.

This graphic helps put the new planet into perspective.

In a statement regarding the findings, Dr. John Barnes at the university revealed,

If further research concludes that the conditions of its atmosphere are suitable to support life, this is arguably one of the most important scientific discoveries we will ever make.

Let's hope so... I mean, have you seen the way we've been treating our once beautiful planet? It might be time to relocate.

There's only one tiny problem -- where to?!

If this video doesn't get you pumped about the latest discovery within our universe, nothing will.

So, how exactly was this Earth-like planet discovered? Scientists used not one, but two telescopes at the European Southern Observatory to explore the Proxima Centauri before making the discovery.

If expert NASA astronomers are getting amped about "the exoplanet next door," we should all be pretty eager to find out if it can sustain life.

Despite the findings, scientists still have a long way to go before they figure out if we just hit the extraterrestrial jackpot or not.

I, myself, have a few important questions about this new exoplanet that I'd like answered first...

Can it support an abundance of Starbucks locations? Are there alien friends waiting for us there? And, of course, the most important question of them all -- is there wifi access?! Time will certainly tell.