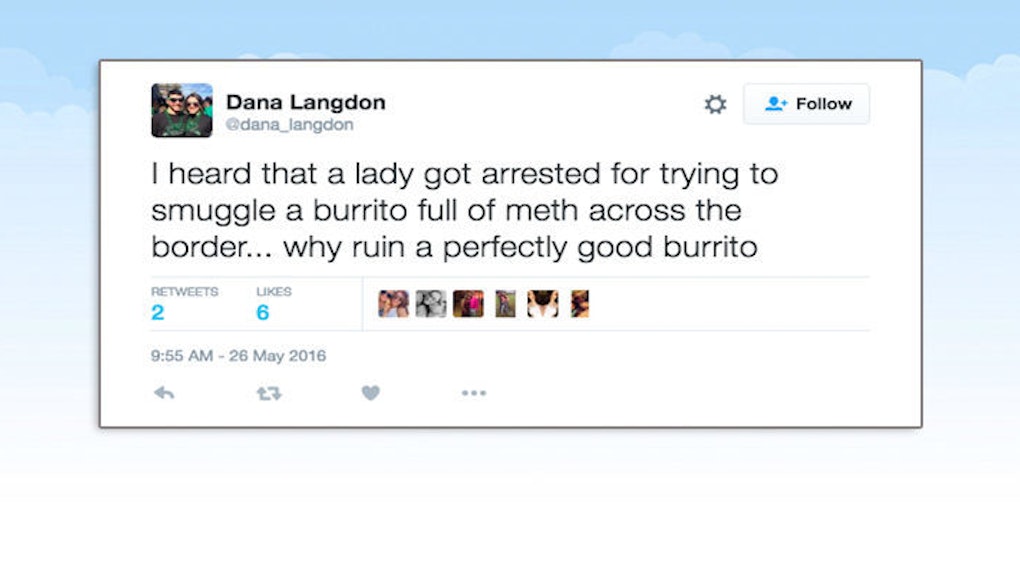 Everyone's Really Concerned About This Burrito Someone Used To Smuggle Meth

People are resorting to very desperate means to smuggle drugs across the US-Mexico border. Just a few weeks ago, for example, US Customs and Border Protection officials discovered around 1,400 pounds of marijuana stuffed in coconuts very close to the border in Texas.

Apparently, people got the word coconuts are not the way to go when it comes to drug smuggling and are now attempting to use burritos.

What is the world coming to?

According to The Daily Beast, federal agents caught a 23-year-old Susy Laborin along the US-Mexico border with a meth-filled burrito.

She was reportedly attempting to cross the border with a bag full of burritos when a drug-sniffing dog foiled her plan and helped a US Customs and Border Protection agent discover the methamphetamine-stuffed burrito.

Laborin ultimately confessed she knew about the meth and was paid $500 to act as a drug mule and bring it to someone in Tucson.

There was apparently more than a pound of meth in the burrito, worth around $3,000. It's probably safe to say this makes it the most expensive burrito in history, and as far as we know, it didn't even have extra guac.

This story feels like something straight out of "Breaking Bad," except for the fact Walter White wouldn't be dumb enough to use a burrito as a vehicle for smuggling drugs (sounds more like something Jesse Pinkman would do).

When it comes down to it, this is just a really big waste of what is typically a delicious and fulfilling meal.

It seems as though a lot of people are actually really offended by what happened to this burrito, which is quite understandable.

Someone could've eaten that burrito, but now, it's gone forever.

Hugs (and burritos), not drugs.

Show a little respect for carne asada next time.

Don't meth up this guy's burrito.

You don't f*ck with the art of burritos.