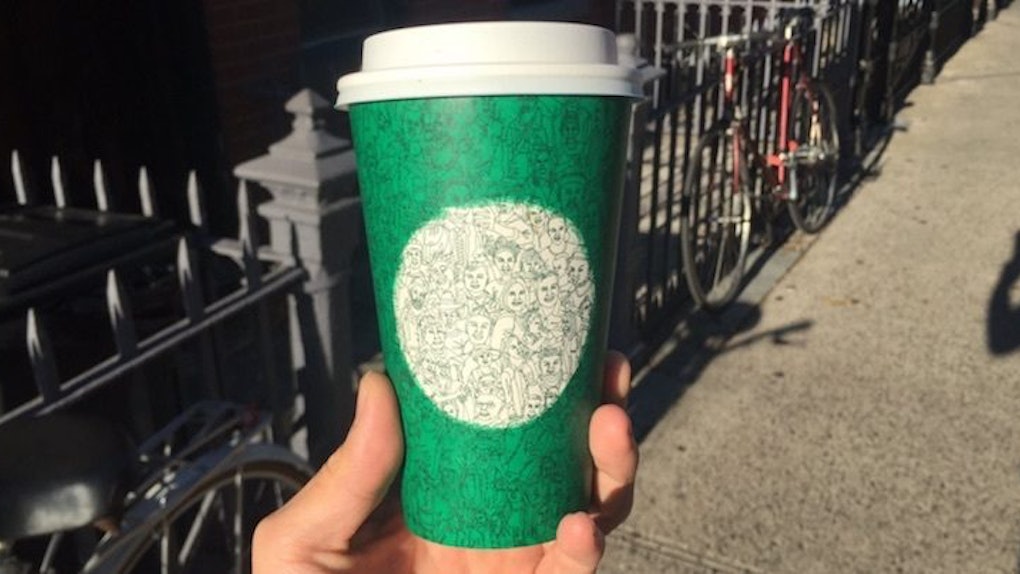 Autumn leaves are falling, the weather is crisp and the sound of humans bitching about Starbucks holiday cups fills the air.

It's that time of year when coffee-lovers across the country boycott Starbucks because its holiday cups aren't "Christmassy" enough, and we can't help but laugh about it.

Even though we've already been given a preview of this year's holiday cup edition (which, mind you, is Christmassy AF), people are losing their shit over a new cup Starbucks announced on Tuesday.

The cup, which is green and white in color, features a "mosaic of more than a hundred people drawn in one continuous stroke," according to Buzzfeed News.

Do you see the words "holiday" or "Christmas" anywhere in that description?

No? Me neither! You know why? Because it's not supposed to be a holiday cup!

According to the post, Starbucks' motive in releasing the new cup is to "remind us we're all connected."

They aren't meant to be Christmas cups, but people are still freaking the fuck out because they think they're being robbed of their holiday spirit.

In a recent Starbucks press release, Howard Schultz, chairman and CEO of the company, said,

During a divisive time in our country, Starbucks wanted to create a symbol of unity as a reminder of our shared values, and the need to be good to each other.

Still, unhappy Starbucks customers aren't getting the company's intentions and are using social media to vent about the cup.

Are we surprised? LOL, no.

This guy pretty much sums up the feelings toward the new green cup:

GUYS. CALM DOWN. IT'S NOT A HOLIDAY CUP.

This is getting ridiculous.

As you can see, people are VERY serious about their holiday Starbucks cups.

If they would only calm down for one second and realize they're complaining for no reason, maybe the world would be a happier place.

Until then, steer clear of angry coffee-drinkers when you pick up your latte on your way to work this morning.