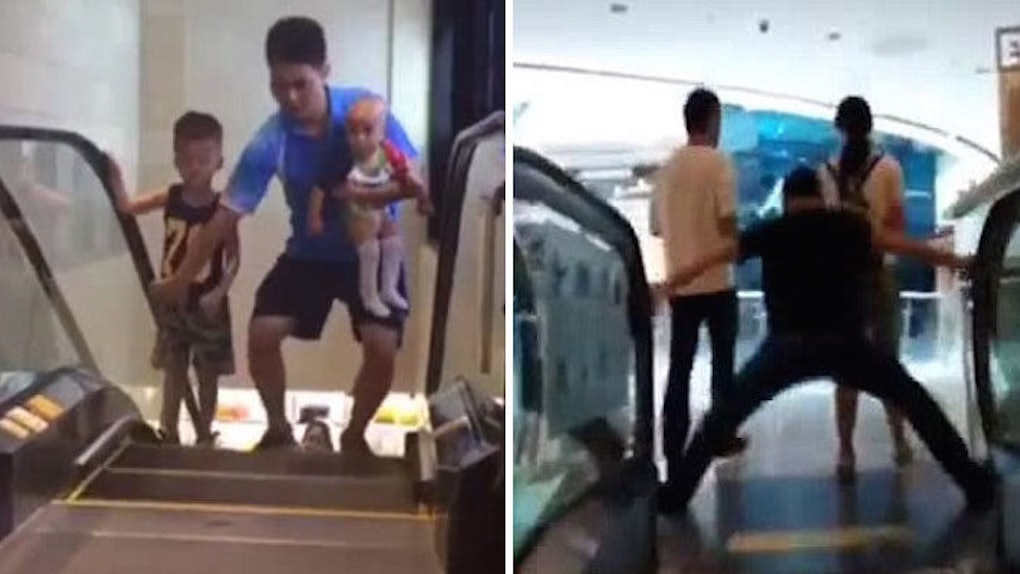 People In China Are Anxiously Approaching Escalators After Woman Dies

Yeah, I would be avoiding the top panel of an escalator, too.

On Monday, a video leaked of security camera footage from a Chinese mall, showing a mother saving her son before getting pulled into escalator gears after a loose panel collapsed beneath them.

Rightfully, the video spooked Chinese residents, and they are now using different methods to avoid suffering the same fate.

Some poke the top panels with umbrellas to make sure the machines are sturdy, some awkwardly sidestep around them and others avoid them completely by long jumping the gaps.

Chinese residents are especially frightened because the event in the security camera footage is reportedly far from an isolated incident.

According to Daily Mail, last year, 20 people were injured in a Beijing subway station after an escalator suddenly reversed direction while moving. In 2011, a similar incident in Beijing allegedly resulted in the death of a 13-year-old male.

On Monday, there were two other incidents involving escalators in China, CNN reports.

The first happened in the southwestern Guangxi province when a toddler needed to be hospitalized after suffering multiple traumas including a fractured arm when he tripped and got stuck in an escalator gap.

The other incident involved a boy in Beijing who needed to be rescued by firefighters after his foot got wedged in a shopping mall's escalator.

Citations: Chinese shoppers go to extreme lengths to avoid escalators after a woman was swallowed when a metal plate gave way (Daily Mail)