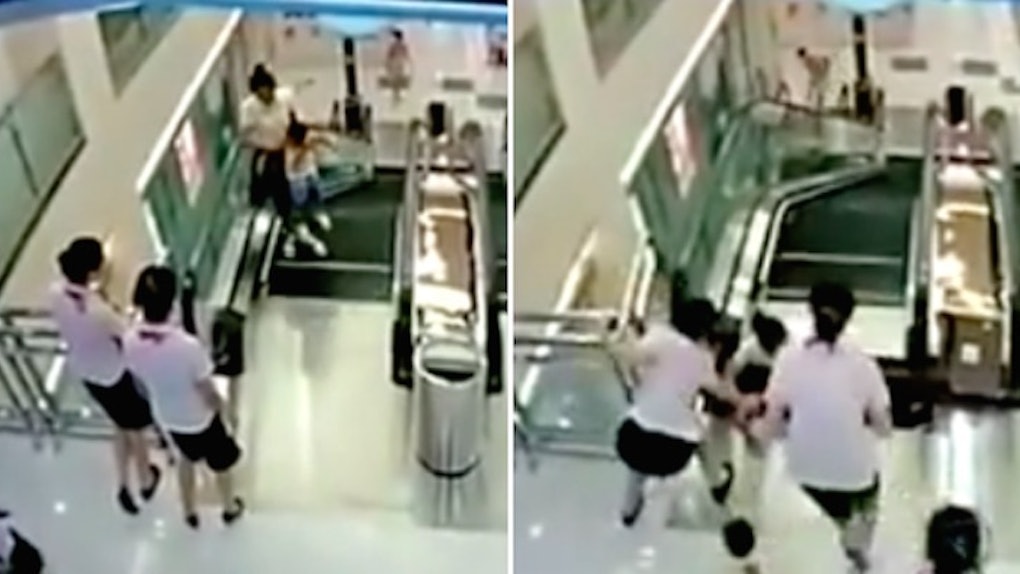 A mother in China was reportedly killed when she fell into an escalator seconds after saving her son from a similar fate.

The woman -- whom local media outlets are identifying as 30-year-old Xiang Liujuan -- was riding an escalator in the AZG Mall in Jingzhou with her son when the incident happened.

A clip of the incident, which appears to have been captured by mall security cameras, shows Xiang and her son getting to the top of the escalator when a platform suddenly falls through.

She heroically pushes her son to safety but is pulled in by the escalator's gears seconds later, despite the efforts of onlookers who tried grabbing Xiang's arms.

At the end of the clip, you can see one of the onlookers picking up Xiang's son and escorting him quickly away from the scene when she realized what just happened.

It apparently took workers almost four hours to get Xiang out of the gears.

She was pronounced dead on the scene when firefighters cut open the side of the escalator.

According to a local news interview with a family member, the woman's husband witnessed the whole thing and “almost collapsed” on the spot.

After the incident, Xiang's son allegedly kept asking "Where is my mom?"

The Paper, a Chinese news outlet, reports Xiang was warned the escalator had been malfunctioning when she was halfway up the flight, though there were no signs alerting her to potential mechanical issues prior to getting on.

Local TV outlets say workers had been doing construction on the escalator but forgot to secure the floorboards at the top.

An investigation into the incident was led by the city's Work Safety Administration's Chen Guanxin, who said there was no construction happening on the escalator at the time of the incident.

After video of the death surfaced, Weibo, which is China's version of Twitter, was flooded with shocked bystanders and other residents expressing their condolences to the family and anger over what happened.

One user wrote how the store needs to accept responsibility for the mechanical failure, saying,

Why didn't store employees cordon off or shut down the escalator? The department store definitely bears responsibility for this.

Another took the moment to discuss the mother's heroic act,

When I saw her fall in I felt awful -- but at the same time I felt how strong a mother's love can be - during such a sudden event, the mother's first reaction was still to push the child away from the gap.

CNN reports the incident is still under police investigation.

Warning: Images shown in this video are incredibly graphic.

Citations: Mom Seen On Security Footage Saving Her Son Before Being Killed By An Escalator (BuzzFeed)