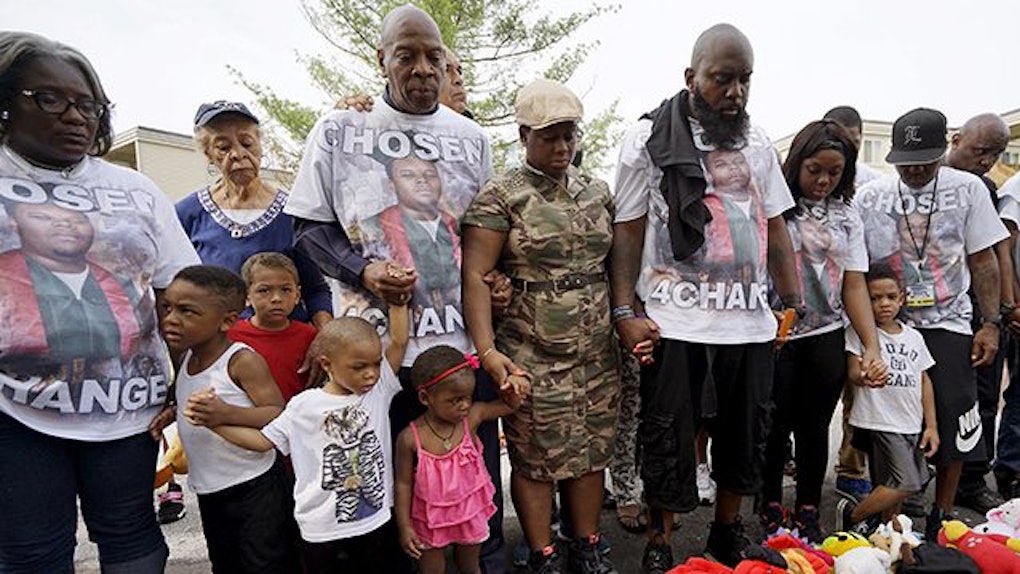 It turns out Michael Brown might not have robbed a store after all.

A new documentary reveals footage that hadn't been seen by the public in the two years since Brown's killing.

The new footage shows Brown entering a Ferguson convenience store after midnight, on the morning of the day he died. After entering, he puts an object of his on the counter.

The clerks behind the counter examine the object, then Brown is given two boxes of cigarillos in a bag in return. He begins walking out of the store with the bag, but turns back around and gives the bag back to the clerks.

The new footage was revealed this past weekend during the debut of the documentary, "Stranger Fruit," at the annual South by Southwest festival in Austin. The film analyzes the shooting of Michael Brown from his family's viewpoint.

Here's the footage, as presented in the documentary.

The narrator asserts that an exchange of weed for cigarillos had taken place.

The St. Louis County Police Department has not yet confirmed the authenticity of the video, however, the store's lawyer appeared to acknowledge the incident in the new footage.

There was no transaction. There was no understanding. No agreement. Those folks didn't sell him cigarillos for pot. The reason he gave it back is he was walking out the door with unpaid merchandise and they wanted it back.

The "Stranger Fruit" footage does call into question the police's narrative of what Michael Brown had done.

Two years ago, Ferguson police released a separate video, which showed Brown going to the store around noon on the same day.

In that particular video, Brown is shown shoving a store clerk before walking out with cigarillos -- an act which implied a robbery had taken place.

Now, with the clip featured in "Stranger Fruit," the story gets a little more complicated.

There was some type of exchange, for one thing, for another... These people know each other well enough that this is the relationship they have.

McSpadden also says when Brown returned around noon, there was a "misunderstanding."

Because police decided to release one video, while apparently keeping another under wraps, there are people who are upset about the way Brown had been depicted.

They destroyed Michael's character with the tape, and they didn't show us what actually happened. So this shows their intention to make him look bad. And shows suppression of evidence.

The view is that many people received the first video as justification for Mike Brown's fate. Now, this new video questions the narrative which was used as justification.

Regardless of what Brown did or did not do in the store, this is as good a time as any to reiterate something that should already be clear: It doesn't matter.

By far, the most important discussion that emerged from Ferguson was one that focused on a simple question: How badly do police treat people of color?

After the federal government's investigation into the Ferguson police department, we know the answer is what many people of color have been saying all along: terribly.

Nothing about this new video changes that reality, nor should it distract from how much we should focus on making a new reality, either.