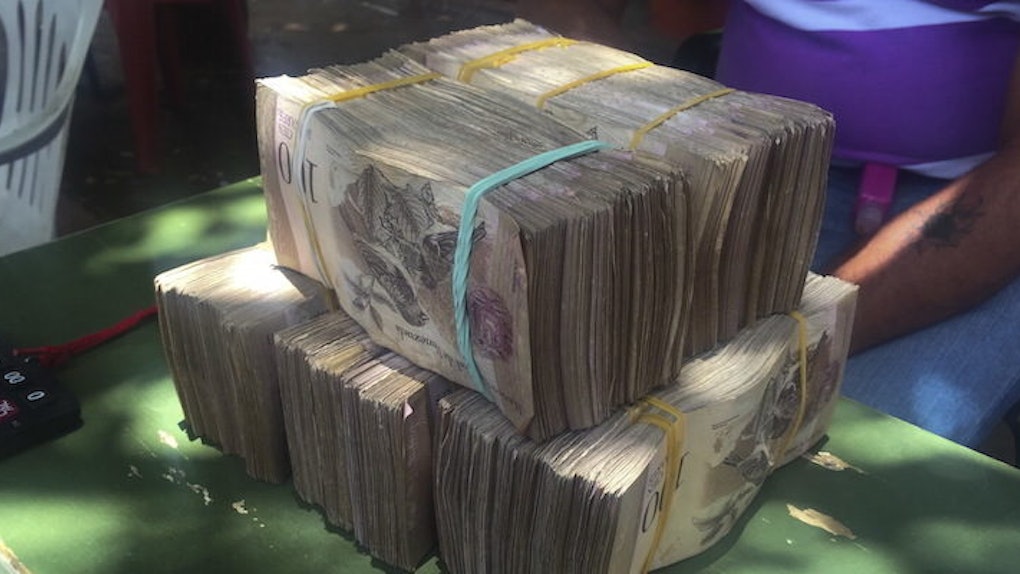 Venezuelan Money Is So Inflated It's Weighed, Not Counted

So, not entirely sure how familiar my readership is with economic issues, so please forgive me for this possibly unnecessary explanation.

Inflation is when the value of currency falls, meaning that each individual bill is worth less and less.

And Venezuela's inflation is completely out of control. At this point, according to the Washington Post, it's expected to reach 720 percent this year.

A pack of cigarettes went from costing 250 bolivars to 2,000 bolivars a pack.

Amazingly, as the Washington Post points out, "The biggest bill — 100 bolivars — is worth about 5 US cents on the black market."

So that pack of cigarettes takes a minimum of 20 bills to pay for.

The Independent puts it another way:

Withdrawing the equivalent of £5 from an ATM produces a fistful of more than 100 bills. Some ATMs now need to be refilled every three hours, because the machines can only hold so much cash.

This means that normal wallets are pretty much completely useless now, since they can't hold enough bills. People are literally using gym bags.

And to save time, cashiers have consistently reported that they've resorted to literally weighing cash instead of counting it.

Bloomberg Markets interviewed one such cashier, who said that he uses the scales used for weighing cheese to weigh cash now:

It's sad. At this point, I think the cheese is worth more.

The thing is, Caracus, Venezuela, is also one of the most dangerous cities in the world, so cashiers walking home from a day's work with garbage bags full of money is extremely unsafe.

Financial Director of Capital Market Finance, Jesus Casique, explained it to Bloomberg like this:

When they start weighing cash, it's a sign of runaway inflation. But Venezuelans don't know just how bad it is because the government refuses to publish figures.

OK, so how did this happen?

If you haven't noticed, the price of gas has been dropping for years. If you're old enough, you'll remember a time when oil was extremely expensive and everyone complained about it.

Well, in 2014, as the Independent points out, the price of oil dropped by two thirds globally.

Anyway, a shocking 95 percent of Venezuela's exports can be attributed to oil. It's a quarter of the country's economy. So when a quarter of your economy suddenly plummets, the country goes into a tailspin.

And when things started to go bad, the government just ordered banks to print more money, which made inflation even worse, even as the price of ordinary goods rose.

Basically, they had all their eggs in one basket. And that basket fell down the stairs.

And at the bottom of the stairs there were more stairs.

And it fell down those, too.