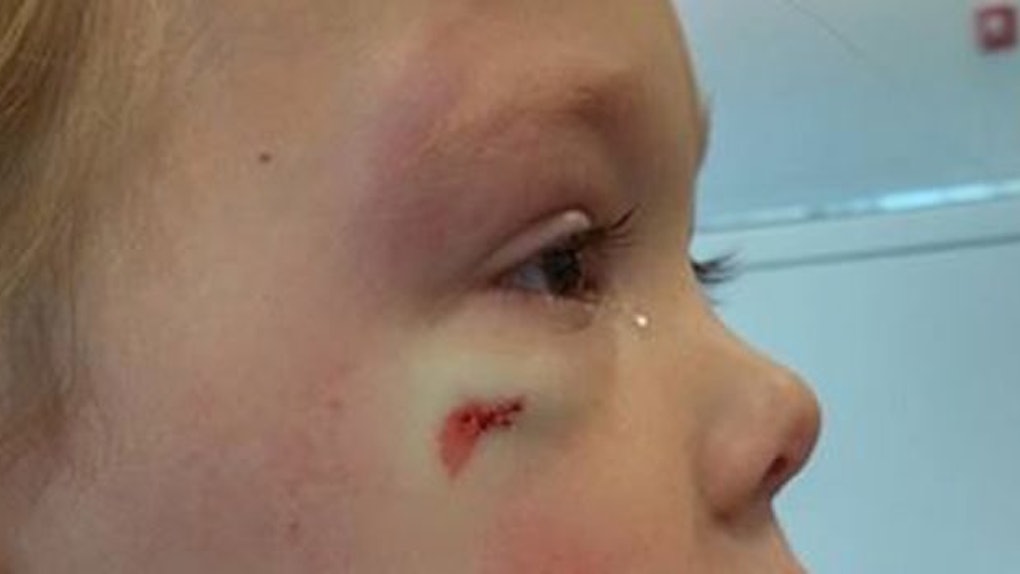 Merritt Smith turned her disgust with how a hospital worker treated her 4-year-old daughter into a lesson about not allowing young girls to become passive victims of abuse.

On Tuesday, the Ohio mother posted a picture showing her daughter's face after it was apparently hit by a boy at school.

She claims when she checked in her daughter at Nationwide Children's Hospital, a man at the front desk tried to reassure the little girl by saying,

Merritt's response to this was perfect.

"I bet he likes you."Dear man at the registration desk at Nationwide Children's hospital, l'm positive that you didn't... Posted by Merritt Smith on Tuesday, October 6, 2015

'I bet he likes you.' Dear man at the registration desk at Nationwide Children's Hospital, l'm positive that you didn't think that statement through. As soon as I heard it I knew that is where it begins. That statement is where the idea that hurting is flirting begins to set a tone for what is acceptable behavior. My 4-year-old knows 'That's not how we show we like someone. That was not a good choice.' In that moment, hurt and in a new place, worried about perhaps getting a shot or stitches you were a person we needed to help us and your words of comfort conveyed a message that someone who likes you might hurt you. No. I will not allow that message to be OK. I will not allow it to be louder than 'That's not how we show we like each other.' At that desk you are in a position of influence, whether you realize it or not. You thought you were making the moment lighter. It is time to take responsibility for the messages we as a society give our children. Do not tell my 4-year-old who needs stitches from a boy at school hitting her 'I bet he likes you.' NO.

Since the post was uploaded, it's been shared by over 20,000 people and the comments are filled with people expressing their support for the way Merritt handled the situation.

Hopefully, this sheds some much-needed light on an obvious societal problem with victim-shaming and blame-passing.

Citations: Hospital Employee's Response to 4-Year-Old Girl Who Was Beat Up at School Will Enrage You (Cosmopolitan)