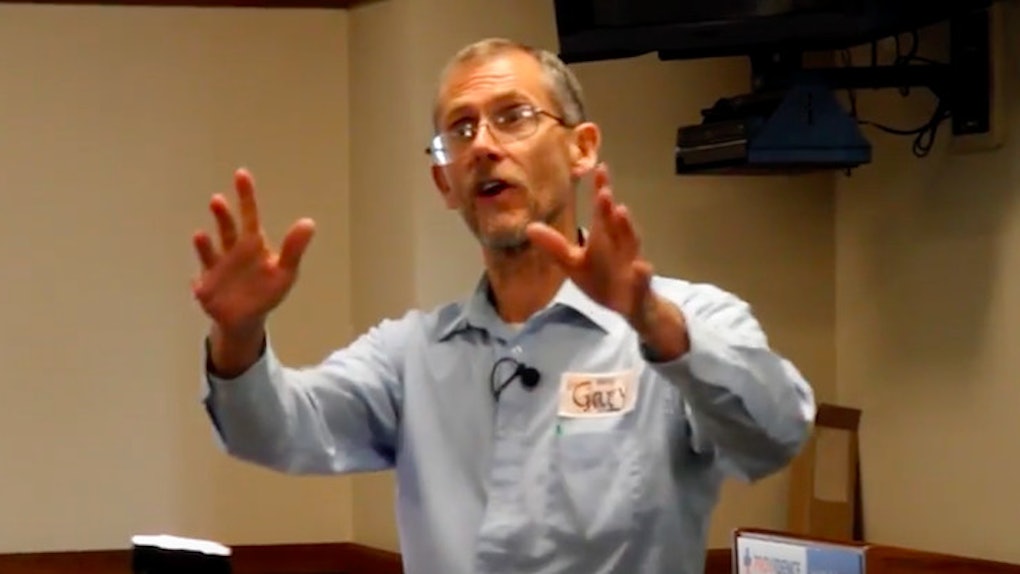 Married Teacher Admits He's A Pedophile In Front Of Audience

A self-confessed pedophile and former teacher has come out in a bizarre YouTube video.

Gary Gibson, 65, says he is attracted to girls as young as six, but claims to have never acted on his urges.

The Oregon man has set up the Association for Sexual Abuse Prevention for people with the same mindset.

During one of his meetings, he explained he was raised in an abusive family.

I know for a fact that my father sexually abused several of my sisters. Nearly all of them. [...] Is pedophilia inherited? I don't know. But whatever inheretance I got from my ancestors —my grandmother, my grandfather, my father — passed down to me through the genes, I think was initialized by experiences I had as a young person. When I was 6 — some of my family may not even know this — two of my older sisters taught me to play go to sleep, and my understanding was I was to take their panties off and get them ready to go to sleep. I don't think it was abuse. I don't think it was harmful to me, but it left me with the impression that little girls want to be touched by boys.

He went on to say he played "doctors" with two of his male cousins at summer camp.

Gibson claimed that back in the '50s "every male I knew was sexually attracted to children —little girls."

Despite his mindset, he says he has never crossed the line. He explained,

I knew I was attracted to little girls. Maybe I was a little close. Maybe I hugged them too tight. Or maybe did some thing that I shouldn't have done. But I didn't, I have never penetrated a child. I never – what I would call – had sex with a child. I choose not to do that, but I struggle with it.

Gibson married British nurse Tabitha Abel in 2005 after meeting her on a Christian dating website.

He revealed his pedophile tendencies early on in the relationship and she has been fully supportive.

Citations: 'I'm a normal guy. I just fancy six-year-olds: 'Virtuous' paedophile who is aroused by girls aged under 13 but 'doesn't act on his impulses' reveals why his British wife has stood by him (MailOnline)