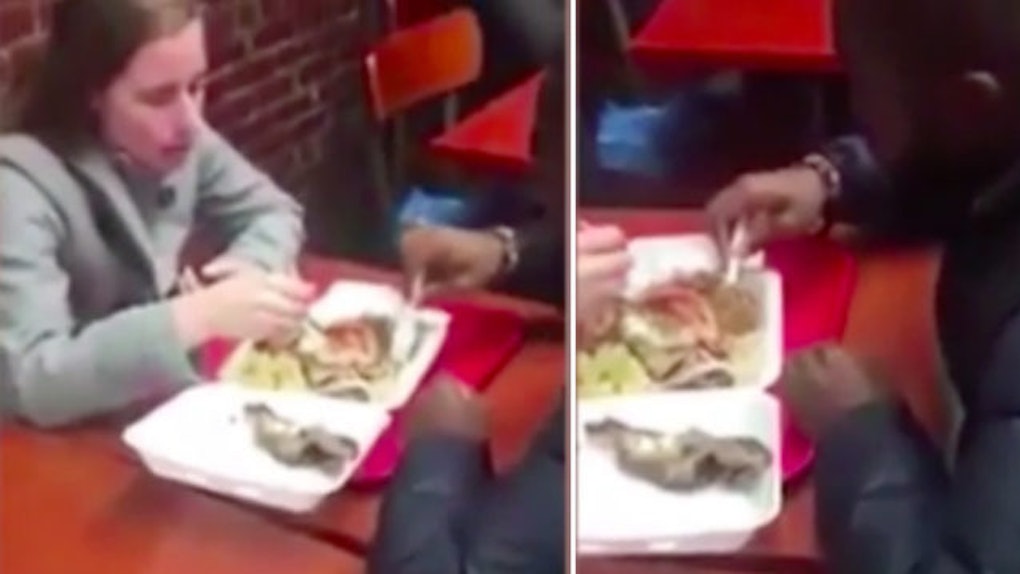 In your morning asshole news of the day, a man publicly berated and harassed an interracial couple at a restaurant and filmed the entire exchange.

In the video posted by World Star Hip Hop, viewers deduce the harasser is a black man who has strong, vulgar opinions about the African American man dating a white woman, MetroUK reports.

He opens by calling the situation "fuckery," stating, "Look at the fuckery, in a black-owned restaurant."

Approaching the couple with the camera rolling, he asks the boyfriend if the two are in an intimate relationship. Clearly confused by the situation, the boyfriend laughs and says, "Yeah, what's up?"

What comes next is an onslaught of insults and verbal assault spewed at the couple.

The man goes on, "You couldn't find no black woman? Like, you had to go that low, to the lowest rung of humanity. If they even humans, it's arguable that they even humans."

He explains he doesn't "normally interview y'all cause it gets me so upset," but he had to in this circumstance so he could ask the man why he is so "weak."

The boyfriend, remaining calm, tried to interject a few times. But the harasser goes on to exclaim how shocked he is that the couple had the audacity to share a meal in a "black-owned restaurant," speaking over whatever the boyfriend is saying in retaliation.

The video fades with the man asking, "What was it that made you that weak — that you'd get on your knees and bow to this less-of-a-female — that's lesser than a black woman in every way?"

Racial tension has been high ever since Trump was elected. Earlier this year, an African American woman from Rhode Island shared a video of her white boyfriend spewing racist hate, instigated by Trump's presidential campaign. She dumped him shortly after.

Trump, of course, is no stranger to his own discriminatory and racist behavior.