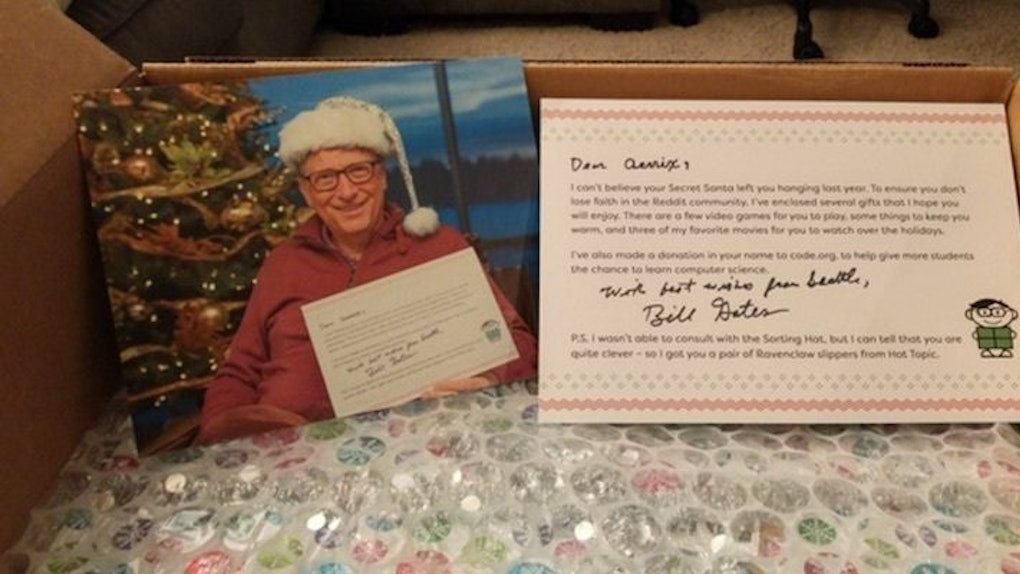 Woman Gets Bill Gates When She Plays Reddit Secret Santa

When Bill Gates is your Secret Santa, you know you're in for a real holiday treat.

A lucky Reddit user by the name of Aerrix might as well have hit the lottery when she found out Mr. Gates himself sent her a box full of Christmas gifts.

She posted an update on her Reddit Gifts page this afternoon expressing how ecstatic she was when she began opening the gifts sent to her doorstep.

In her Secret Santa profile, Aerrix made it apparent she really loves video games, the Legend of Zelda series, Mario, "The Little Mermaid," "Harry Potter," and The League of Legends.

Her photo on the page also shows her dog, Claire, snuggling with her and her husband.

Based on the provided information, Bill Gates came to a few *very* accurate conclusions and sent Aerrix the presents of her dreams.

The overjoyed Redditor begins the post by describing how she discovered the "giant box" that was delivered by FedEx this morning.

Shortly after, she describes the epiphany she had upon discovering the fact Bill Gates was her Secret Santa.

So then I get the box open and there's just bubble wrap EVERYWHERE, but under the first layer I see a picture... and my jaw. Just. Drops. I will let the picture speak for itself!

There he is, everyone: Bill Gates, aka Santa Claus.

I can't even imagine how excited Aerrix must've been at this very moment, but by the sound of it, she was over the top with happiness.

Upon finding out Bill Gates was her gift giver, she immediately called her husband. He had to get back to work, so she called her mother instead and kept her updated upon opening each gift.

And I said BILL GATES IS MY FREAKIN SANTA!!!!!!!! I worried him too much, it took a second for it to sink in but oh MAN I was excited and flipping out! He had to get back to work so I called my mom and talked to her and sent pics the whole time I was opening presents!

All right, Aerrix. Deep breath in, deep breath out.

Let me tell you: This 30-year-old woman was not disappointed by the presents he chose for her.

In a series of jaw-dropping, detailed accounts of how Aerrix opened the gifts, she explained all the amazing things Bill Gates personally sent her.

A few of them include matching Zelda mittens for her and her dog, an XBOX One Minecraft Edition with wireless controllers, a pair of slippers (which she's still wearing), a Cajun cookbook (to match her uncle's cooking), a Zelda tie blanket, movies and much, much more.

Aerrix won Christmas, all thanks to Bill Gates. She wrote,

Merry Christmas to all yall out there, and to Mr. Gates, who has the biggest heart and REALLY KNOWS HOW TO TREAT A GIRL TO SOME VIDEO GAMES (and video game paraphernalia)! I'm just blown away by his generosity...

I'd say he's generous, all right.

Maybe I'll play Reddit Secret Santa next year... but only if Bill Gates plays again, too.