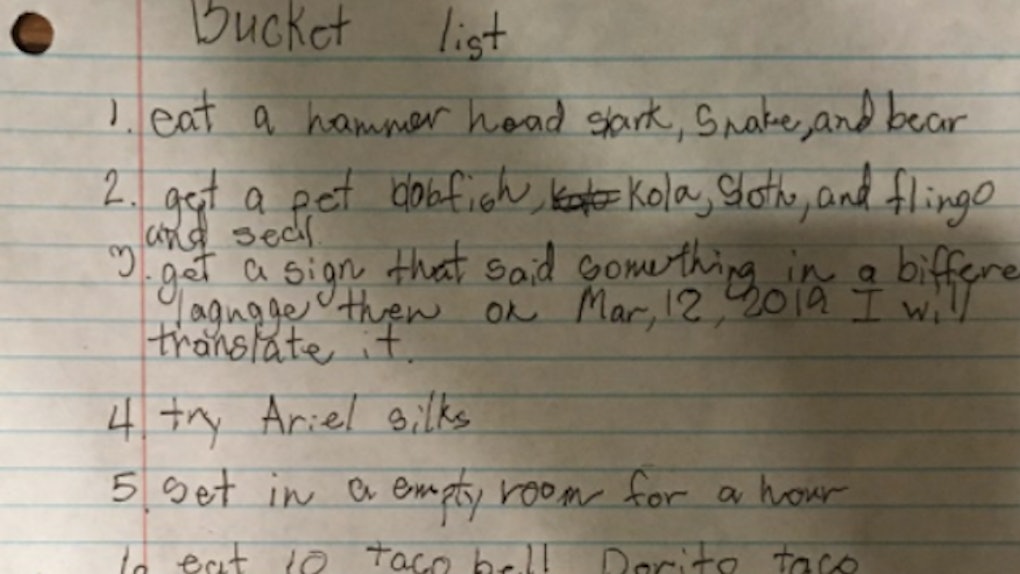 Little Girl's Bucket List Is Most Bizarre Goals Ever

Everyone should write a bucket list at 10 years old.

Sure, as a 20-something guy, I could write one today, but there's no way it would be anywhere near as entertaining as one I'd write at 10.

And to be honest, I'd probably rather accomplish all the things I wanted to do back then.

This brings me to 10-year-old Jesse, whose bucket list is probably the most bizarre one I've ever seen.

She wrote down nine goals, which her older brother Josh found and tweeted for the whole world to enjoy.

Let's go through Jesse's list one by one and try to figure out what the hell is going on in her head.

It's the kind of thing you'd imagine The Rock to do at weekends... maybe slightly too bloodthirsty for a 10-year-old girl.

Get a pet blobfish, koala, sloth, flamingo and seal.

Ahh, this is more like it. Though how on Earth is she going to own a big enough pad to house all these creatures?

Poor Jesse is too young to fathom the cost of a property. Let's allow her to keep living that wonderfully naive life.

Get a sign that said something in a different language, then on March 12, 2019 I will translate it.

In just over two years, Jesse will be 12, and if she can master a new language by then, it would be a great achievement and a useful life skill.

Or, you know, she can use Google Translate.

Easily the most achievable target so far — one lesson counts as trying it, right?

She could tick that off whenever she wants.

Sit in an empty room for an hour.

Nope, I just don't see the appeal of this one.

Jesse is my spirit animal.

Humans haven't learned how to hibernate yet, but if Jesse manages to figure this one out, I'm legit asking her for tips.

Ambitious, dangerous, adventurous and, I'm not gonna lie, a pretty awesome thing to aspire to.