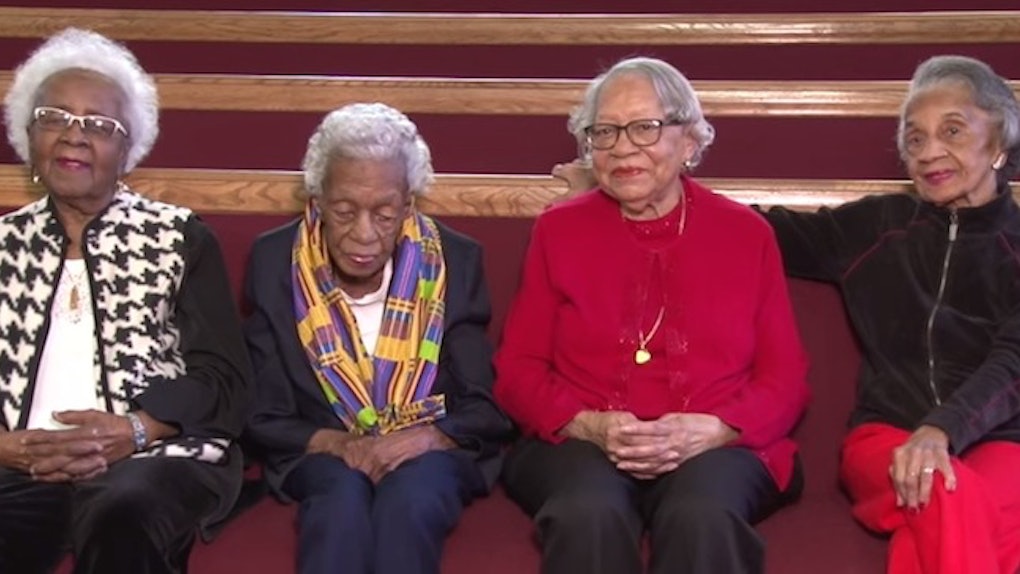 Ruth Chatman Hammett, Gladys Ware Butler and Bernice Grimes Underwood have been the very best of pals for nearly a century.

On Saturday, they celebrated the milestone of being alive for 100 years at Zion Baptist Church, a church in Washington DC they've attended since childhood. All of them were born in June or July in 1916, The Washington Post reports. They were hoping for another friend, Leona Barnes (pictured above all the way to the left), to also attend the celebration at the church, but sadly she died in May.

The lives of these women are a testament to the power of friendship.

Beyond the inspiring nature of their relationship, it's pretty incredible to stop and think what these women lived through.

Correspondingly, one of the congregants at the church happened to be a makeup artist for Oprah Winfrey, and convinced Oprah to film a short video for the three friends.

In the video, Winfrey stated,

The things you must have seen over the last century. I don't know what to say.

Indeed, it's baffling to think about everything that happened across the US and worldwide in the past 100 years.

While this isn't a complete list of all of the major events that occurred in the last 100 years, here are 33 insane occurrences that happened in the lifetimes of these three amazing friends.

World War I lasted from 1914-1918, claiming the lives of approximately 8.5 million soldiers from all over the world.

Alcohol was illegal in the United States from 1920-1933 (but that didn't stop people from drinking it).

Women were not granted the right to vote in the US until 1920.

America's first TV station went on the air in 1928.

The Great Depression, the worst economic calamity in US history, lasted from 1929-1939.

The US was launched into World War II after its naval base at Pearl Harbor was attacked by Japan on December 7, 1941.

World War II lasted from 1939-1945, and claimed the lives of approximately 70 million people.

The Holocaust was the mass murder of approximately six million Jews (in addition to other groups, such as the Roma and homosexuals) by the Nazi regime during WWII.

The US dropped two atomic bombs on Japan (one in Hiroshima and one in Nagasaki) in August 1945. This remains the only nuclear attack in history.

The Cold War, a social, political and technological conflict between the US and the Soviet Union, began after World War II and lasted until 1991.

The Korean War lasted from 1950-1953. It marked the first time US troops went into battle since the end of WWII.

In 1957, the Soviet Union launched the first artificial satellite, Sputnik I, into space. This was the beginning of the Space Age.

The nation was left shocked after President John F. Kennedy was assassinated on November 22, 1963.

The Civil Rights Act of 1964 ended segregation in public places and banned employment discrimination on the basis of race, color, religion, sex or national origin. It was a product of the brave efforts of those involved in the American Civil Rights Movement.

The Vietnam War lasted from 1954-1975, with active US combat units introduced in 1965. Millions of Vietnamese died and approximately 58,000 members of the US armed forces were killed or went missing.

Martin Luther King, Jr., one of the most revered figures in US history, was assassinated on April 4, 1968.

Robert F. Kennedy, brother to President John F. Kennedy, was assassinated on June 6, 1968 while he was running for president.

Landing on the moon

On July 20, 1969, Apollo 11 landed on the moon. It was the first moon landing in history, and a massive achievement for humankind.

Watergate was a massive political scandal in the 1970s that led to the resignation of US President Richard Nixon in August 1974.

In 1979, a group of Iranian students stormed the US embassy in Iran and took more than 60 Americans as hostages. The Americans would remain hostages for another 444 days, and this event would set the tone for a contentious relationship between the US and Iran that continues to this day.

On March 30, 1981, President Ronald Reagan was shot outside the Hilton Hotel in Washington DC just 69 days into his presidency. He survived the shooting.

The first truly portable phone was introduced in 1989 by Motorola.

Fall of the Berlin Wall

The Berlin Wall fell in November 1989, marking a major turning point in the Cold War.

The Persian Gulf War lasted from 1990-1991. The US and its allies defeated Iraq (led by Saddam Hussein) after it invaded Kuwait.

The World Wide Web was introduced in 1991, changing everything about how humans communicate and retrieve information.

The impeachment of President Bill Clinton

In 1998, President Clinton was impeached by the US House of Representatives. He was ultimately acquitted by the US Senate. Clinton is one of two presidents in history to be impeached.

On September 11, 2001, terror attacks in New York City and Washington DC claimed over 3,000 lives in the US, and launched America into the War on Terror. Four planes were hijacked, two hit the World Trade Center in NYC, one hit the Pentagon and another crashed in Pennsylvania.

The first iPod was introduced in October 2001, revolutionizing the way people listen to music.

The Iraq War began in 2003 and lasted until 2011. It was a controversial conflict with continued consequences.

Barack Obama was elected the first black president in US history on November 4, 2008.

Hillary Clinton became the first female in US history to clinch the presidential nomination for a major party in June 2016.

Ruth Chatman Hammett, Gladys Ware Butler and Bernice Grimes Underwood, friends for nearly a century, said they plan on voting for Clinton. If she ultimately wins, it would mean three women who were born before women could vote helped elect the first female president in American history. The three friends also voted for Barack Obama.

It's amazing what you can do and see in a lifetime.