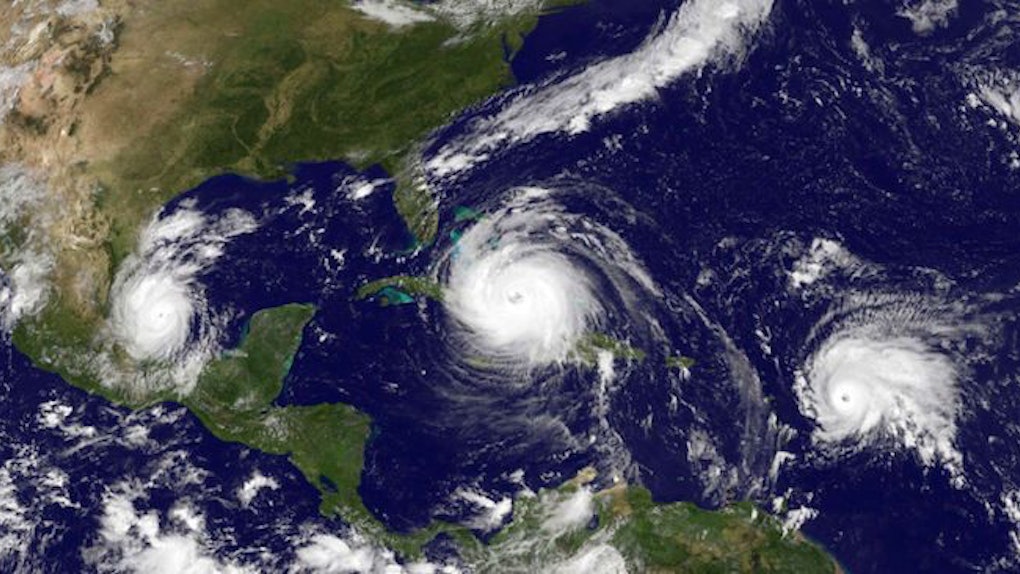 When Will Hurricane Irma End? It Will Take Time

You know things are bad when the good people of the National Hurricane Center are getting nervous. Though it's already caused massive destruction in the Caribbean, Hurricane Irma is scheduled to hit the southeastern U.S. over the weekend with little signs of mercy, and the Miami-based center is in the thick of it. As of right now, it's unclear exactly where the storm will go or when Hurricane Irma will end, but after Hurricane Harvey, no one's taking any chances.

Hurricane Irma has already devastated multiple Caribbean islands and at least 20 people have died, according to the New York Times. It's on track to strike quite a blow on Cuba, and projections for its U.S. impact don't look too rosy, either. Brock Long, director of the Federal Emergency Management Agency (FEMA), said in a news conference that parts of Florida will be without electricity for days and 100,000 people may need shelter. He added,

Hurricane Irma continues to be a threat that is going to devastate the United States in either Florida or some of the southeastern states. ... Anybody from Alabama to North Carolina should be watching this storm very closely.

The storm downgraded from a Category 5 to a 4 overnight on Friday morning, Sept. 8, and is expected to touch down on American soil between Saturday and Sunday morning. The latest prediction from the NHC as of 2 p.m. ET Friday read,

The eye of Irma should continue to move near the north coast of Cuba and the central Bahamas for the rest of today and Saturday, and be near the Florida Keys and the southern Florida Peninsula Sunday morning.

The hurricane is expected to remain of Category 4 strength when it hits Florida over the weekend. Much of the state is under hurricane watch or warning, especially in the Miami and Palm Beach areas, CNN reports, and many of their 6 millions residents are already evacuating the coasts and bracing for it's impact. The Times reports that the storm's toll on electricity could affect millions of people.

Based on the forecast models, Georgia and South Carolina appear in the potential danger zone of Irma's path. The northern areas could potentially be impacted by the hurricane early next week, according to Weather.com, but prediction charts show the wind speeds tapering off over the weekend, lessening to 75 mph by 8 a.m. ET on Monday, and 35 mph by Tuesday; the models taper off by Wednesday.

The models show multiple states in the "uncertainty cone," including North Carolina, Tennessee, and Alabama, but this doesn't mean those areas will be experiencing a hurricane per se -- they simply show possible areas that might be affected. Cones also don't take into account the actual size of the storm.

The president encouraged people to heed the hurricane on Twitter.

Storm surge and rainfall are of particular concern, as some areas of Florida are projected to have as much as 10 to 12 feet of water above normal tide levels sweeping onto the coast, according to the Weather Channel. Most of the state is projected to receive between 3 and 18 inches of rainfall, but southern Florida could see as much as two feet.

That's not as much as the record-breaking rain that Hurricane Harvey let loose -- which caused Houston to physically sink -- but even this much is nothing to laugh at. How fast the rain falls, and how efficient the drainage system of an area is, might mean the difference between oversized puddles and a full-on flood.

Residents of the southeastern U.S. are urged to closely monitor the storm projections and stay tuned to their officials' instructions throughout the week. According to the New York Times, the governor of Georgia has ordered evacuations for Saturday, and the South Carolina governor is considering doing the same.

God bless the folks at NHC, and stay safe, everyone!