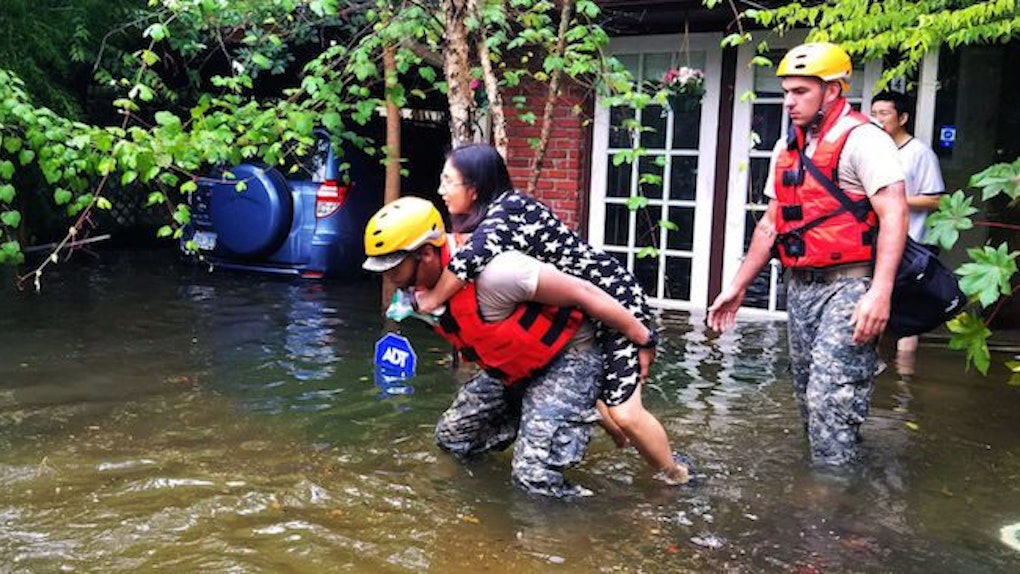 Hurricane Harvey Rainfall Is Monumental & This Is What It Means

After one of the worst tropical storms to hit the U.S. in recent memory ravaged Texas this weekend, the rainfall projections are being measured in feet. While the first major push of the storm has passed, Hurricane Harvey will come back though the Texas coastline, unloading more rain with it. Here's what 50 inches of rain means after Hurricane Harvey.

Unless you've lived through, say, monsoon season in India, it can be hard to understand what rainfall inches really mean in relatable terms.

What is the projection for Houston?

As of 1 p.m. ET Monday, Aug. 28, the National Weather Service reported 1 to 3 feet above normal tide level was expected, as were localized flash floods. They called the flood projection "life-threatening," and up to 50 inches are possible in some areas. Already, Harvey's rainfall has smashed Houston's records.

How bad is 50 inches compared to other hurricanes?

The Weather Channel reported ranges of 30 to 50 inches are expected throughout the region after the hurricane stops its downpour later this week. Texas has seen some monumental flooding, but 50 inches would surpass the totals from storms Allison, Claudette, and Amelia.

Hurricane Katrina dropped an average of 5-10 inches over 2 days, with a maximum of 10-12 inches seen in a few places. Hurricane Sandy offloaded a total of approximately 7 inches on the Atlantic coast. Hurricane Matthew clocked in around 20 inches in one place, and that was already saturated with rain.

Flooding depends on how equipped the area is -- and how fast the rain falls.

Pouring a large bucket of water down a small sink all at once might cause it to overflow, while pouring that same bucket slowly won't. That's the easy way to explain rainfall rate.

Rain doesn't normally fall at the same rate for consecutive hours, but we measure the rainfall rate this way anyway. According to the U.S. Geological Survey, 8 mm (0.31 inches) in an hour is considered "very heavy rain," while 50 mm (about 1.9 inches) is classified as "violent shower."

Obviously, flooding also depends on the geological setting, as some areas can handle more water than others. Space City Weather, a website that forecasts for the Houston area, reports the storm drains in Houston and Harris Counties manage about 1-2 inches of rain per hour.

Storm surge measures the amount of abnormal water that a storm carries, outside of a regular tide's activity. Think of an additional few feet of water coming up via the ocean, harbors, etc. If storm surge converges in areas where rainfall is already flooding the city, that could be catastrophic, says Samuel Brody, a flood expert quoted in The Atlantic.

What might happen to Houston with this much water?

The Atlantic points out that aside from flooding, which could potentially affect Houston's 6.6 million residents, there are a lot of other unpleasant consequences. For example, coffins are released, alligators find higher ground (like porches and backyards), and sewage spreads basically unhindered. To make matters worse, Houston is a hotbed of petrochemicals, and there are concerns about the toxic damage flooding will cause.

What does this much water mean?

If it's not already clear, 50 inches of water is a lot. Looking at it another way, one inch of water roughly equates to 13 inches of snow. So, math: 50 inches of rain water would look like 54 feet of snow.

The Federal Emergency Response Agency (FEMA) reports that 6 inches of water can make you fall; a foot of rain will float vehicles, and two feet will sweep away most of them, including SUVs and pickup trucks.

Emergency services and rescue agencies, as well as civilians, were working through the weekend to rescue those affected by Harvey's flooding.