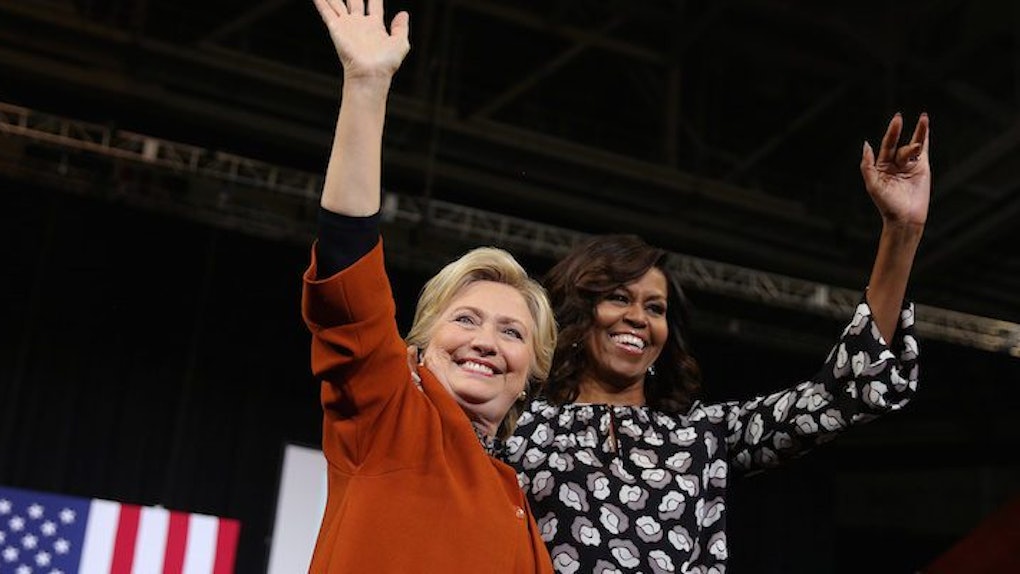 Barack Obama and Joe Biden's bromance might have to step aside for a bit. The sisterhood between Hillary Clinton and Michelle Obama is seriously thriving post-election, and it's the perfect ray of sunshine that we all probably need right about now. After hearing Michelle Obama's comments about female Trump voters, Clinton had some strong words of her own.

On Sept. 27, Obama sat down with author Roxane Gay for a Q&A session and discussed the 53 percent of women who voted for Donald Trump. She said,

Any woman who voted against Hillary Clinton voted against their own voice in a way. To me, it doesn't say as much about Hillary Clinton ― and everybody's trying to wonder. Well, what does it mean for Hillary? ―  No, no, no. What does it mean for us as women? That we look at those two candidates, as women, and many of us said, 'That guy. He's better for me. His voice is more true to me.' Well, to me that just says you don't like your voice. You like the thing you're told to like.

“I got to tell you what Michelle Obama said the other day just was music to my heart," Clinton said, "because she was her usual, candid, smart self about talking about the pressures that women, white women let's be clear, white women feel in this past election, but often times, in other settings as well."

Fifty-three percent of white women voted for Trump in this past election. That fact was definitely not lost on social media users, many of whom blamed the demographic for Trump's victory.

Clinton has discussed losing the white female vote in the past – and recently wondered during an interview on AM Joy why those women were "publicly disrespecting themselves" by aligning with Trump. She's referencing, of course, to voting for a man who bragged about grabbing women's genitals, objectified his daughter, etc., etc.

The former Secretary of State doesn't necessarily blame the women themselves, though. Instead, she points a finger at the men in their lives. During an interview with NPR in September, Clinton explained,

Clinton also blamed former FBI Director James Comey's email investigation, saying that the probe could have been a factor in losing the female white voter. She said,

After Comey's announcement, men could turn to their wives or girlfriends and say, 'I told you, she's going to be in jail. You don't wanna waste your vote.' And women voters who might have been on the fence decided not to vote for Clinton. 'Instead of saying, 'I'm taking a chance, I'm going to vote,' it didn't work.' I believe absent Comey, I might've picked up 1 or 2 points among white women.

So, just how accurate is Clinton in her theories?

Well, according to Kelsy Kretschmer, co-author of a recent study covering women's voting patterns, she's not so far off base. Kretschmer told The Guardian that women tend to receive a great deal of pressure from the men in their lives. White men, she added, are more often conservative, which means that their wives can "get a lot more pressure to vote consistent with that ideology.”

Women consistently earn less money and hold less power, which fosters women's economic dependency on men. Thus, it is within married women's interests to support policies and politicians who protect their husbands and improve their status.

This is all a lot to process. One thing to make it a little bit more digestible? After Obama dove into the psyche behind female Trump voters, she answered what her favorite song off Beyonce's "Lemonade" album is. It's "Love Drought." Miss you, Michelle.