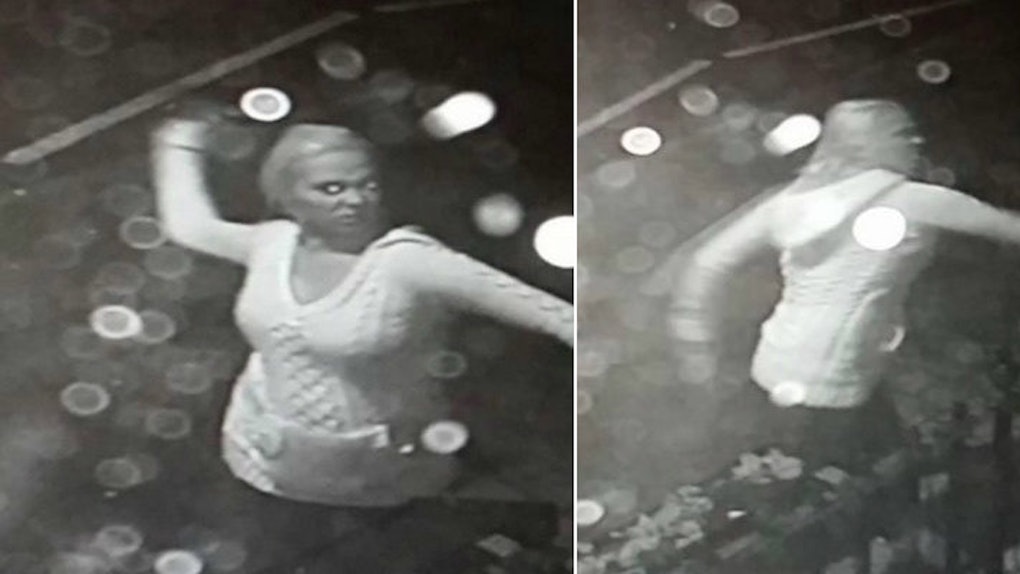 The Grinch travelled all the way from Whoville to Kirkham on Saturday night to wreck havoc outside a cafe that was decorated for Christmas.

The Grinch didn't actually make an appearance in the Lancashire town, but a woman with the same twisted priorities as him certainly did.

An alleged holiday-hater was caught on CCTV destroying Escape Cafe while the owners of the business were away on a catering job, MailOnline reports.

The blonde vandal -- whose name remains unknown -- was filmed ripping out flower beds that were displayed outside the store and throwing the muddy remnants at the front door.

James Haythornthwaite and Rebecca Kelly reportedly own the cafe and have lived in the apartment above the restaurant since August 2015.

After returning to the destruction and viewing their security camera's footage, they posted stills on the cafe's Facebook page with hopes the citizens of the town would recognize the "Grinch" that vandalized their property.

Well... this lovely lady decided last night that she wasn't happy with the way we decorated the front of the building - so she decided to do her own job whilst we were out at a function. Pulling out all the bedding plants that the council kindly provide for us and throwing them at the front door. I'm sure somebody will know who she is so please share this and let's shame this idiot.

Why is this chick so angry?!

I could imagine the owners looking a little bit like this while they watched the distressing footage:

Apparently, the woman on film was drunk and yelling at the building when she decided to ravage the scene.

James Haythornthwaite, co-owner of the cafe, reportedly spoke with MailOnline about their reactions to the wreckage.

It's really disappointing and there's no real reason why anyone would do this. I don't think the woman had ever come into the shop, we'd never seen her before. It's such a shame.

The other owner, Rebecca Kelly, chimed in and said,

Maybe she'd had a night out, had a few too many. Perhaps she thought somebody she knew was inside the building, we just don't know - but the place was empty at the time.

Whatever her reasoning was, she definitely would've made The Grinch proud.

It's been reported the town of Kirkham will be turning on its Christmas lights next week, but it seems like Escape Cafe will need a little extra holiday cheer this year.

Fortunately, Lancashire police will be investigating the incident.