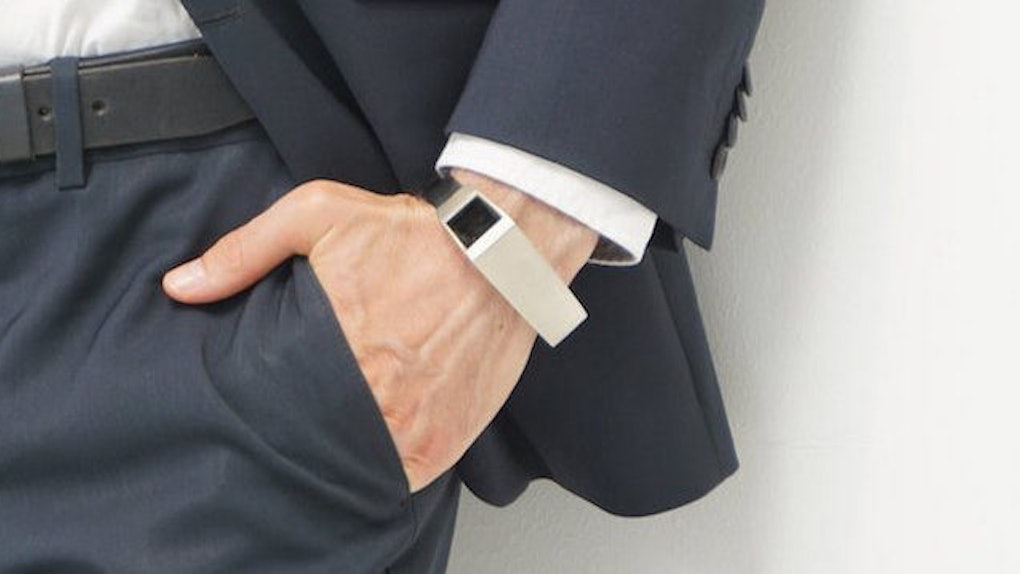 A new invention is giving men the chance to enjoy the perks of being pregnant (minus the whole getting fat and actually giving birth thing).

Fibo is a bracelet men (or anyone else) can wear on their wrists that allows them to feel baby kicks inside their baby mama's uterus.

The company's head of research and media, Sandra Pétursdóttir, created the product to give fathers the chance to feel like they're involved with the life that's being created in the mom-to-be's belly.

Many fathers we spoke to said they first realized they were bringing a new life into the world when they heard their baby's heartbeat for the first time. We want this feeling to last longer.

The Huffington Post also reports that the awesome and majorly futuristic idea came from three jewelry design students from Copenhagen School of Design and Technology after taking a class on wearable technology.

Pétursdóttir told HuffPo that she and her fellow students were inspired to create a product for expecting parents after noticing their school's family-friendly neighborhood.

"There are a lot of young, hip parents walking around and playing with their babies," she said.

They also wanted to helped fathers feel more like they were a part of the pregnancy process because men "sometimes tend to get a little left out when the mother is going through all the changes with her body and feeling a little life growing in her belly."

Even though the Fibo bracelet sounds like some sort of crazy rocket ship sent to us straight from robots from the future, the way it works really isn't all that complex.

Now, here's where it gets cool.

The baby kick monitoring device is connected to the Fibo bracelet. Inside, the bracelet has four small beads that will move to mirror the the baby's movements in the mom's womb.

This lets the dad (or the grandma or whoever wants to wear the bracelet) feel the baby moving in real-time.

"With Fibo, we are hoping to share the experience of pregnancy," Pétursdóttir explained. "When the pearls inside the bracelet start rotating the father will know his baby is kicking or moving without putting his hands on the mother's belly. He can therefore feel this wherever he goes."

While Fibo is still being developed and has yet to be tested, the creators are working with a focus group of pregnant couples and new parents to get a feel for what their clients really want out of the product.

So far, the focus group has been helpful for the creators. It is actually how they landed on the idea of a bracelet as their product.

They learned that many fathers wanted the product to be visible to the outside world "because they wanted the whole world to see they were expecting a baby," explained Pétursdóttir.

So I guess all we can conclude from this is 1) we are living in the future and 2) that guy in your office who won't shut up about his pregnant wife has a new way to annoy you.

Citations: This Bracelet Lets A Dad Feel What It's Like To Be Pregnant ... In His Wrist (The Huffington Post)