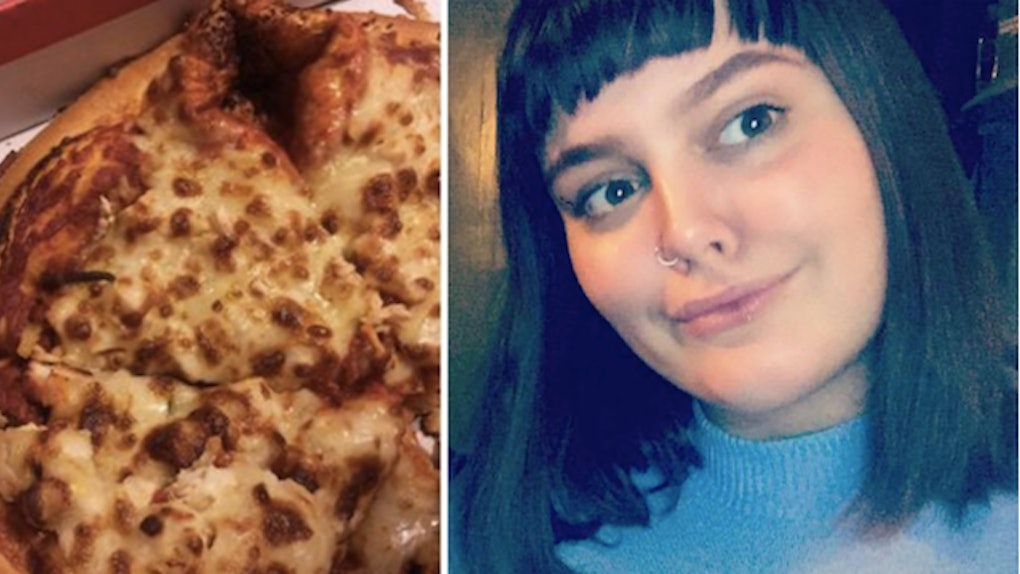 Teen Finds Insect In Pizza And Posts Video On FB

Warning all pizza lovers: This video will legit put you off picking up a slice or two... at least for a few days.

Pizza is delicious, and eating it should only be an enjoyable experience — so what happened to 16-year-old Tia Neylan is extremely distressing for pizza fans across the globe.

The teen was about to go to town on a take-out pizza when she spotted some kind of insect emerging from the crust.

And yes, there's a video of it. And yes, it's absolutely disgusting.

Remind you of anything?

Tia, from Stockton in England, told GazetteLive she “threw up everywhere” after she saw the bug coming out of her dinner, which she had ordered from Express Pizzeria in Norton.

It's totally understandable. I absolutely adore pizza, so this would scar me for life if it happened to me.

Anyway, Tia sent out a clip of the flailing black insect on Snapchat and posted on Facebook about the traumatizing experience.

However, the owner of the pizzeria, which was once given a one star out of five hygiene score by the local council, believes the clip is a fake.

I literally just threw up everywhere. I even had a little break down. As you can imagine, it was obviously a shock for me and my family. I didn't even notice it until I'd taken a bite from a slice. I looked at the pizza in the box, as you do, and there it just was wiggling around.

But Mr. Bashir, owner of Express Pizzeria, doesn't believe the clip is real — and some people on Facebook have also questioned it.

He said an insect could not survive being cooked in a hot oven and couldn't have been in the box beforehand.

But Tia is convinced about what she saw.

Don't order from Express Pizzeria, Norton High St, Stockton-on-Tees, open the box to find this, fucking disgusting. Returned it and all they had to say was “it's cheese.” Family has been ordering from there for years and have had nothing bad to say about them before but this…

So there you go: Even pizza can betray you in the cruelest way. This is why I have trust issues.

Citations: Teen claims she was sick after finding bug on pizza - but takeaway owner says 'for me it is fake' (GazetteLive)