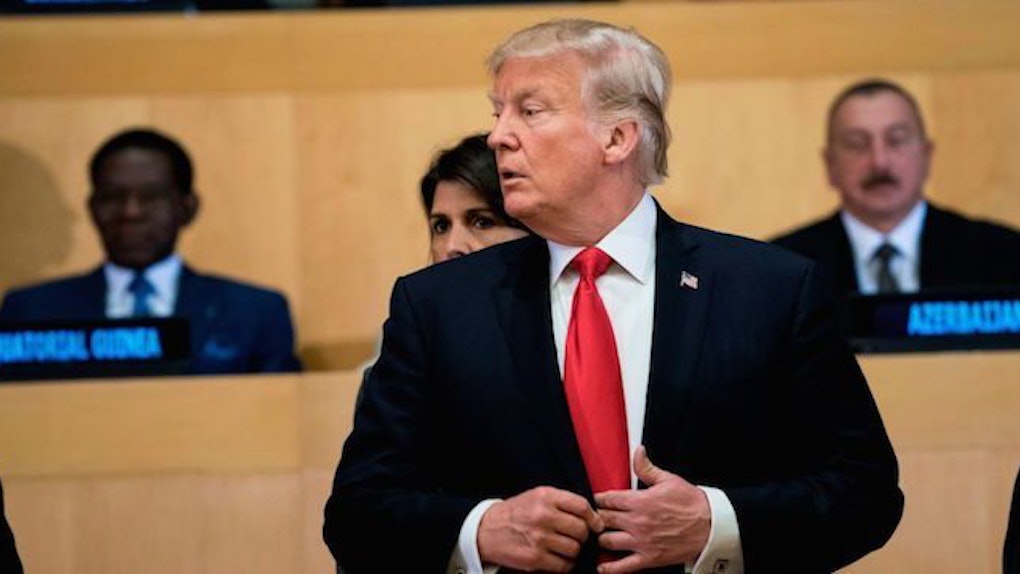 Will North Korea Declare War On The United States? Even If We Don’t Go To War, Things Aren’t OK

It turns out that there's a very, very fine line between making aggressive military statements and declaring war. Namely, it's very possible that if one country threatens another country, that can actually be viewed as a really serious thing. At the very least, North Korean leader Kim Jong-un is operating under that assumption and has accused the United States of launching an all-out war. Which begs the very scary question – will North Korea declare war on the United States?

For the past few weeks, leaders of both nations have been teasing the idea of war — or, at the very least, military strikes. On Sept. 23, President Donald Trump tweeted out the following:

Just heard Foreign Minister of North Korea speak at U.N. If he echoes thoughts of Little Rocket Man, they won't be around much longer!

In case you haven't been following the quaint pissing competition Trump has been engaging in with North Korea, Rocket Man refers to Kim. This definitely isn't the first time that the president had made serious threats against North Korea. That same weekend, Trump said Kim was on "a suicide mission for himself and for his regime." He also declared that the United States would "totally destroy" North Korea if forced to.

So, no, Trump did not actually, literally declare war on North Korea. But that doesn't mean the country's leaders didn't take it that way. On Sept. 25 North Korea's Foreign Minister Ri Yong-ho told reporters that Trump had declared war, and that North Korea reserved the right to shoot down American military planes. He said,

Our goal is still the same. We continue to seek the peaceful denuclearization of the Korean peninsula.

What Sanders neglected to acknowledge, though, is that sometimes it's possible to get into messy, catastrophic military situations – without actually declaring war.

The United States has officially declared war 11 times. However, according a 2014 report from Public Radio International (PRI), the United States could be involved in a total of 134 wars ... depending on your definition of the word.

One definition, written by by Harvard Kennedy School's Linda Bilmes and UCLA's Michael Intriligator, suggests that war could be categorized as "conflicts where the US is launching extensive military incursions, including drone attacks, but that are not officially 'declared.'"

Plus, PRI noted, there's a difference between congressional declaration of war, and a president's own military commands. In April, for instance, Trump ordered a military strike on Syria without getting a vote from Congress. He was able to do so under the War Powers Resolution, which mandates that a president must report to Congress within 48 hours if he's entered the U.S. military into combat.

This did not exactly fly with some members of Congress.

The United States was not attacked. The president needs congressional authorization for military action as required by the Constitution, and I call on him to come to Congress for a proper debate.

Assad is a brutal dictator who must be held accountable for his actions. But President Trump has launched a military strike against Syria without a vote of Congress. The Constitution says war must be declared by Congress.

And even without war — or even the actual desire to go to war — threats and military posturing could go sour. Stratfor Vice President of Strategic Analysis Rodger Baker told CNN,

The North Koreans assume that the threats will be enough to restrain US action but the US might be thinking the same thing, so you end up in a situation where a provocation from one side is seen by the other as an actual move towards war.

The moral of the story? You don't have to declare war in order to get your country into a dangerous military situation. And also can the president please, PLEASE stop threatening North Korea.