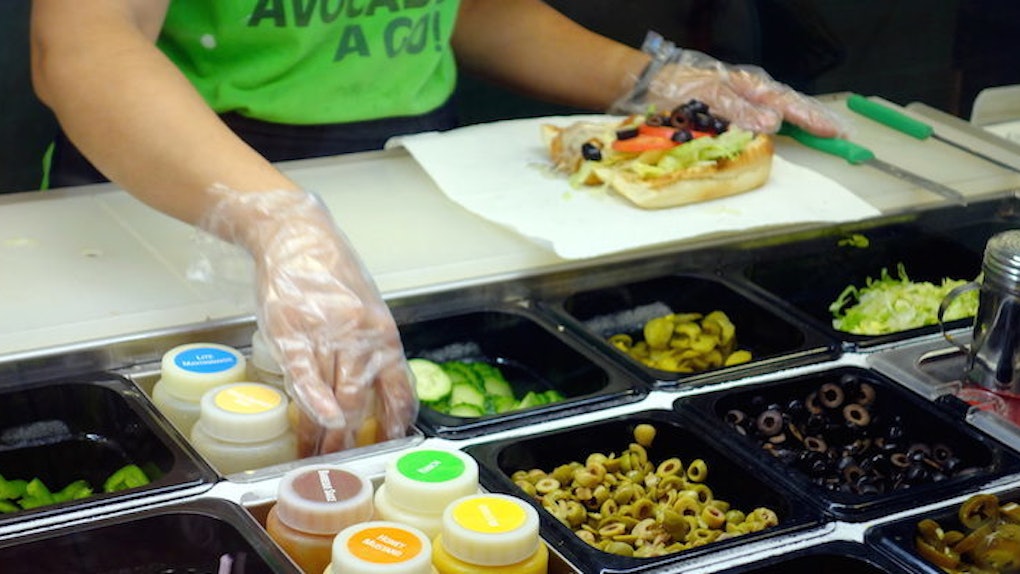 An Oregon man found a dead rodent in a Subway sandwich earlier this month.

According to KGW, the customer named Jay ordered an Italian sandwich at a Lincoln, Oregon Subway at around 2 pm on October 6 and asked for some spinach as a topping.

Matt Jones, a friend of the customer, got spinach on his teriyaki chicken sandwich just before him. Jay said the spinach on his order was the last spoonful from the sandwich maker's bin.

Jay was still at the counter when he discovered what appeared to be a dead mouse in between the spinach and the cheese, ABC News reports.

Look at that Beast of a mouse in the spinach at Subway today! Good thing we didn't bite into it! AMAZING! WTF!!! The manager was in shock! Posted by Matt Jones on Tuesday, October 6, 2015

Matt Jones, who took a picture of the sandwich, told KGW,

I got my drink, turned around and they were in shock like something happened. There was a mouse in there. It was gross.

Matt and Jay were given refunds on their sandwiches, and at least one health inspector from the Lincoln County Health Department arrived soon after.

After examining the dead animal and the spinach bin, an inspector scrupulously checked the restaurant for feces or any potentially harmful substances.

The investigation determined that the rodent problem did not come from inside the facility. It was probably in a bag of the bagged spinach product, not from the facility itself. Everything was sanitized and cleaned properly afterwards.

Health inspectors spoke to physicians who assured them there was a "very low" risk of someone growing ill after eating spinach from that bin.

Jones said he called Subway headquarters and suggested the franchise contact all customers of the Lincoln restaurant who had a sandwich with spinach that day.

But Connell said this was not necessary because the state's Public Health Division did not deem the incident a public health emergency.

Subway issued a statement to KGW on the matter. It said,

As soon as the customer alerted the owner about what happened, they were immediately given a full refund and an investigation was launched. To be cautious, all of the products in the sandwich unit were disposed of and a thorough cleaning took place, in which the Health Department gave the restaurant a clean bill of health. There were no other complaints made.

Connell added the restaurant manager exhibited the correct response to incidents of this nature.