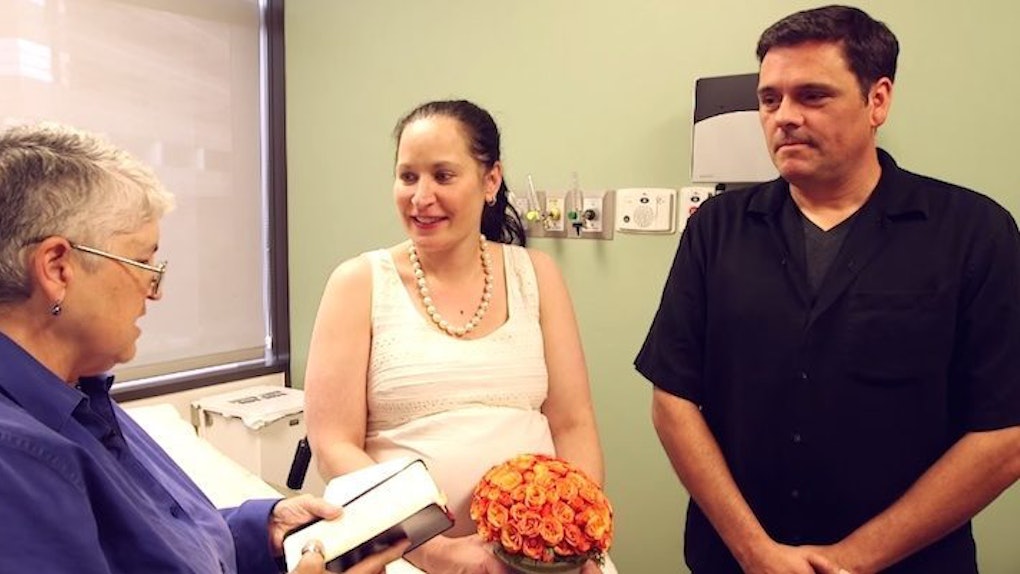 A Texas man and woman experienced two of the happiest moments of their lives in the same day.

According to PEOPLE, Stephanie Tallent and Jason Nece were at an ultrasound appointment at Texas Children's Hospital Pavilion for Women last Friday when doctors told Stephanie she was already in labor.

Tallent's Caesarean section wasn't scheduled for another three weeks, but the 41-year-old was dilated five centimeters at the Houston hospital.

Nece and Tallent, however, previously agreed they would not have a baby without getting married first.

I was surprised at first. But then I realized, [Tallent] needed to do it. It was so important to her. We didn't have much time, but I said 'yes.'

Luckily, the couple obtained a marriage license just a day before and wanted to take a white maternity sundress to the dry cleaners.

Both items were reportedly waiting in the car to be snatched by Nece.

In another room, Tallent made a short phone call to her family about the wedding. She emerged to find about 25 hospital staff members ready to witness the couple quickly read the wedding vows.

I thought it would be two seconds with the chaplain, and we would be married. They did a full ceremony.

Tallent received a bouquet from Dr. Wagner, a pearl necklace from a nurse and a staff member even provided an a cappella serenade.

Dr. Wagner guided Tallent down a hallway to an exam room as Felix Mendelssohn's “Wedding March” played from a nurse's cell phone.

It was here where Stephanie met Jason and Chaplain Johnna Faber, who pronounced them man and wife.

They put me in a wheelchair. They put a sign on it that said, 'Just Married,' and away I went.

The couple said they were incredibly impressed with the swiftness and dedication of the hospital workers.

Jason, who is a member of the Kansas National Guard, said,

They mobilize troops faster than a lot of our military officers can.

The timing of the two events will no doubt lead to brilliant celebrations every August 21 to come.

Citations: Texas Woman Gets Married While in Labor at Hospital (PEOPLE)