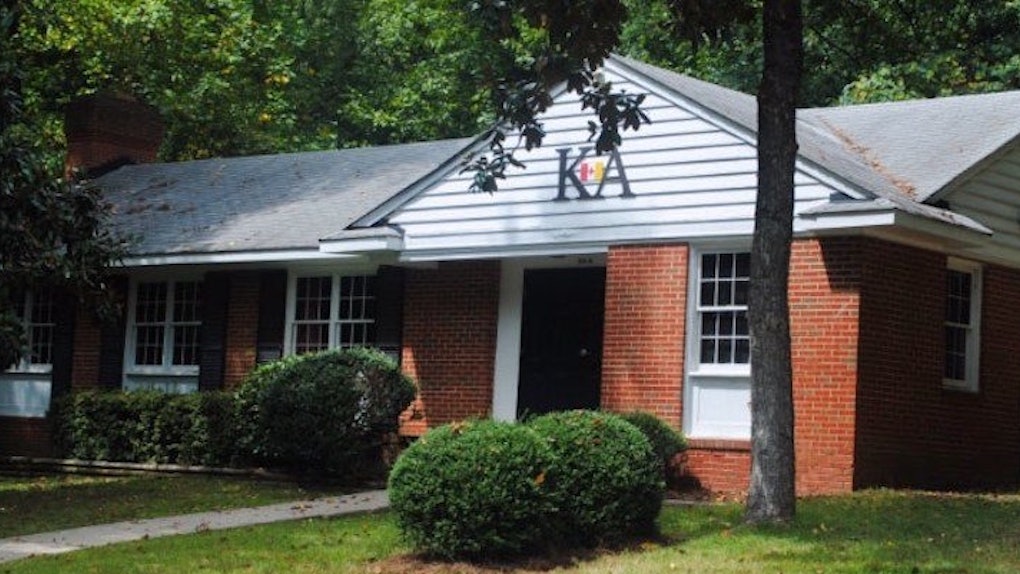 College Frat Suspended Over Email Encouraging Rape: 'The Wait Is Finally Over'

The University of Richmond's  Kappa Alpha Order chapter has been suspended in the wake of an email entitled "The wait is finally over." It was sent out by two students to 95 of its members, including freshman, in their first weeks of school.

The university took issue with the misogynist language the email used, stating,

The e-mail contained grossly offensive language and suggestions of behavior inconsistent with our policies concerning Greek life and with the caring nature of our campus community. As a result, the University has suspended all chapter operations, activities, and events pending a thorough investigation.

The language they're referring to is found in the sentences below, which came at the end of an email about a party the chapter was throwing that night. The sentences read,

Tonight's the type of night that makes fathers afraid to send their daughters away to school. Let's get it.

The email in question was sent on Friday, one week after Brock Turner was released from prison after serving only three months for sexual assaulting an unconscious woman behind a dumpster.

The fraternity's National Administrative Office responded to the scandal with this statement:

Due to actions contrary to those values and our Risk Management Policy, the chapter operations have been temporarily suspended at the University of Richmond pending the outcome of an in-depth, individual review and chapter investigation.

Some don't agree with the university's disciplinary actions, or that the use of this kind of language is even problematic.

As one reporter sees it,

This is as tame as it gets.

If they ever released the text messages from any random group of normal dudes between 16 and 55 in this country, the internet would implode from the amount of outrage it would generate.

Next, the reporter makes this impressive observation regarding the lives and minds of his female peers:

Even texts between a group of regular women are chock full of sexually charged, lewd conversations.

Wait, women talk about sex? Sempai, your wisdom overwhelms me! In my opinion, the writer here seems to not understand women saying “sexually charged” and “lewd” things in a group chat is light-years away from sending jokes about rape to 95 people.

The reporter ends with this delightful proclamation of compassion and grace:

Might be time for fraternities to adapt to the world's sensitivity and start communicating solely through word of mouth. No paper trail, guys.

The thing is, um, talking like this, even as a “joke," in hyper-masculine environments is a problem. First of all, I don't think it's funny. Second of all, one in five women are sexually assaulted in college. One in five. It's an emergency. Maybe it's time to stop defending shitty, unfunny jokes that so clearly propagate rape culture.

Listen, whether or not the senders of this email specifically intended to instigate or encourage sexual assault (even, and it disgusts me to even utter the word, “jokingly”) can be debated by people other than me.

But, look, even if that was not the active intention, it is clear, despite the fact that we are in a cultural climate where stories about college rape and assault permeate the public mind, language like this is so ubiquitous and entrenched in collegiate masculinity, these two men could ostensibly say something like this, which has such clear implications, and not realize how dangerous and scary it is -- not even realize they'd get in trouble.

After all, a sentiment like “let's make fathers afraid to send us their daughters” isn't something new.

I mean, the standard fucking marriage ceremony involves a father “giving away” his daughter to a man he presumably approves of and deems worthy of copulation with his daughter. It's an ongoing, decades-long American joke that dads desperately fear for their daughters' purity when they go off to college.

We've literally made and watched dozens and movies about a dad who “hilariously” and “charmingly” protects his daughter's sexuality like it belongs only to him.

And those same movies (OK, aside from "Meet The Parents") have glorified the men who sleep with those dad-policed daughters as “fun” and “cool” and “impressive.”

This is all to say, even if they didn't mean, “Let's go rape girls tonight” — which, in my personal opinion, I believe is, indeed, the “joke” they were making — the fact of the matter is saying super predatory stuff like this is so common and so widely practiced, it could be argued they're just imitating the language and sentiments of the culture they've grown up in and didn't literally mean to talk about sexual assault.

Just being able to make that argument is evidence alone of the existence and pervasiveness of rape culture.