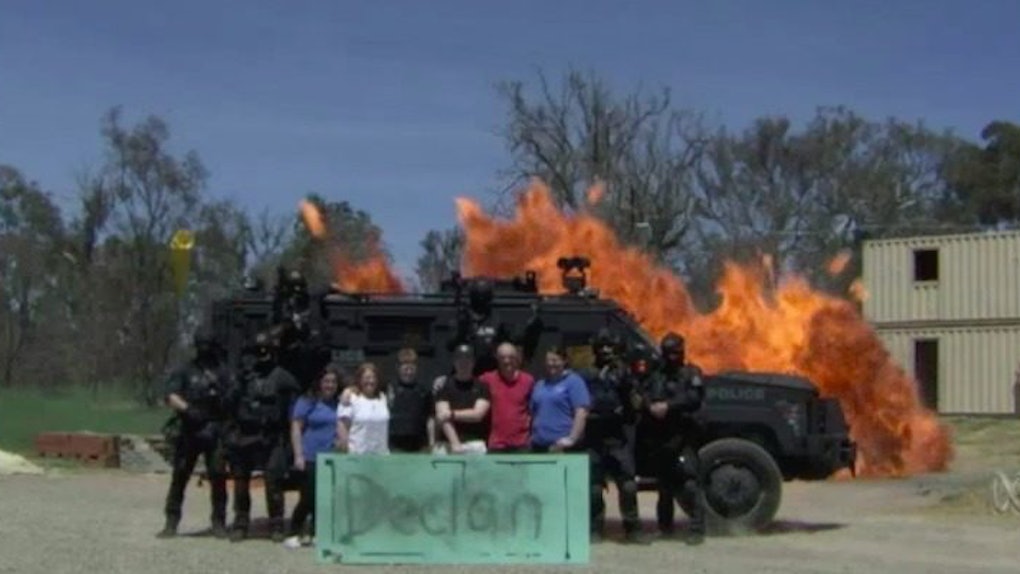 12-Year-Old Cancer Patient Blows Stuff Up As One Wish

Twelve-year-old Declan is an icon for humans everywhere.

The preteen is in remission from leukemia, which already makes him an icon.

But even better than that, he made one of the absolute best wishes for the Make-A-Wish Foundation, which grants wishes for children who are diagnosed with life-threatening illnesses.

These wishes can include things like meeting a favorite celebrity, going on a family vacation or becoming a superhero.

But Declan wished big. His one wish was to blow stuff up.

Declan, we salute you for that wish.

Make-A-Wish joined up with the Australian Federal Police to grant Declan his inspirational wish.

Declan got to blow a bunch of stuff up and said,

They gave us a charge and you had to pull the pin and hit the top of it.

After that, Declan had to hide behind something like a door and then something would blow up.

Declan blew up doors. He blew up a brick wall. He made bursts of flames appear from explosives.

He was working with the Australian Federal Police's breaching team.

I'm not sure what he actually expected, but once he started functioning a couple ... he was getting into it.

Murphy went on to say that Declan had fun and it appeared his family got a kick out of it, too.

He wanted to just blow something up and he did that, which was awesome.

I whole-heartedly agree with that assessment, Belinda.

Declan and his family also got to meet with Australian Prime Minister Malcolm Turnbull, which must have been just an OK experience after getting to set off a bunch of explosives.

This is one of the best uses of the Make-A-Wish Foundation that I have seen. Declan, you're a star.