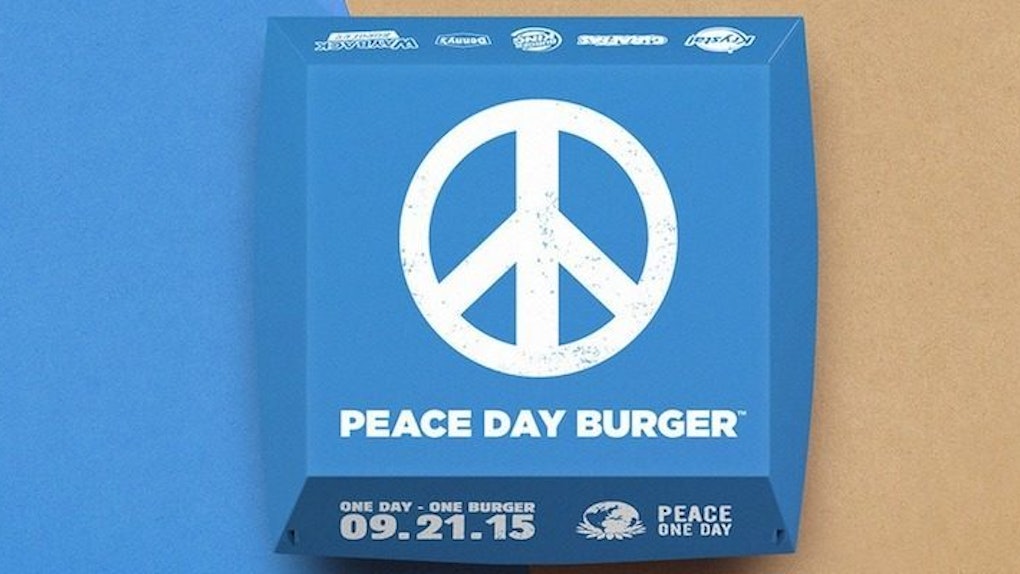 Burger King Is Making A 'Peace Burger' With Four Other Restaurants

SCREW YOU, MCDONALD'S! We didn't even want you anyway!

Exactly one week ago, Burger King sent an open letter to McDonald's, hoping to team up with the fast food giant to create a one-day-only Big Mac/Whopper hybrid called the “McWhopper.”

The idea was to serve the sandwich out of one location in Atlanta in honor of Peace One Day's Peace Day on September 21.

McDonald's apparently hated the idea and replied with a hard "no" to the proposal.

Dear Burger King, Inspiration for a good cause... great idea. We love the intention but think our two brands could... Posted by McDonald's on Wednesday, August 26, 2015

Two days later, Denny's offered its services up to Burger King and proposed a combination between the Whopper and its signature burger, the Slamburger.

First off, this burger looks soooo much better than the “McWhopper.”

A Whopper with hash browns and an egg? Are you kidding me? Why slum it with McDonald's when Denny's is offering this grill-top ambrosia?

Burger King remained mysteriously silent on the issue until yesterday, when it posted the following announcement to its Tumblr page.

According to the release, Burger King is officially joining forces with at least four other restaurants (Denny's, Wayback Burgers, Krystal and Giraffas) to come up with a burger for Peace Day that might very well bring about the end of days -- not for any bad reason, just because humanity would reach its peak with this sandwich.

Burger King's Twitter and Facebook pages are now also adorned with a picture of the blue peace box that will hold this historical achievement of meat and progress.

This is a day we will be telling our grandchildren about.

Citations: Burger King Agrees to Go Through With Its Peace Burger Collaboration After All (Grub Street)