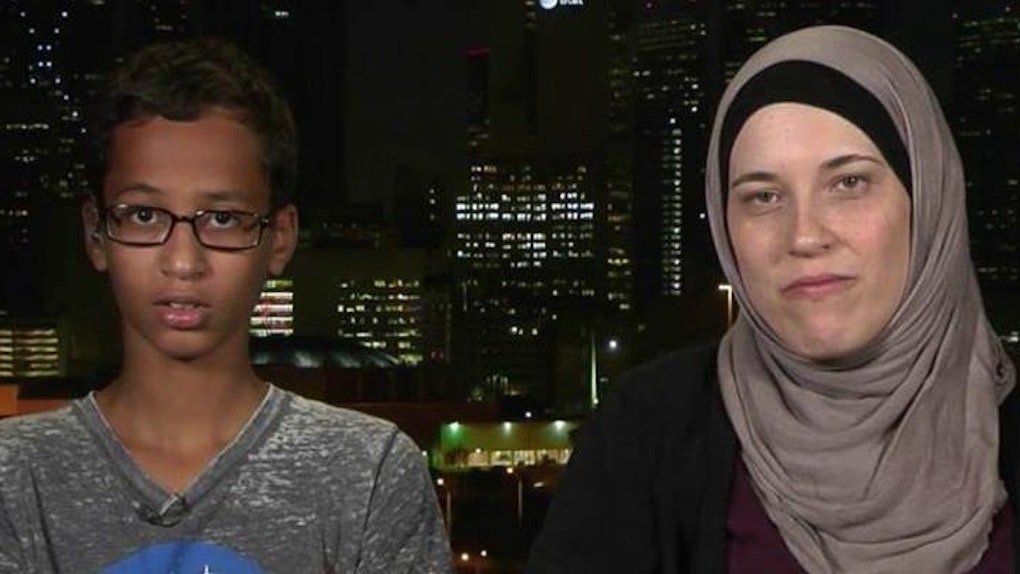 The Texas teenager arrested for bringing a homemade clock to school received an invitation to visit the college of his dreams.

At a news conference, Ahmed Mohamed explained the incident to reporters,

I built the clock to impress my teacher, but when I showed it to her, she thought it was a threat to her. It was really sad that she took the wrong impression from it.

Last night, MSNBC's Chris Hayes interviewed the 14-year-old, who was placed in handcuffs when the device he presented to his teacher at MacArthur High School on Monday was mistaken for a bomb.

After being thoroughly questioned at school, the aspiring engineer was taken to a detention center and released to his parents later that day.

Mohamed told Hayes the arrest made him feel like "a terrorist," a term he remembered being called by students in middle school.

But, the somber interview took an entirely different direction at the arrival of a surprise guest.

I just want to say, by the way, you are my ideal student. A creative, independent thinker like you is the kind of person who should be becoming a physicist. As a theoretical physicist, I would love it if you took an interest in the mathematical side, although you're clearly very adept with your hands and at building things.

Several major tech companies wasted no time in asking Mohamed to work for them as well.

Facebook founder Mark Zuckerberg, who certainly knows about getting into trouble over innovative endeavors, inquired about a chat.

You've probably seen the story about Ahmed, the 14 year old student in Texas who built a clock and was arrested when he... Posted by Mark Zuckerberg on Wednesday, September 16, 2015

Twitter got right to the point and offered him an internship.

The CEO of cloud company Box, however, believed he knew where Mohamed's true interests lie.

Ahmed, I know you've been invited to the White House and Facebook. But, we both know you're enterprise software guy at heart. Come by Box! — Aaron Levie (@levie) September 16, 2015

Mohamed was also invited to showcase his creation at a prestigious competition.

Alia Salem, director of the Dallas-Fort Worth chapter of the Council on American-Islamic Relations, told Huffington Post Mohamed would not have been arrested if he had a name more like "Jimmy."

She added Ahmed's family is currently debating whether or not to pursue legal action against the officials who partook in his arrest.

Citations: From Handcuffs To MIT 14YearOld Ahmed Mohamed Gets Surprise Invite (Huffington Post), All In Exclusive with Ahmed Mohamed (MSNBC)